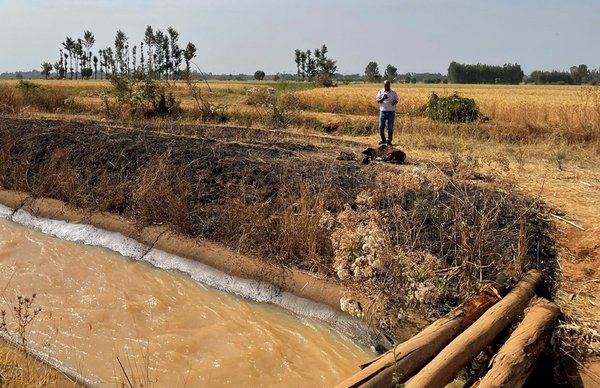 The Ethiopian government is planning to expand regional wheat production to be fully self-sufficient by the end of 2023.
Photo: © GIZ

Many countries depend on grain imports from Ukraine. Due to the war, poorer countries in particular are now facing famine. Innovative approaches are needed.

Together, Russia and Ukraine account for around 20 per cent of the world’s maize exports and 30 per cent of global wheat exports. The war in Ukraine is, therefore, impacting the entire globe. Not only are energy prices being pushed up - food prices have also risen significantly. Production in Ukraine has collapsed and supply chains have disintegrated.

Experts fear particularly dramatic consequences for the poorest people, for instance in Africa, who already spend most of their income on food. Countries like Libya and Ethiopia are especially dependent on grain imports. Ethiopia currently imports a quarter of its wheat requirements from Ukraine. The conflict and the disintegration of supply chains are posing new challenges for the country and causing it to rethink its agriculture.

For years now, the Ethiopian Government has been planning to expand domestic productivity to make the country less dependent on grain imports. The aim is for regional wheat production to be fully self-sufficient by the end of 2023 and to meet the supply requirements of Ethiopia’s 115 million inhabitants. On behalf of the German Federal Ministry for Economic Cooperation and Development (BMZ), the Deutsche Gesellschaft für Internationale Zusammenarbeit (GIZ) GmbH is supporting Ethiopia’s Ministry of Agriculture in achieving this goal.

Last year, the Ethiopian Ministry of Agriculture launched a pilot wheat production project on an area one and a half times the size of the German state of Saarland. GIZ is supporting the initiative, providing training and advice on innovative and sustainable farming methods.

Together with the International Maize and Wheat Improvement Center (CIMMYT), GIZ has been working on behalf of BMZ since 2021 to test a variety of farming and irrigation techniques for wheat cultivation. This wheat also thrives in the dry season, giving farmers two harvest seasons. Improved techniques and adapted seed ensure that the soil receives sufficient nutrients. This enhances the quality of the grain and improves harvests without leaching the soil. In a test phase, the Innovation Centre trained 143 groups of young farmers in sustainable farming and irrigation methods. During this year’s dry season, they produced almost 120 tonnes of wheat on 43.5 hectares of land.

The harvest from the state pilot project is impressive. Over one million tonnes of additional wheat were harvested on 400,000 hectares. Next year, the land is to be increased to one million hectares. The planned additional production of 3.5 million tonnes is roughly equivalent to the amount needed to achieve Ethiopia’s goal of becoming independent from wheat imports from countries like Ukraine.

Project: Green Innovation Centres for the agriculture and food sector