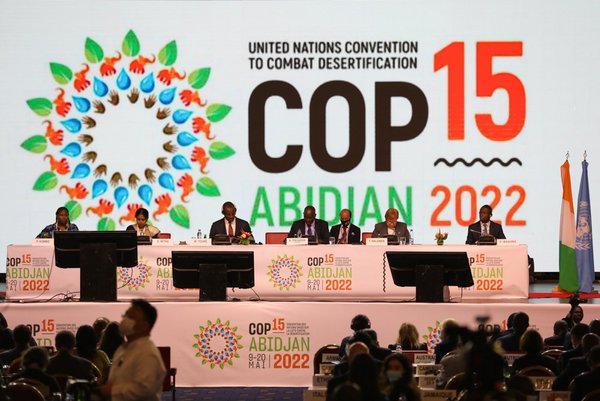 Panel discussion on land regeneration and the role of youth at COP15.
Photo: © IISD/ENB | Kiara Worth

At COP15 Parties committed on accelerating the restoration of one billion hectares of degraded land by 2030, boosting drought resilience and ensuring greater synergies among the three Rio Conventions.

The Conference of the Parties (COP15) to the United Nations Convention to Combat Desertification (UNCCD), which took place in in Abidjan/Côte d’Ivoire, from the 9th-20th May under the theme “Land. Life. Legacy: From scarcity to prosperity”, was the first of the three Rio Conventions meetings to be held in 2022, with Biodiversity COP15 and Climate change COP27 convening later on in Kunming, China and Sharm El-Sheikh, Egypt, respectively.

This two-week meeting on the future of land management drew nearly 7,000 participants, including Heads of State, ministers, delegates from the UNCCD’s 196 Parties and the European Union, as well as members of the private sector, civil society, women, youth leaders and media.

UNCCD COP15 adopts 38 decisions, including on tenure, migration and gender, which highlight the role of land in addressing multiple crises.

The Abidjan Call for action

The Heads of State Summit concluded with the adoption of Abidjan Call, which urges giving the highest priority to the issue of drought and reinforces the commitment towards achieving land degradation neutrality by 2030. The leaders’ call to action comes in response to a stark warning by the UNCCD that up to 40 per cent of all ice-free land is already degraded, with dire consequences for climate, biodiversity and livelihoods.

Business as usual will, by 2050, result in degradation of 16 million square kilometres (almost the size of South America), with 69 gigatonnes of carbon emitted into the atmosphere. But land restoration would help reduce the estimated number of 700 million people at risk of being displaced by drought by 2030.

In The COP15 “Land, Life and Legacy” Declaration, Ministers and Representatives respond to the findings of the UNCCD’s flagship report, Global Land Outlook 2, released in April. They “urge Parties to take a proactive, comprehensive, and holistic approach towards sand and dust storms, source mitigation and drought impact mitigation, adaptation and resilience, including through responsive policy frameworks that incorporate early warning systems and timely interventions, scientific collaboration, and multi-stakeholder partnerships which should be sustained with adequate levels of finance.”

During the Gender Caucus convened alongside the Heads of State Summit, a new study entitled Differentiated Impacts of Desertification, Land Degradation and Drought on Women and Men was launched that shed light on the disproportionate impacts women and girls are facing when land is degraded.

In the Abidjan Declaration on achieving gender equality for successful land restoration, which emerged from the Gender Caucus, parties agreed to “Promote all necessary measures to identify and eliminate all forms of discrimination against women in the context of fighting against desertification/land degradation, and drought (DLDD), in relation to land tenure security and access to, ownership of, and control over land and natural resources, and other forms of property and inheritance, with particular attention on the rights of older women, widows, women with disabilities and young women.”

Humanity is “at a crossroads” when it comes to managing drought, and accelerating mitigation must be done “urgently, using every tool we can,” says the report Drought In Numbers, 2022, released by UNCCD at COP15. The report provides drought-related facts and figures, including a 29 per cent rise in droughts since 2000 and a projection that three-quarters of the world’s population will be affected by drought by 2050 unless urgent action is taken.

The report warns that, unless action is stepped up:

The new UNCCD report notes that 128 countries have expressed willingness to achieve or exceed Land Degradation Neutrality. And nearly 70 countries have participated in the UNCCD’s global drought initiative, which aims to shift from reactive approaches to drought to a proactive and risk-reducing strategy.

Stepping up global action on drought

New initiatives launched at COP15 seek to step up efforts to fight desertification and drought:

Future meetings of the Conference of the Parties to the UNCCD and its subsidiary bodies will be held in Saudi Arabia (COP16 in 2024), Mongolia (COP17 in 2026) and Uzbekistan (Committee for the Review of the Implementation of the Convention in 2023).