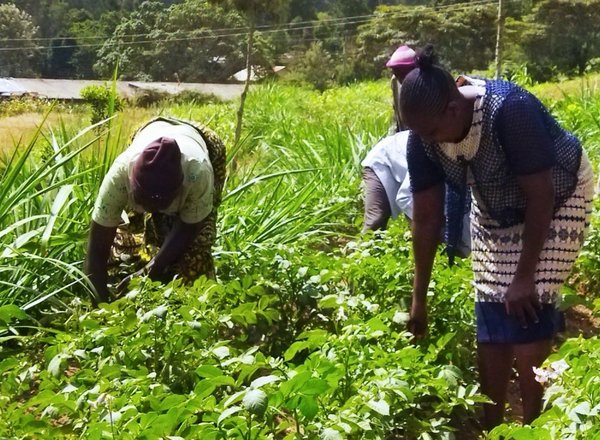 Martha Mwakina is joined by her group members on her farm in Taita Taveta County.
© Photo: Mercy Gakii

As land sizes shrink and population numbers continue to grow by huge margins, farming is the less preferred economic activity for many young people in Kenya. But in one county, there are good returns in potatoes if only the farmers are willing to get their hands dirty. With a start-up capital of Kenya Shillings 20,000 for one season, a farmer can make up to three times this amount in profit.

Ordinarily, not many young people are patient enough to wait six months before harvesting a crop of maize. Hence, the young generation has shied away from agricultural activities, instead shifting to urban areas in search of jobs and an alternative livelihood. But the narrative is changing for residents of Werugha location, in Wundanyi Constituency, in Taita Taveta County, south-eastern Kenya.

“More young people are willing to get their hands dirty because within three months, they have their potato harvest and cash in their pockets,” comments Anthony Kariku, the coordinator of the Irish potato project in the county. The demand is so high that farmers sell their produce right from the farm to the Taita Taveta Potato Farmers’ Co-operative society. The Co-operative Society then sells it on to the farmers to help them meet potato production standards.

The farms in the highland areas of Wundanyi have been divided down to eighths, and renting an acre for a year costs KSh 20,000, quite an expensive price.

Interestingly, potato farming in Taita Taveta County has nevertheless increased immensely, with land under potato crop going up tenfold, from 50 hectares to 500 hectares in under two years, county executive member for Agriculture, Livestock and Fisheries Davis Mwangoma comments. This is because there is a ready market for the harvest, hence ready cash for farmers. Another reason is the quick turnaround time from planting to harvesting. It only takes three months between farm and markets.

Martha Mwakina is the secretary of the Mbang’amboi Farmers’ Self-Help Group. She also represents the youth, whom she encourages to rethink farming as a business. Her group is among 80 Common Interest Groups (CIGs) that form the membership of the Taita Taveta Potato Farmers Co-operative society. Started in 2008, the group is now made up of 20 members, who are all farming potatoes on their farms. The group began by planting snow peas, French beans among other horticultural crops. The farmer groups are the ones that come together, and form a co-operative. The co-operative benefits the farmer by selling their produce at better prices than if an individual farmer sells from their farm gate. The co-operative also has a better chance to be approached by the government when the government wants to pass information to farmers.

In 2020, the group got certified by Kenyan regulator Kenya Plant Health Inspectorate Services (KEPHIS) as a potato seed bulker, or producer.

“The county government together with KEPHIS, Climate Smart Agriculture, and the Accelerated Value Chain Development (AVCD) trained and mentored the farmers in the farming of this crop,” says Martha while working on her farm.

In the first season, the group planted 12 bags of the Shangi potato seed variety, a very popular potato variety in Kenya thanks to its short maturation span of two and a half months, and made Ksh 154,000 from the harvest of 70 bags. In the second season, the group still planted the same variety, using 10 bags of seed, but only harvested 29 bags due to rain shortage and they only made Ksh 54,000.

The Kenya Climate Smart Agriculture Project (KCSAP) is a government project supported by the World Bank. KCSAP is being implemented from 2017 to 2022 under the framework of the Agriculture Sector Development Strategy (ASDS – 2010-2020) and the National Climate Change Response Strategy (NCCRS, 2010). The development objective of KCSAP is to increase agricultural productivity and enhance resilience and copying mechanisms given climate change risks in the targeted smallholder farming and pastoral communities in arid and semiarid areas in Kenya – and in the event of an eligible crisis or emergency, to provide immediate and effective response.

The Accelerated Institutional and Food Systems (AIFSD) programme is implemented by the International Crops Research Institute for the Semi-Arid Tropics (ICRISAT) in the AIFSD's drought-tolerant crops value chain component in the country.

The group approached a microfinance organisation for a loan facility, getting Ksh 130,000 to boost their farming.

This time round, they planted 20 bags of the Unica seed variety on 1.25 acres of land and harvested 79 bags of potatoes and making a cool Ksh 237,000. The income enabled clearing the loan, and continuation of their agriculture activities.

In the past, they could only get certified seed from the few production companies based in ADC Molo in Nakuru county, or Tigoni in Kiambu county, Kisima farm in Meru County and National Youth Service Tumaini in Nyandarua county. This was a very costly endeavour due given the great distance.

“For now, we are happy to be supplying farmers in Taita Taveta County with certified seed. Farmers do not have to go through extra costs sourcing for seed from outside the county,” Martha said. Costs of transport alone could go up to Ksh1,000 per bag of seed, depending on where they were buying the seed.

Although farming is promising good returns, farmers have to contend with a number of challenges, key among them erratic rains, cost of fertiliser, fees and levies paid for continued certification processes, and challenges of keeping up with the standards set by KEPHIS.

The low soil fertility in the area forces them to buy and apply additional fertiliser whenever they are farming. The farmers are using crop rotation to improve soil health before they replant potatoes later in the year.

They must pay for soil testing before planting every season, which costs Ksh 4,000 per sample. Bringing in specialists from KEPHIS to visit their farms will further cause a dent in their pockets because the farmers must foot their fuel bill, which is charged at Ksh 58 per kilometre.

Rain shortage is another problem. “When the rains are good, we use them in our farming. However, when the rains are low, we look for alternatives, including irrigation,” comments Renson Kifumbo, the group chairman. The land size is another big challenge. One “good” problem for the group is that they are still unable to meet demand for seed within their county.

Before the group were certified, costs of buying seed and transport were also quite high, but since certification, they have cut those costs by up to 90 per cent, Kifumbo, who doubles as the marketing officer, adds.

The group benefited from agronomy training from the International Potato Centre (CIP) in 2019 and were initially certified by KALRO.

Consumption of potato-based meals is on the rise, comments Reuben Kamau, the CIP field extension officer with the AIFSD project in the county.

“People’s lifestyles are changing over time. There is preference for food that does not take long to cook, such as French fries, mashed potatoes, Viazi karai and other potato-based meals. Population is also on the rise, hence feeding these numbers exerts demand for potatoes,” he says.

Therefore, the crop is popular with younger farmers, especially because it only takes between two and three months to grow. So far, by end of 2021, there were 3,200 farmers doing potato seed production in the county.

A similar movement is taking place in neighbouring Makueni County. Farmer Catherine Mbili uses value addition as the secret to making a profit.

She plants sorghum, pigeon peas, green grams and pearl millet among other drought-tolerant crops on her more than five acres of farmland in Makueni, which is in the arid and semi-arid lands in Kenya.

Catherine has been doing commercial farming for close to a decade now, after getting into the now lucrative agribusiness sector in 2014. Not only does she sell the harvested crops, she has started another business where she bakes cakes using pearl millet, cooks traditional porridge using sorghum and then sells these products in the nearby Kathonzweni Market.

She also trains farmers on agribusiness techniques, which include the latest farming technologies to apply in their farming.

“I am training more than 400 farmers, and we can now see an improvement in their farming practices,” Catherine adds. The area, which is drought-prone, has suffered for decades, with people lacking food for their households during droughts.

Catherine says the locals were in the past accustomed to receiving relief food supplies from donors. This scenario was repeated almost every year when the famine hit the area, so the residents were assured of a source of food even if they did not embark on any farming activities. However, this changed over time as self-reliance became more attractive with agribusiness.

Mercy Gakii is a journalist with over 17 years of experience in the industry covering agriculture and business as a content creator, editor, book author and publisher. Contact