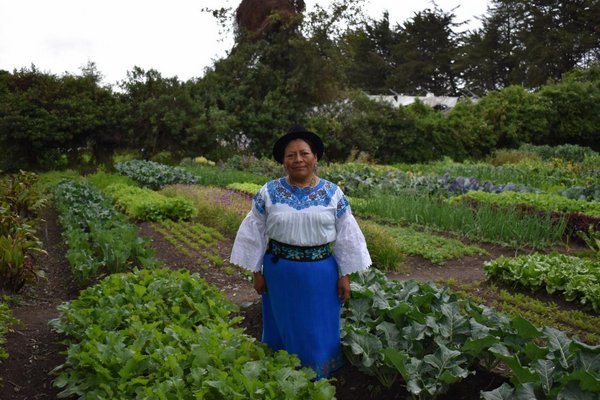 Erlinda Pillajo is an Ecuadorian farmer who has trained many of her peer, in organic farming.
Photo: ©IFOAM

On food and mountain agroecology

In many countries in the Global South, malnutrition is a cross-cutting issue with economic, societal and environmental impacts. Via an SDC-funded project carried out by IFOAM – Organics International, hundreds of mountain farmers have received training on a more diversified and ecologically-sound approach to agriculture, improving living conditions and reducing malnutrition.

Janet Duran Barrios lives in Ollabamba, a mountainous community close to the Peruvian Andes, over 700 km from the capital city. Looking proudly at her harvest, she says that she is now able to produce over 50 varieties of maize, all grown using natural methods and fertilisers that are safe for the environment. In the past few years, through the SDC-funded activities, the farmwoman has benefitted from the support, advice and guidance of her peers on the most effective means to diversify her crops, and on more sustainable practices to make her products healthier and better adapted to the market.

What exactly is the “Nutrition in Mountain Agroecosystems - NMA?

Remote regions such as Ms. Barrios’ are highly sensitive to weather patterns, natural disasters and soil erosion. Their inhabitants live mainly off the land and are subject to difficult living conditions, such as poverty and chronic food insecurity. In response, on the initiative of the Swiss Agency for Development and Cooperation (SDC), IFOAM developed a project aimed at reducing economic and food disparities between lowlands and highlands in eight specific mountainous regions in Nepal, Pakistan, Kyrgyzstan, Ethiopia, India, Tajikistan, Ecuador and Peru.

Launched in 2014 and having come to an end in late 2021, the NMA project addressed malnutrition in vulnerable populations, providing farmers, both women and men, with trainings on production methods responding to nutritional challenges while respecting the nature in the strained local environmental conditions.

This approach placed nutritionally high foods, diversified diets and food enrichment at the heart of the fight against malnutrition and micronutrient deficiencies. The programme fostered discussions and knowledge sharing, while providing the smallholder farmers with access to wider markets for their products. This bolstered the populations' resilience and facilitated skill-sharing among peers.

In Janet's native Peru, such as in the other countries of implementation, the NMA project has had positive feedbacks. With the support of IFOAM, these oft-forgotten smallholder farmers now enjoy greater recognition not only locally, but also regionally and nationally. In Lima, thanks to the efforts of some of these farmers, the national moratorium on Genetically-Modified Organisms farming was extended until 2035, thereby prompting local farmers to place greater emphasis on natural farming methods.

The NMA project has bolstered the social capital of marginalised people

As programme manager at the SDC, Marleen Heeb stresses the social impact that this project has had on local populations. "It is obvious that a number of once-isolated farming groups are now united. Since the NMA project was launched, there have been clear changes in these farmers' social perception, skills and overall influence," explained Heeb. Helping these farmers, who work the land in relative isolation, to come together and discuss healthier and more sustainable farming practices also helps break down the silos that once isolated them. Emulating their peers, many farmers are now following the path of agroecology. "Changing farming practices is risky, but they did it," said Heeb.