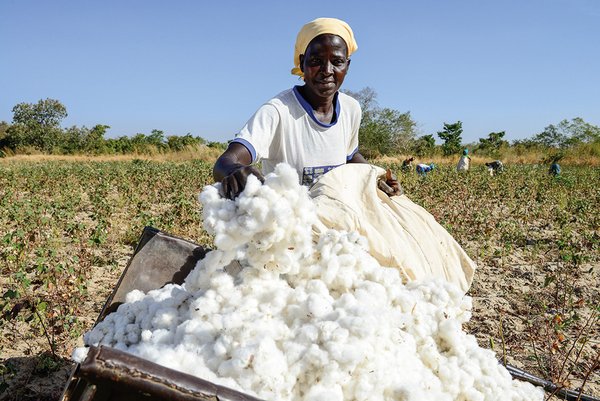 Burkina Faso is Africa’s biggest cotton producer. Monsanto, the US biotech giant, had its grip on cotton cultivation with its genetically modified seed contracts for almost ten years. But problems occurred and farmers demanded a return to traditional cotton. Whether they stay GM-free is doubtful.

Cotton is back! That’s the message Wilfried Yaméogo wants to tell the world. Wilfried Yaméogo (photo on the right) is head of Sofitex, the largely state-owned cotton company that controls 80 per cent of the cotton industry in Burkina Faso. And business is booming. Never before have farmers been producing so much cotton. There was a particularly successful harvest in 2016–17 with a total yield of more than 600,000 tonnes. Burkina Faso has reasserted its position as Africa’s number one in cotton production. “Thanks to our switch back to a hundred per cent conventional cotton cultivation,” explains Yaméogo.

Burkina Faso took its landmark decision at the end of 2016: “We say no to genetically modified cotton. We say no to Monsanto.” So has this small country in West Africa managed to chase away Monsanto? Has it forced out the giant corporation that, for many, is the very epitome of big business using its market power to deprive people in developing countries of any prospect of genuine development? “Doucement, doucement,” as they say in Burkina Faso. Not so fast.

When, in 2008, farmers first began the extensive planting of cotton seeds developed in US laboratories, the deal with Monsanto appeared to be their salvation. “White gold” production in West Africa had been in crisis since the 1990s. The archaic technology in Burkina Faso’s ginning factories dated back to French colonial times. Even worse, farmers had been faced with new crop infestations every year. First came the caterpillars, stripping the leaves until fields were bare, then the Whiteflies, turning the white fibres black on the cotton plants.

So Monsanto came with its GM seeds and the promise of effective pest resistance – and less need for spraying pesticides. Monsanto’s GM cotton is engineered to survive doses of Roundup, a herbicide based on the active ingredient glyphosate. The idea is that the herbicide kills off all harmful growth but leaves the GM crop intact. In theory, at least.

Whether it really all happened in this way is, at least, hotly disputed. But, perhaps, it is ultimately not even so important. For, suddenly, a disturbing discovery was made by the cotton processers, i.e. people like Anselme Kaboré, who works in the testing lab at Sofitex – the place where a small sample is taken from every bale of cotton and measured, weighed and classified to determine quality. And the better the quality, the higher the market price. The laboratory, certified under technical product documentation standard ISO 129, is a controlled environment: the air is cooled down to 21 centigrade, and humidity is kept at 65 per cent. Anselme Kaboré explains: “We found out that our cotton fibres had actually become too short.” Fibre lengths had shrunk by a whole millimetre after adopting Monsanto’s system.
Cotton produced in West Africa has long been renowned among industry experts for its longer fibres. “This meant losing our seal of quality,” says the Sofitex boss. On the fiercely competitive world market, this amounts to a debacle. Cotton is a product grown in many countries of the Global South, from China and India to South America via Tanzania and Mali, and the high-tech cotton producers in the US are still important competitors, too.

In Burkina Faso, out on the cotton fields where the white fibres grow on knee-high plants, cultivation and harvesting still involves hard manual labour. Bognini Boyoun is a farmer from Koumbia, near Bobo-Dioulasso, who has 16 hectares under crop. He pays his harvesters CFA 500 a day, and twelve are now at work. “They also get a hot meal,” he adds. Having used Monsanto’s product for a long time, he comments on the return to conventional cotton. “We heard that the world market was no longer happy with us.”

His own experience was mixed. On the one hand, he confirms that he had been able to reduce pesticide use. But, on the other, he had to pay much more for the seeds. “The conventional seed stock now costs around CFA 3,000 per hectare. I had been paying CFA 27,000 for the GM seeds,” Boyoun recalls while inspecting his field in the hot late-morning sunshine.

Is organic cotton an alternative?

“I can’t afford to do anything like that,” says Hélène Kabré. She is a cotton farmer from a small village a ninety-minute drive from the capital, Ouagadougou. To buy the modern seeds she would have to take out a loan. “But I’d never earn enough from my yield to pay back the money.” She owns her own field but found herself getting deeper into debt after her husband died. The widow now has to look after her six children on her own. She is relieved that at least the oldest has just joined the army and can earn a living – which, she remarks, is great as long as the country stays peaceful.

Hélène Kabré, along with her neighbours, began working on the harvest before eight this morning, picking the woolly white fibres from the plants, and hoping she won’t cut their hands on the hard spikey branches. On many other farms we find chemicals being sprayed without protective clothing and without proper supervision. But no chemicals are deployed on her field. Hélène Kabré is cultivating her cotton in accordance with organic methods. Instead of chemical fertiliser and pesticides, she applies manure and mulch. She also does crop rotation to ensure that soil quality is maintained.

Africa’s leading cotton producer – and yet a very poor country. Looking down the 188 countries in the Human Development Index, we find Burkina Faso in 185th position. The country’s roughly 19.5 million inhabitants are fighting the drought afflicting the Sahel region and face the spreading Sahara.

The great majority of village communities are completely dependent on agriculture. But crop yields from the small fields are often too meagre to secure the survival of families. Thousands try their luck in illegal goldmines, while others cross into Côte d'Ivoire as migrants seeking work on the harvest.

And yet there is typically a spirit of confidence and hope about the people of Burkina Faso, which means “The land of honest men”. This young democracy appears to have returned to stability after the recent upheavals of revolution, power shifts and an attempted coup.

Hélène Kabré earns less than the conventional cotton farmers. This is why organic cotton remains only a small niche business, accounting for just one per cent of Burkina Faso’s total output. But on the plus side, “We have so far managed to sell all the cotton we produce organically,” points out David Nana, a young member of the national cotton farmers’ association, l'Union Nationale des Producteurs de Coton du Burkina Faso (UNPCB). In the UNPCB’s view, farmers could grow more organic cotton if they could rely on secure purchase agreements. They also need organics-dedicated processing facilities to add value faster, since the existing ginning factories can only start on bio-cotton once all the conventional products have been processed. This leads to delays of up to six months. Fortunately, steps are being taken to change this. In a joint initiative run by the UNPCB, Sofitex and the Catholic Relief Services (CRS) from the US, a dedicated ginning factory is being built to handle organic cotton. The facility should be ready by 2019.

When Wilfried Yaméogo and Sofitex got Monsanto to leave, their case against the company included a hefty demand for compensation for the damage done: CFA 48 billion (76 million US dollars) for the broken promises of GM cotton. On the other hand, Monsanto were still owed several million in license fees for its seed stock and herbicide.

The two sides finally agreed an out-of-court settlement in March 2017. The people at Sofitex accepted CFA 11.3 billion – far less than their initial demand, but Sofitex’s director, Wilfried Yaméogo, took the view that a bad deal was better than a bad court ruling. A line had been drawn under the whole matter. “The Monsanto file is now closed,” he says. Really?

The problem is that another file remains open. “We’ve said goodbye to Monsanto,” adds Yaméogo, “but not to genetic engineering.” Contrary to what many think, the “no” to Monsanto is not automatically a “yes” to a traditional cotton industry. For Sofitex is looking for a new partner – this time one who can deliver the right length of fibre and thus the desired quality – along with the prospect of healthy profits on the world market.

What does the future hold?

Now the Germans have entered the arena. “We approached Bayer in December 2014, and Bayer are interested in principle,” says Yaméogo. Bayer of all companies. The group that began negotiations on a merger with its competitor Monsanto in 2016 and has since become a massive player in the agribusiness.

Yet merging the tradition-steeped German chemicals giant with the American seed king is proving more complicated than Bayer had anticipated. In summer 2018, a US court ruled against Monsanto, upholding the accusation that glyphosate products have caused cancer and ordering compensation to the terminally ill the plaintiff.

Even before this setback, the merger had been delayed due to all sorts of anti-trust obstacles – which is also why Burkina Faso’s Sofitex has had to hold back on any deal.

In February 2018, Sofitex’s boss said, “Bayer have promised to return to the negotiating table in the near future.” Although this has not been confirmed by Bayer headquarters in Leverkusen, it is worth noting that the company has since taken a majority share in Monsanto Burkina Faso SARL, as a list of group holdings from August 2018 shows. In a parallel development, Burkina Faso’s harvests in the 2017–2018 season turned out to be something of a disappointment following a record year in 2016–2017. Sofitex has not yet published exact data but it confirms that yields remain below expectations. This, Sofitex argues, had nothing to do with the phasing-out of GM cotton. Rather, the fall-off is due entirely to an unfavourable rainy season – as other cotton growing countries in the region, like Mali and Benin, can confirm. Indeed, the target boldly set for the 2018–2019 season is 800,000 tonnes.

Nevertheless, Wilfried Yaméogo won’t rule out GM. Bayer, he says, remains the best candidate for Burkinabe cotton production. He argues that the company already has experience with cotton production in Cameroon. The director of Sofitex thinks it might take as long as seven years for the two sides to agree a deal – and until then, the country’s industry wants to continue along the path of conventional cotton. So, yes, “Cotton is back!”, but before long we might be saying “Monsanto is back” in Burkina Faso.

Christian Selbherr is an editor and journalist with “missio magazin”, a journal published by the Catholic aid organisation missio, based in Munich.