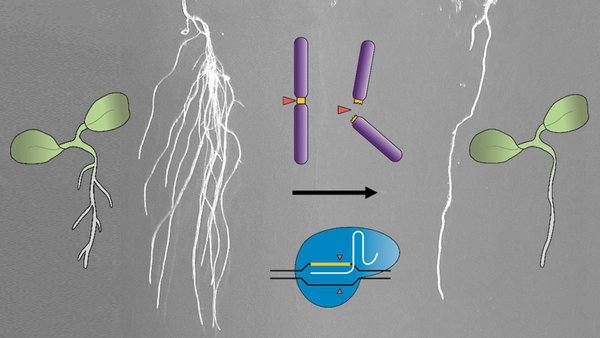 With the help of the CRISPR/Cas molecular scissors, genetic information in a plant can be modified to make the latter more robust to pests, diseases, or extreme climatic conditions. Researchers of Karlsruhe Institute of Technology (KIT)/Germany have now developed this method further to eliminate the complete DNA of specific cell types and, thus, prevent their formation during plant development.

By means of molecular scissors, DNA – the carrier of genetic information – can be modified in plants. So far, the CRISPR/Cas method co-developed in plants by Professor Holger Puchta, molecular biologist at KIT’s Botanical Institute has already been used to specifically insert, exchange or combine genes. The goal is to increase the plant’s resistance to diseases and environmental impacts. CRISPR/Cas are molecular scissors that can specifically recognise and cut DNA sequences. CRISPR stands for Clustered Regularly Interspaced Short Palindromic Repeats.

“We have studied molecular scissors for plant use for 30 years now. In the beginning, we applied them to modify individual genes. Two years ago, we were the first world-wide to restructure complete chromosomes,” Puchta says. For his research, the pioneer of genome editing twice received the renowned Advanced Grant of the European Research Council (ERC). “We were able to optimise this method. With CRISPR-Kill, we have reached now an entirely new level of development,” he adds. “We can eliminate certain plant cell types and prevent the formation of specific plant organs.”

The findings were presented in Nature Communication, in March 2022.

The experiments carried out by the scientists concentrated on secondary roots and petals of the model plant thale cress (Arabidopsis thaliana). “These are classical examples in biology. Here, we know the genetic programme and the cell types that are important for the formation of these plant organs,” Puchta explains. After the elimination of these cells, CRISPR-Kill plants no longer formed any petals or secondary roots, whereas the control plants exhibited normal growth.

Contrary to other methods that eliminate cells with cytotoxins or laser radiation, CRISPR-Kill induces multiple cuts in the genome. A genome consists of a certain number of chromosomes, on which the individual genes are arranged in fixed order.

“So far, CRISPR/Cas has aimed for exactly one location and has cut once or twice to modify a gene or chromosome,” Puchta says. “Now, we have reprogrammed our molecular scissors. They no longer address the genomic DNA only once, but aim in the respective cell type for a sequence that is encountered often in the genome and is essential for the survival of the cell. In this way, many cuts are induced at the same time – too many for the cell to repair them. The cell will die.”

The work of the KIT researchers can be classified as fundamental research. “By studying what happens when a certain cell type is eliminated, we learn more about the development processes in plants. How does the plant react? How flexible is the plant during development? Can we remove parts of plants that are not necessary in agriculture, for instance?” Puchta adds.

In the long term, food production and pharmaceutical applications might benefit from this technology when the plant is prevented from forming cells that produce toxins, for instance. Moreover, the technology might be applied in multi-cellular organisms for the specific modification of tissues.