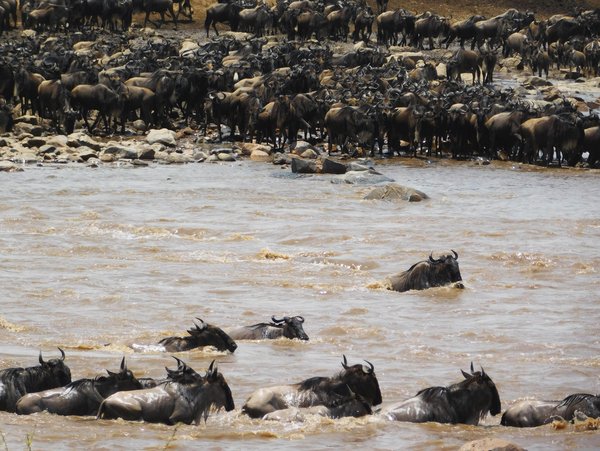 Pressure from human settlements around Serengeti National Park has become so great that animals are retreating further into the core zones, and often staying there. Researchers are warning that the consequences for the overall ecosystem are massive, and will soon be irreversible.

Scientists at the University of Hohenheim warned in April 2019 that one of the best-known nature reserves in the world is in danger. The cross-border Serengeti-Mara ecosystem covers 40,000 sq. km. and is famous for its biodiversity and impressive animal migrations.

Some two million animals, predominantly gnus, zebras and Thomson gazelles, follow the rains every year from the southern Serengeti in Tanzania to the north in the Kenyan Maasai Mara Reserve.

The heavy pressure from human settlements on the edges of the nature reserves and human activities in the marginal zones are driving the wild animals deeper and deeper into the core zones. This external pressure is having a massive impact on the ecosystem. Animal migrations are disrupted, the fire regime is changing and soil fertility is declining.

Stocks of the 15 most common wild animals in Maasai Mara have decreased by between 40 per cent and 93 per cent in the 40 years since 1977, falling equally within and outside the protected nature reserve.

Livestock are encroaching steadily on the reserve

There are buffer zones around the core zones of the Serengeti-Mara ecosystem which are used jointly by herders and wild animals. However, in the last few years population growth in these zones has been very high, with a resulting increase in the numbers of sheep, goats and cattle. Pasture is becoming scarce, and the herders and their animals are increasingly penetrating into the protected areas.

Aerial and satellite photographs show that the vegetation of the outer seven kilometres of the protected area is less green now than before. The grazing animals have also created a visible network of paths leading into the protected areas.

Consequences for the fire regime and soil fertility

The grass is being overgrazed, which deprives the fire of its food. However, fire is one of the characteristic elements of this ecosystem. The food sharing that the animals have previously practised is also becoming unbalanced. A further problem is that the soils on the heavily used areas are degrading. They are storing less carbohydrates, a sign of declining humus content and soil fertility. As a result, the productivity of the grasslands is decreasing.

Consequently, the migrations allowing the wild animals to find enough food is all the more important. Millions of animals make the great trip from the plains in the south-eastern Serengeti in Tanzania to the north in Maasai Mara in Kenya, and back.

But this annual natural spectacle is no longer functional. For example, the number of gnus on this route has fallen by 63.5 per cent since the 1970s. In addition, the animals still migrating to Maasai Mara are spending less time there than formerly.

Fences around the protected areas are no solution

More urgent solutions are needed to stop this process. The obvious idea of fencing in the protected areas completely has proved impractical. The areas are too small for the wild animals, they have to be able to leave them in the course of their migrations. Maintaining such fences is also very expensive, and meets little acceptance among the population.

Researchers believe it would be helpful to have the government regulate the number of animals, but note that nature conservation is difficult to achieve without the support of the local population. One possible approach would be communal grazing land, or a fund for compensating farmers and herders for nature conservation services.