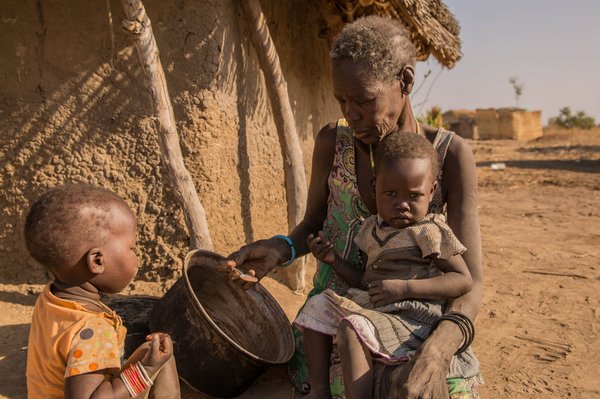 Children eating in Aweil, South Sudan, 2018. The lean season has left many families with little food and mothers are scrambling to survive.
Photo: ©FAO/Stefanie Glinski

The number of hungry people in Africa rose again between 2015 and 2017. 20 per cent of the African population was undernourished in the year 2017, most of them living in sub-Saharan Africa.

Hunger in Africa continues to rise, one in every five people is hungry in Africa, according to a joint UN report published in February 2019. This threatens the continent's hunger eradication efforts to meet the Malabo Goals 2025 and the 2030 Agenda for Sustainable Development, particularly Sustainable Development Goal 2 (SDG2, Zero Hunger).

More people continue to suffer from undernourishment in Africa than in any other region - evidence suggests that in 2017, 20 per cent of the African population was undernourished. Of the 257 million hungry people in Africa, 237 million are in sub-Saharan Africa and 20 million in Northern Africa.

In many countries, notably in Eastern and Southern Africa, adverse climatic conditions due to El Niño led to a decline in agricultural production and soaring staple food prices. The economic and climatic situation improved in 2017, but some countries continue to be affected by drought or poor rainfall.

Climate change is a present and growing threat to food security and nutrition in Africa, particularly to countries relying heavily on agriculture. The effects of climate change, reduced precipitation and higher temperatures negatively influence the yields of staple food crops.

What can be done to achieve SDG2 ?

Tackling youth employment and climate change are important to achieve SDG2, according to the report. The authors state that agriculture and the rural sector must play a key role in creating decent jobs for the 10 to 12 million young people that join the labour market each year.

At the same time, there are significant opportunities for agriculture in developing intra-African trade and harnessing remittances for development. Remittances from international and internal migration play an important role in reducing poverty and hunger as well as stimulating productive investments.

The signing of the African Continental Free Trade Area agreement provides an opportunity to accelerate growth and sustainable development by increasing trade, including trade in agricultural products, states the report. Although agricultural intra-African exports rose from USD 2 billion in 2000 to USD 13.7 billion in 2013, they remain relatively modest and often informal.

The report highlights that opening trading of food also carries risks to consumer and producer welfare, and governments should avoid using trade policy for multiple objectives but, to achieve food security and nutrition goals, they should rather combine trade reform with additional instruments, such as safety nets and risk-mitigating programmes.