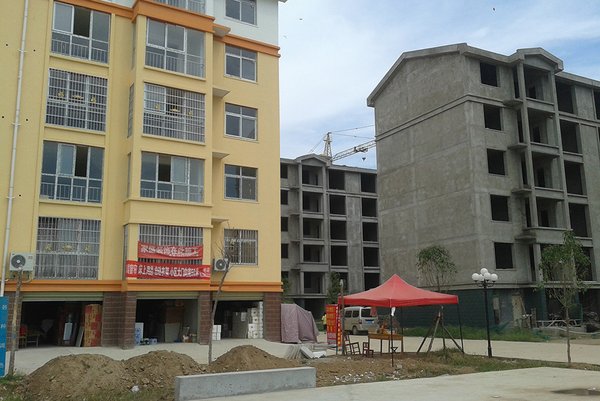 China’s political leadership has set out to “revitalise” the countryside and turn it into a pleasant place with “beautiful villages”. Only a decade ago, the leadership at the time had attempted something similar in the form of the large-scale “Building a New Socialist Countryside” programme. But China’s official vision of a rural modernisation based on fewer peasants and more industrialised agriculture has not changed. The question therefore remains whether rural regions and, above all, the rural population, are really going to benefit from the new policy.

China’s rapid urbanisation has not failed to leave its mark on the countryside. Over the past few decades, millions of people have left their villages to find work and a new life in the cities. Hundreds of thousands are still moving between the countryside and the city. Many villages have emptied out or are mainly inhabited by those who have been “left behind” in China’s migration movement: the elderly, the children and the disabled. Other villages have been swallowed up by the expanding cities – a process that has destroyed valuable farmland and left millions of peasants landless.

Mr Zhang (name changed) is a village party secretary in Henan province. In 2014, he led us through his tidy village just a few kilometres outside an economically ambitious county-city. The village seemed well-off. On the main road, people were meeting and talking, and children were playing. Only five years earlier, under the “Building a New Socialist Countryside” programme, the village had received financial support for renovation. Mr Zhang explained how they had built new, wide roads (some of them asphalt), cleaned up the village and renovated the houses. But, he sighed at the time of the interview, everything would soon be demolished, and everyone would have to relocate. The relocation area, a grey residential complex with four-story buildings located next-door to the original village, is called a “new rural community”. The first floor, which has rolling shutters, can be used as a shop or garage.

Such new communities have sprung up everywhere in the Chinese countryside. They often consist of several merged villages, and all of them have a modern, urban-like appearance. Villagers can purchase subsidised apartments, but in return, they usually have to demolish their old houses. As part of the “New Socialist Countryside” rural development programme, the new communities were praised as a solution to improve the provision of social welfare to residents of villages that were scattered or emptied out by migration. However, what made them particularly interesting for local governments was the more efficient use of rural construction land.

Construction land is becoming more and more precious in rapidly urbanising China, where urbanisation equals modernisation and GDP growth, and economic success produces political career opportunities for local officials. Moreover, local governments fill their coffers with land deals on the urban land market. Despite some pilot projects, a rural land market has not developed yet, and only China’s central and local governments hold the authority to expropriate rural land and convert it into urban land. In order to protect the country’s farmland, the central government allocates strict quotas for the different land types, and local governments cannot expropriate more farmland for urban expansion than the quotas allow. However, there is a loophole. If they increase the farmland quota in their locality, local governments, in turn, also have more construction land quota at their disposal. Thus, merging villages and constructing multi-story residential blocks in the countryside have become a popular means of saving construction land and winning more farmland. With the new quota, cities can continue to expropriate farmland on the urban fringe.

Confrontations between villagers and local governments or developers are a common phenomenon in China’s urbanisation process. Complaints refer to anything from violent demolitions and farmland expropriation to corruption and a lack of compensation payments. In 2006, there were an estimated 90,000 mass incidents, more than 60 per cent of which were over land disputes. Subsequently, no further numbers were published, but the trend was clear. Social unrest was growing and becoming more violent. The large-scale village demolitions of recent years have even drawn the attention of the urban middle classes, who fear the loss of cultural heritage.

The reluctance of many villagers to move into the “new rural communities” is also connected to the neglect or inability of several local governments, particularly in less prosperous agricultural regions, to turn the communities into liveable places. There is often a lack of infrastructure and service facilities, including an absence of public transport to the nearest city and, sometimes, low-quality construction. Planning and design reflect conceptions of modern urban life but may not reflect villagers’ demands. The younger generation often looks forward to having new apartments, but particularly the elderly, who cannot climb stairs and are used to having their own plot of land where they grow their vegetables and might even keep some animals, often find it difficult to adapt. Life in a residential complex with all its utilities, such as piped water, electricity and garbage disposal, is also more expensive than in a simple farmhouse.

Local governments, moreover, often channel the villagers’ compensation payments for the demolition of their houses and their relocation directly into purchasing new apartments. Finally, the “new communities” do not usually come with many new employment opportunities. In agricultural regions, this often means that villagers have to cover longer distances every day to reach their fields. When local governments manage to attract investors, villages can make deals to lease out their farmland. Then the villagers become low-skilled employees in agricultural enterprises. However, if the central or local governments expropriate their land for other kinds of development, the villagers will have to commute to the nearest city in order to find some work. But this is only an option for those who have their own vehicle.

In 2014, the political leadership introduced the plan for “new-type urbanisation”, which aims to put an end to large-scale village demolition and an urbanisation that is mainly motivated by local governments’ land grabbing. Instead, an improvement in rural migrants’ conditions in the cities and better protection of rural land rights are supposed to initiate the shift towards an urbanisation based on population demands. This year, the leadership introduced the policy of “rural revitalisation”. The goal is to revive the countryside as a pleasant place to live, improve environmental protection and preserve rural traditions. Not only large-scale industrial agriculture but also smaller agricultural undertakings are now expected to lead to agricultural restructuring.

In some places, the new policies have already led to a slowdown in demolition and relocation. For example, in the county that Mr Zhang’s village belongs to, the construction of several rural communities was halted. However, his village was located too close to the county city to be affected by the policy change. Local governments were able to redefine the project as an urban renovation project. Urban renovation is a strong focus in the new policies and can tap crucial funding. Thus, for local governments, it comes in handy that urban districts in China often cover vast rural areas. At any rate, in the village in Henan, demolition and relocation proceeded under the new policies, and by now, it has become a new area in an urban sub-district.

As this example shows, it is important for us to look at the local practices of policy implementation throughout China in order to know what the new policies really do. Will they only be drops in the bucket? Or can they make a difference? Whatever the case may be, China’s official vision of a rural modernisation based on fewer peasants and more industrialised agriculture has not changed. The only question that the political leadership is trying to answer is: How to get there without ever-growing social disruptions?

“New Socialist Countryside” and “Revitalisation of the Countryside”
“Building a New Socialist Countryside” was the rural development programme of the political leadership under President Hu Jintao (in office 2003–2013). The programme combined different old and new reform initiatives in the fields of infrastructure, housing, social welfare and agricultural restructuring. It was heavily subsidised and implemented in a campaign-like manner. At the time, it presented a new political awareness of the rural crisis.

In 2018, the current leadership under President Xi Jinping introduced the “Revitalisation of the Countryside” programme. Many aspects resemble earlier polices. Together with the programme for “New-Type Urbanisation”, however, the leadership has also disengaged from some shortcomings of the predecessors’ policies. In particular, rural revitalisation emphasises the protection of villages with specific characteristics and of rural traditions, the protection of the environment and the protection of villagers’ land rights. Concrete policies are still awaiting implementation.