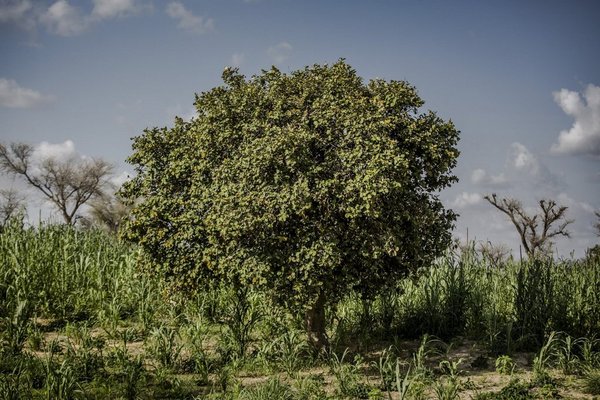 Tree in Nakonce village, Niger: when planting trees, the characteristics of the local ecosystem must be taken into consideration.
Photo: ©FAO/Luis Tato

According to an international team of scientists, the potential of planting trees for mitigating climate change has been dramatically overestimated. They warn that planting trees in the wrong place can actually destroy ecosystems, increase the intensity of forest fires and exacerbate global warming.

As trees sequester carbon through photosynthesis, several scientists and environmental groups see planting millions of trees as a solution for climate change. A group of 46 scientists from all over the world is calling for caution in an article in the October 2019 issue of the journal Science.

These scientists state that latest research shows how the potential of planting trees for mitigating climate change has been dramatically overestimated. While they agree that planting trees in logged areas can have positive effects, doing so in natural grasslands destroys ecosystems for plants and animals, and would not in any event sequester enough carbon to offset emissions from fossil fuels.

In their article, the authors criticise another article which recently appeared in Science by researchers at the Swiss Federal Institute of Technology (ETH) in Zurich. According to that article, global tree planting could compensate for 205 gigatons of carbon, or one third of all carbon dioxide emitted since the industrial revolution.

In their criticism, the new group writes that the Swiss research has serious flaws which led to overestimating the potential of new tree planting for mitigating climate change by a factor of five. Among other assumptions, the original study assumed that soils in treeless ecosystems do not contain carbon, although many ecosystems such as savannas and peat bogs sequester more carbon in the soil than in above-ground vegetation.

The new group further criticises that the original study also neglected the fact that conifers in moderate cold climate zones and high-altitude regions absorb more sunlight and emit more heat than treeless areas, so that they increase global warming rather than reducing it. The authors also warn that planting trees on grasslands and savannas, as proposed by the Swiss researchers, damages the environment.

Grasslands and savannas are home to an immense diversity of species and provide services to humans such as animal feed and groundwater recharge. They further note that a short-sighted focus on planting trees could reduce human resilience to climate change, and at the same time distract from efforts to preserve intact ecosystems and reduce consumption of fossil fuels. They call for ecological restoration which includes grasslands, savannas, shrublands and peat bogs, rather than focusing solely on forests.