Diversifying the range of crop and livestock species produced by smallholder farmers is often seen as a good strategy to improve their dietary diversity and nutrition. Based on data from different countries, we show that this link between production and consumption diversity is less strong than typically assumed. Market access plays a much more important role for dietary quality in farm households.

Hunger and malnutrition are complex global problems. In spite of improvements in food and nutrition security over the last decades, the prevalence of undernutrition remains high, especially in Africa and Asia. Close to 800 million people are still classified as chronically hungry, meaning that they do not have sufficient access to calories. An estimated two billion people suffer from micronutrient malnutrition, mostly due to low intakes of vitamins and minerals such as iron and zinc. Nutritional deficiencies are responsible for a large health burden in terms of lost productivity, impaired physical and mental human development, susceptibility to various diseases and premature deaths. Nutritional deficiencies are not only the result of low food quantities consumed, but also of poor dietary quality and diversity. In fact, indicators of dietary diversity are often used as proxies for people’s broader nutritional status because diverse diets facilitate balanced intakes of all essential nutrients.

Increasing dietary diversity is therefore an important strategy to improve nutrition and health. This implies that agricultural production also needs to be diversified, so that a wide range of different types of foods are available and accessible to poor population segments as well. Over the last 50 years, agricultural modernisation has contributed to narrowing global production patterns with a focus on a limited number of major crop plants.

In Africa and Asia, the majority of the undernourished people live in rural areas. Many of them are smallholder farmers. Against this background, further diversifying production on these smallholder farms is often perceived as a useful approach to improve dietary diversity and nutrition. Several recent development initiatives have promoted smallholder diversification through introducing additional crop and livestock species with the intention to improve household nutrition. As farm diversity can help to increase agrobiodiversity too, this approach is also welcome from an environmental angle. But is there really such a clear link between production diversity on the farm and consumption diversity in the farm household? And what other factors influence this relationship and dietary diversity in smallholder households more generally?

A positive relationship between farm production diversity and dietary diversity is plausible, as much of what smallholders produce is consumed at home. However, assuming that all smallholders are pure subsistence farmers without selling and buying any food is too simplistic. Taking into account market transactions, the relationship becomes more complex. Instead of producing everything at home, households can buy food diversity in the market when they generate sufficient income. Farm diversification may contribute to income growth and income stability up to a certain point, but beyond that point, further diversification may also reduce household income, because benefits from specialisation cannot be realised. As lower household incomes tend to be associated with lower dietary quality, the relationship between production and consumption diversity may even turn negative in some situations.

Beyond farming, most smallholder households in developing countries have off-farm sources of income as well, further adding to complexity. When relying on markets, nutrition effects in farm households will also depend on how well the markets function and who within the household controls the income from commercial farm sales and off-farm employment. It is known that gender aspects can play important roles in determining household food and nutrition security. Hence, the direction and strength of the production-consumption diversity link will be situation-specific.

In a recent study, we have analysed the role of production diversity and market access for farm household dietary diversity with data from various developing countries. In particular, we used more than 8,000 household-level observations from Ethiopia, Kenya, Malawi, and Indonesia (K.T. Sibhatu, V.V. Krishna, M. Qaim, 2015. Proc Natl Acad Sci USA 112: 10657-10662). We measured production diversity in terms of the number of crop and livestock species produced on a farm. Dietary diversity was measured in terms of the number of different food groups consumed by the farm household (see Table). 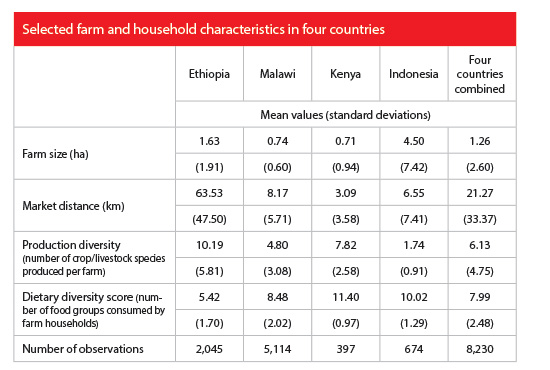 Regression models were used to analyse this relationship further and control for possible confounding factors, such as differences in education, gender, and household wealth. The results show that production diversity has a positive effect on dietary diversity. However, this effect is relatively small. On average, producing one additional crop or livestock species on the farm only leads to a one per cent increase in the number of food groups consumed by the farm household. The effect is smaller still in situations where the level of production diversity is already high, as is the case in many subsistence-oriented settings in Africa. In Ethiopia, for instance, the average farm produces ten different crop and livestock species (see Table).

We also analysed the role of market access by including additional explanatory variables into the regression models. Market proximity has positive effects on dietary diversity, and these effects are stronger than those of farm production diversity. Moreover, the effect of production diversity on household diets tends to decline with higher levels of market integration.
Selling farm produce significantly improves dietary quality, as the cash income generated allows households to purchase diverse foods from the market throughout the year. The average effect of commercial sales on household dietary diversity is five times stronger than that of producing one additional crop or livestock species on the farm. Hence, facilitating the commercialisation of smallholder farms is a better strategy to improve nutrition than promoting more diversified subsistence production.

We also found that households operating highly diversified farms tend to buy less diverse foods in the market. This is perhaps not surprising: if the farm produces diverse foods itself, diversity from the market may not be needed to the same extent. However, diversified own production cannot fully substitute for diversity from the market. Even subsistence farms often depend on market purchases for many food items, at least seasonally. In Ethiopia and Malawi, where the average degree of commercialisation is relatively low, farm households acquire 50 to 60 per cent of the foods consumed from the market. In Kenya and Indonesia, the share of market purchases is still higher than this.

Increasing people’s dietary diversity is an important strategy to improve nutrition and health. At aggregate level, this also requires diversification of agricultural systems. A research and policy focus on only a few cereal crops, as was sometimes observed during past decades, may have been useful to address issues of calorie undersupply, but seems less suitable to deal with problems of various nutritional deficiencies. While sustainably increasing the productivity of cereal crops remains a continuous challenge, agricultural research and policy efforts need to be broadened and also include the promotion of plant and animal species that were rather neglected in the past. Improved technologies and market potentials for a broader set of agricultural species would increase farmers’ incentives to adopt alternatives best suited to their conditions. The optimal mix will vary from one location to another. More diverse agricultural systems are also good for biodiversity and the environment.

Yet, this plea for more diverse agriculture should not be misunderstood in a way that every individual farm should increase the level of production diversity. Especially in smallholder systems of Africa, the number of different species produced is often quite high anyway. Resource-poor farmers diversify their sources of food and income as a risk-coping strategy. Our analysis with data from different African and Asian countries showed that farm production diversity is positively associated with dietary diversity in some situations, but not in all. When production diversity is already high, the dietary diversity relationship is not significant, or it even turns negative, because of foregone income resulting from farm diversification beyond economically optimal levels.

Our results also demonstrated that smallholder access to agricultural markets and off-farm employment has positive effects on household dietary diversity. In most cases, these market effects are stronger than those of increased production diversity. Comparisons show that more commercialised farms that produce cash crops for the market have more diverse diets than subsistence farms on average. Households with higher cash incomes tend to buy more diverse foods from the market. This food diversity from the market cannot be fully substituted through diverse subsistence production.

While improved market access often provides incentives for farmers to specialise, actual outcomes depend on many factors. Where properly functioning markets for various commodities exist, commercial orientation of farms and high levels of production diversity are not necessarily a contradiction. Markets and their functioning need to be strengthened to provide economic incentives to produce diverse foods. Without proper market incentives, a strategy to increase production diversity will rather foster subsistence, act against comparative advantage, and thus be associated with income losses for farm households.

The common assumption that higher farm production diversity is always conducive to household nutrition needs adjustment. The most suitable policy mix to improve nutrition in smallholder farm households will vary from case to case. In many situations, facilitating market access through improved infrastructure and other policies to reduce transaction costs and price distortions seems to be more promising than promoting further production diversification as such.