National offices of statistics as well as monitoring systems of development agencies tend to inform at household, farmer or family level, but often don’t go any further. To allocate resources, specifically to women, men, girls and boys, in a meaningful way, it is essential to make people visible by using gender and age group sensitive language and by describing the conditions and context under which these different groups of people are living.

Poverty reduction is at the core of sustainable development. Almost half of the world population – more than three billion people – still live in poverty. In order to make pro-gress towards global justice, security and sustainability, decent income and employment for 1.3 billion extreme poor need to be created, and 800 million people suffering from hunger need to reach food security. An analogue challenge was recognised already in 2000, when the Millennium Development Goals (MDG) process of 2000-2015 defined the eradication of extreme poverty as its first goal. Efforts to reach MDG 1 are relatively successful, because of robust results from countries like China, Vietnam, and Brazil. Finally, in September 2015, with the Sustainable Development Agenda 2030, the United Nations agreed to meet SDG 1 “to end poverty in all its forms” and SDG 2 “to end hunger (and all forms of malnutrition)’’ by 2030.

Multilateral and bilateral development agencies as well as many civil society organisations continue to focus on improving the economic and social situation of women, men and children living in poverty. But what do we really know about these people? To what extent do development agencies know the living conditions of their target groups? And what is the quality of solid gender and age sensitive data that development agencies generate? It is difficult to gain access to such knowledge-effective resource allocation for poverty reduction.

Information generated by National Statistics Offices often focus on household (HH) and estimate the average number of people living in a household or their overall household income. Such generic information ignores the most salient issues such as:

Solid data (statistics, large-scale studies) on these questions is difficult to find in spite of the fact that above questions are at the core of human social and economic development. Often, data is scattered, comprises small samples of men and women and lacks triangulation.
Aggregation of such sensitive and vital data is hardly possible, which is a reason why development policy discussions are often insufficiently informed. However if the real people hidden behind our beneficiary numbers or households remain invisible, developmental change will remain slow, and women and men, boys and girls will be left behind.

A look at practice

In development co-operation, the quality of Monitoring and Evaluation (M&E) data defines the degree to which people have been made visible as women, men, boys and girls living in specific social, economic and ecologic contexts or the degree to which those same people are hidden in unspecified households. But what does it look like in practice?

Precisely in order to examine this, the Swiss Agency for Development and Cooperation (SDC) conducted applied research on M&E in Country and Regional Programmes in Africa, Latin America and Asia. Language and formulation of outcomes and indicators were analysed and compared with the annual result reporting. One aim of the study was to identify areas for improvement in order to be able to produce reports with strong content for communication to the Swiss public and to the Government. A second aim was to generate lessons and best practices from the monitoring process, fostering in-house learning. But whereas M&E covers many aspects, the study concentrated on the degree to which people and target groups were made visible and distinct.

21 Country- and Regional Strategies with a strong focus on agriculture and food security as well as the corresponding annual reporting were analysed for the period 2013 to 2016. The Table below shows the areas of observation. It demonstrates that only in a third of all cases were the outcomes formulated in gender-sensitive language. Just a fifth of each indicator was formulated in an explicitly gender-sensitive manner or with an explicit poverty/inclusion focus. 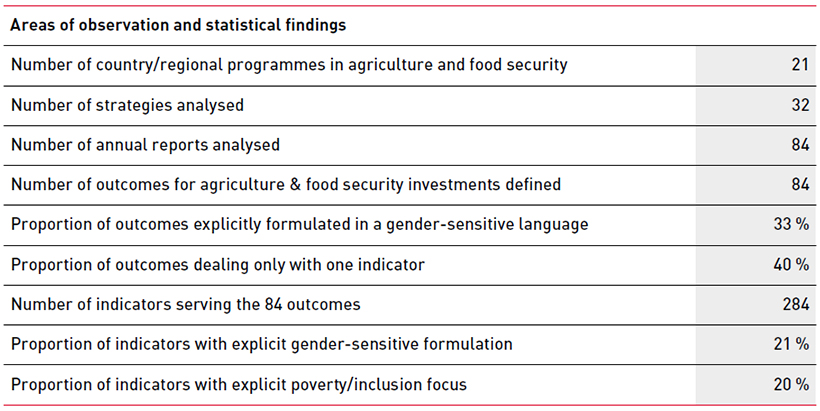 What does invisibility, respectively visibility mean in practice?

Statistics at national level often estimate indicators at household level. Words such as “person”, “family”, “herder”, “farmer”, “entrepreneur”, etc. are used. These terms are also often observed in reports of development projects. However, they are too unspecific to really make qualified assessments regarding the outcomes for the beneficiaries. The Table below shows the terms with which different degrees of visibility can be reached.

In multiple discussions with practitioners in the context of the studies, a number of challenges have been identified for M&E that are closely linked to the above problem. The most frequent ones concerned the following areas:

Complexity: Development processes are indeed complex, and this is even more the case in contexts that foreigners are not familiar with. It is demanding and requires the courage to deal with uncertainties and to reduce complexity to feasible and practical interventions. In principle, there is no alternative to reducing complexity and to tackling these issues, which offer highest development benefits (leverage). For development co-operation actors – foreign to the context of intervention – ensuring broad participation of different groups of a local population is the best way to integrate formerly invisible social dynamics and has a higher chance to generate sustainable improvements.

Result chains (outcome level): The most intense discussion in intercultural teams arises in debates over outcomes and indicators. To make people visible, gender differentiation and context qualifiers need to be integrated in the entire result chain, i.e. in the:

The extensive study of the 21 SDC Country/Regional Strategies revealed a high potential and a high willingness of teams to improve quickly in the area of monitoring and reporting.

The integration of visibility language and qualifiers (see Table) was tested in a number of programmes and is functioning. Observations have shown that agreed parameters such as indicators or baselines are either used for a longer period of time (time series), are used not at all or only partly. The latter is rather common. Hence, we are confronted with the paradox of wanting to capture complexity on the one hand and of being exposed to the practical limitations of monitoring practices on the other hand.

The baseline: Change is difficult to observe without a baseline (counterfactual). Quantitative changes in particular need points of reference or control groups. However, development projects are designed with a development ambition and rarely follow rigorous scientific designs. On the other hand, there is a legitimate expectation of taxpayers and decision-makers to receive high-quality progress reports. In the absence of baselines and control groups, qualitative sample interviews or focus group discussions – if well done – are producing good evidence on the results of activities as well. But in order to assess stringently the cause and effect of the intervention, a scientific design with control groups is needed. To observe a trend – often required in development co-operation – baselines fulfil the purpose. However, in situations with potential strong externalities like income and crop yields, baselines have strong limitations. Focus group discussions with men, women, girls and boys on aspirations and changes complement the picture and add to a high quality of result observations and reporting.

Finally, to make people visible in the four challenges mentioned above, gender-sensitive language as well as context qualifiers need to be integrated into all four areas – development interventions, result chains, monitoring systems and counterfactual/baseline.

1. Give leadership to those men and women who benefit from the intervention. Designing and implementing a development intervention that fits the context of people living in this given environment and gives them a role is the most empowering investment with a high visibility.

3. Apply the “magic words”: “visibility language” and “context qualifiers”. This is a must in any project design and monitoring system (see Table on top of page).

4. Involve women and men in monitoring and make it an empowering and learning process. Build a monitoring system that fits the context, uses the four elements as well as the “magic words” and links to the realities of men and women wanting to improve their life situation.

Felix Fellmann is in charge of the SDC climate programme in the Embassy of Switzerland in Beijing, China. He is an agronomist by background, has several decades of co-operation experience in African, Asian and Latin American countries and is passionate about improving evidence on the impact of development work. Until 2017, he led the Agriculture and Food Security Network of the Swiss Agency for Development and Cooperation (SDC) and partners.
Contact: Felix.Fellmann@eda.admin.ch

Sophie Hirsig works as a Programme Coordinator in the Asia Europe Division in the Swiss Red Cross. She has a MSc in Geography and is committed to improving equality and poverty data as a key factor in achieving impact in all programmes of development co-operation and humanitarian work. She co-facilitated the SDC Agriculture and Food Security Network until July 2017.
Contact: Sophie.Hirsig@redcross.ch

Ueli Mauderli has been the new SDC Focal Point of the Agriculture and Food Security network since August 2017. As a Natural Resources Management expert returning from his last assignment in Tanzania, he has witnessed the importance of benefiting the poorest in development activities, if goals balancing economic, social and ecologic sustainability are to be achieved.
Contact: ueli.mauderli@eda.admin.ch