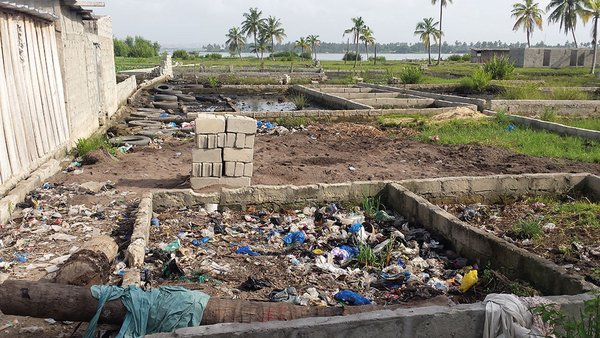 Most Abidjanais are not aware that they are literally walking on grounds made from household waste, rubble and sand.
Photo: Irit Eguavoen

Land reclamation for housing – the example of Côte d’Ivoire

Abidjan is a coastal metropolis, and is the economic capital of Côte d’Ivoire. The city’s topography in the south is dominated by the Atlantic Coast, as well as by numerous peninsulas and islands of the Ebrié Lagoon, whose natural waterfronts and lands used to be swampy grounds with dense mangrove and marsh plant vegetation.

The history of Abidjan and its economy, urbanisation, current form and pattern of spatial growth are closely intertwined with the use of the sea and the lagoon, as well as with the reclamation of water spaces as agricultural and building plots. The evolution of land spaces and some quarters through human-induced siltation and reclamation dates back about 60 to 70 years. Therefore, in everyday life, most Abidjanais are not aware that they are literally walking on grounds made from household waste, rubble and coffee ground, a by-product of the local coffee industry. Recently, large-scale land reclamation with sand for housing, seaports, industries and tourism has turned into a ubiquitous and highly visible sign of urban transformation in various places along Abidjan's waterfronts.

The history of the densely populated quarter Soweto Remblais, located at the lagoon front, is already inscribed in its name. The French verb remblayer means “to fill something up”. Located at the northern waterfront of the Bay of Koumassi, the quarter has its roots in a waste fill populated by poor families evicted from areas in Abidjan when these underwent urban restructuring during the early 1960s. By the 1980s, following more urbanisation projects and evictions, building plots were eventually in short supply. New residents began to incrementally reclaim the mangrove swamp.

The unplanned settlement grew into a slum which was upgraded and formalised under a World Bank Programme during the 1990s. After 2011, following the Ivorian civil war and the post-electoral crisis, the settlement received more inhabitants. It turned into a hot spot for land speculation and the construction of multi-storey rental apartment blocks (immeubles). When I came to Soweto Remblais in 2016, reclamation with sand from the lagoon in order to increase the size of building land had already begun. In 2019, I was strolling with Soweto residents on a newly established beach – actually more beautiful and cleaner than the Atlantic beach itself. By 2021, this wide beach had fully given place to new immeubles. For each immeuble, the ground was stabilised with rubble. Along the waterfront, the Koumassi mayor's office had approved a number of bars and eateries.

Such spatial transformation is nothing unusual. It also happens in other riverine and coastal African cities. In Abidjan, the process neither attracts political attention nor do civil society actors seem to contest what is happening – although they ought to. Land reclamation in its various manifestations has speeded up and is creating irreversible material realities with severe ecological and social-legal implications.

Water bodies, such as the Ebrié Lagoon, are first of all public spaces, and as such are protected by national law and maritime law. In Côte d'Ivoire, every riverine shore includes a 25 metre wide public demarcation zone starting from the natural shoreline. Within this zone, construction is prohibited in order to protect rivers, lakes and lagoons from human-induced damage and prevent water-related hazards among the population. The district government of Abidjan nevertheless gave out many waterfronts as long-term leases to private actors and investors, resulting in a quasi-privatisation of these public spaces for high-income groups and institutions.

The 25 metre zone requires a clear spatial and political definition of the natural shore line. If such a definition is absent, individuals, professional investors and riverine communities can push the shore deeper into the water body by reclaiming land as can be observed in Abidjan. They then use the new shoreline as a reference for a new 25 metre zone, with the reclaimed land behind constituting a legal grey zone. No secure land titles can be issued until the area is formally acknowledged and opened for privatisation by the district government.

Local fishers are losing out
Since the 1950s and earlier, the Ebrié Lagoon has attracted people from the Gulf of Guinea because of its rich fishery. Immigrants from what is today Ghana, Benin and Togo entered land arrangements with local fishermen's villages of the Ebrié, which are customary land owners in Abidjan. With the ongoing pollution and loss of lagoonal habitats, fish and crab stocks have decreased to the extent that women in fishermen villages have started to buy fish to smoke for sale because artisanal fishing no longer generates  sufficient harvest to support their livelihood. Today, most people in fishermen villages engage in other income-generating activities. Increased population pressure and progressing urbanisation are destabilising old land arrangements between some of the communities settled along the lagoon front and Ebrié villages, resulting in land conflicts and political tension between Ivorians and inhabitants of settlements with a migrant fishermen history.

Land reclamation is driven by different motivations, which also determine the speed of the process, the scale of spatial transformation, as well as the way water is turned into land. But whether slowly, incrementally and individually or rapidly, professionally and large-scale, ecological and socio-legal implications accumulate. At larger urban scales, they create new challenges or complicate political problem-solving for public authorities in the future.

On the new reclaim in Soweto Remblais, investors build without legal land titles on plots that are not developed. They speculate on a later formalisation and privatisation, a process which may take a few years or even decades. In the meantime, tenants live without proper urban infrastructure in a tolerated settlement. Soweto Remblais residents suffer from rough roads and inundations because sewers are lacking and the water table is high. I visited a family who experienced water flooding their home on the ground floor. Water was gushing down their walls because of construction flaws. These hazards reminded them of the fact that they were actually living where the lagoon used to be. Still, the family considered themselves lucky to have found the flat. In Abidjan, a metropolis of five million inhabitants, affordable rental housing is very hard to find.

It is not surprising that houses on reclaimed land in Adjahui (see Box below) were also prone to inundations. Frequently inundated areas in the unplanned settlement originate from the high water table and the low water infiltration capacity of the fluvial sands, which is further diminished by its increasing plastic waste content. Through land reclamation with waste, which conveniently resolves the local challenge of waste disposal, the peninsula is surrounded by an artificial plastic shore in many parts, which in turn complicates the flow of run-off to the lagoon. However, water damage in houses and inundated pathways does not bother most of the landlords. Many of them live in other quarters of Abidjan and rent out the residential units to households with very low incomes. As investors and speculators, they provide housing for tenants who are glad to have an affordable roof over their head.

Land reclamation practices in Abidjan
The most basic form of land reclamation is turning a swamp into an agricultural plot by removing the natural vegetation and mounding agricultural beds (see left photo). This practice is widespread in Port Bouët Municipality located in low-elevated areas between the ocean and the lagoon. Small-scale horticulture provides employment for a few thousand people. Here, vegetables are locally produced for the city population. Now, this form of urban agriculture is increasingly coming under threat by the planned expansion of the international airport nearby and high population pressure. Horticulturalists report the loss of gardens caused by the sprawl of unplanned settlements. For example, Adjahui, with its more than 60,000 inhabitants, is situated on public airport land, on a peninsula opposite to the shore of Soweto Remblais. It accommodates many house owners who had to make room for immeubles as well as tenants, who could no longer afford the increased rental cost in Soweto Remblais.

The local water table in Adjahui is high given the proximity of the lagoon, and soils are not well suited for construction. House owners and construction companies first erect a low stone wall on the border of the building plot. Then they stabilise the ground by applying rubble, waste and sand (see right Photo). This individual and incremental form of land reclamation has been practised for many decades, as the example of Soweto Remblais itself illustrates. It is especially widespread in swampland and along the lagoon shores. Some people even make use of the tides. While low waters  in the lagoon allow construction work, the same sites are submerged in water at high tide. Incrementally, the plot and surrounding areas are fully reclaimed, and water spaces eventually turn into land.

The third form of land reclamation is professional large-scale sand mining from the lagoon with boats. Here, sand pumping from the lagoon is usually  granted permission at ministerial level, without the involvement of municipal authorities and riverine communities. 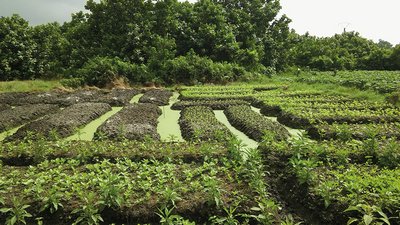 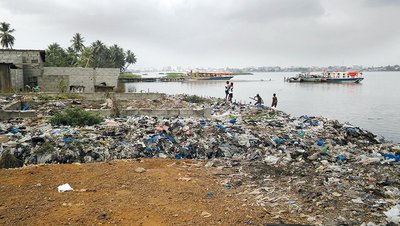 In this manner, the local response to the housing crisis for low-income groups quickly contributes to the almost irreversible destruction of the natural lagoonal landscape with its countless habitats and precious carbon sinks. The informal estate market solution to this shortage and new constructions along shores create temporary housing solutions that bear new vulnerabilities for their poor inhabitants, while offering the middle classes illegal but lucrative investment opportunities.

Just like other African coastal cities, Abidjan will need to take political decisions on how to meet present challenges, as they could accelerate in the future. Urban poverty and increasing socio-economic inequalities, the prevention of social unrest, the expansion of city transport, the securitisation of food provision and environmental health, the mitigation of water-related hazards and the adaptation to climate change – all these challenges demand effective and well-thought solutions. The inner city lagoon with its shores and swampy grounds nearby is already part of these solutions given its manifold ecosystem services. Local fisheries, water transport and the regulation of temperature within the city are just some examples.

However, protecting lagoonal ecosystems and fully using their potential for future solutions is being undermined by short-sighted, large-scale sand-mining and land reclamation. As soon as these water spaces have been transformed into land, they are lost. Once a public space has been privatised or fully occupied by strong private interest groups, it gets very difficult for public authorities to remain in control and use these spaces for developing sustainable solutions and for civil society actors to claim these spaces back for public use.

Irit Eguavoen works at the German Development Institute/ Deutsches Institut für Entwicklungspolitik (DIE) in Bonn, Germany, and the Geography Department of the University of Bonn, focusing on ocean governance and urban political ecology.
Contact: irit.eguavoen(at)die-gdi.de
Research in Abidjan was funded by the German Research Foundation (DFG EG 381/1-1) and the Fritz Thyssen Foundation (10.20.2.003 EL).

Eguavoen, Irit 2021. Reclamation and expulsion. Frontiers of city expansion and the loss of public and communal spaces at Abidjan’s lagoonal waterfronts. Urban Forum