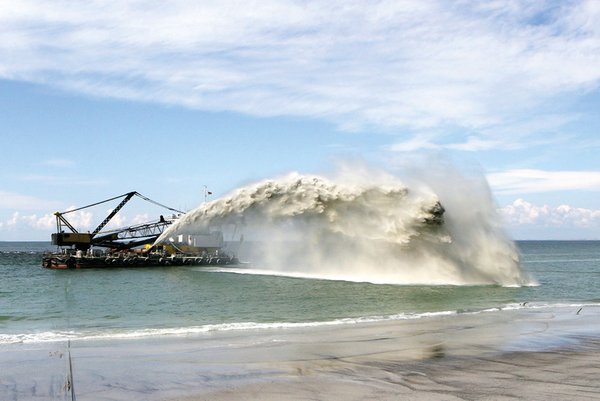 Suction dredgers bring the sand from depths of up to 100 metres to the shore.
Photo: Aleksandr Lesik – stock.adobe.com

Sucking away the sand

According to the United Nations, global demand for sand stands at a staggering 40 to 50 billion tonnes a year, the chief consumer being the construction industry. This article looks at why sand for building isn’t nearly as abundant as might seem and at the pressure which sand mining in general and coastal sand mining in particular are putting both on the environment, people’s livelihoods and food security, and it points to possible alternatives.

The Earth’s deserts contain huge expanses of sand. And yet desert countries like Dubai have to import vast quantities of sand to pursue their ambitious urban development projects. The reason for this is that wind-swept desert sand is usually too fine and smooth to perform the essential role which sand has in making concrete, that of binding the water and cement to create a paste which then hardens.

Water-swept sand, occurring in rivers, forming the beaches along coastlines and accounting for much of the seabed itself, tends to be much grittier, consisting of larger, rough-surfaced grains. As the need for sand increases, more and more of it is mined in river courses, along coasts, and even in the sea itself.

Sand is used in a wide range of electric and electronic appliances and equipment, including television screens, smartphones and solar panels. But urbanisation is the chief driver of sand mining. Today, around four billion people live in towns. The urban population is set to increase by a further 2.5 billion over the next three decades. The UN estimates that the world’s present 31 cities with more than ten million inhabitants, also known as megacities, will be joined by a further nine by 2030. China and India are the countries with the world’s largest construction sectors. From 2013 to 2015, China used as much concrete as the USA had throughout the entire twentieth century, and it accounts for roughly half of the world’s overall concrete production. But India is hard on its heels.

While Indian Prime Minister Narendra Modi’s ambitious goal of providing “Housing for all by 2022” may have run into financial difficulties, every day, huge convoys are still carting lorryloads of sand from pits and riverine mining sites to new settlements mushrooming around the country’s burgeoning cities. Such extensive activities are taking a heavy toll on the environment, also with regard to sinking water tables. But the frenzy of building and its greed for sand also has profound social impacts.

“We are spending our sand ‘budget’ faster than we can produce it responsibly. By improving the governance of global sand resources, we can better manage this critical resource sustainably and truly demonstrate that infrastructure and nature can go hand in hand,” said Joyce Msuya, Acting Executive Director of the UN Environment Programme at the launch of its report “Sand and sustainability: Finding new solutions for environmental governance of global sand resources” in 2019. UNEP says that riverine sand extraction, together with damming, has “reduced sediment delivery from rivers to many coastal areas leading to reduced deposits in river deltas and accelerated beach erosion”.

With demand far outstripping supply, sand mining has long reached the coasts, jeopardising the livelihoods of countless artisanal fishers and, given the importance of coastal fisheries, threatening food security as well. The most damaging way to extract sand in marine environments is to simply dredge it from the seabed. This is done largely with suction dredgers – stationary dredgers equipped with piping which can bring the sand from depths of up to 100 metres via a pontoon supporting the pump to the shore. Of course the dredgers don’t just scoop up the sand. Everything living in it is taken away as well. The rapid depletion of sand in coastal areas has been highlighted by the construction of the Burj Khalifa, the world’s tallest building, in Dubai. Sand for its construction had to be imported from Australia because the seabed around the United Arab Emirates has been virtually sucked barren.

In addition to the removal of the seabed sand, which represents a habitat in its own right, coastal sand mining has a wide range of other environmental impacts. It does of course contribute to coastal erosion in general. In Karnataka, in India, for example, the government has had to invest in new barriers to prevent coastal erosion as a result of sand mining. Sand extraction can also destroy beaches, dunes and sandbanks which act as flood barriers. It has even been maintained that the devastating 2005 tsunami could have had a lesser impact if much of nature’s own system of flood barriers had not been destroyed through sand mining by that time.

Rivers and estuaries deepened by mining activities can subsequently become wider, and mining can encourage salt water to enter surrounding terrestrial areas, a process which is compounded by sea-level rise. Turbidity is a further problem. Mining activities cause minute dust particles to be suspended in the seawater, creating a barrier which prevents sunlight from entering habitats and causing corals to perish. Fish and other organisms lack food and oxygen in such a disturbed environment.

UNEP also points to a “growing trend of unsustainable and illegal extraction in marine, coastal and freshwater ecosystems” which represents “a sustainability challenge with a display of the various extraction impacts on terrestrial, riverine and marine environments”. In fact, only around a third of all sand traded worldwide has been mined legally. Especially in India, organised crime syndicates are heavily involved in sand theft, with menial tasks being performed by people desperately seeking income. Moreover, robbed of their livelihood base, many former fishers themselves resort to illegal sand mining.

No, there are alternatives to sand mining in rivers and the sea. The infamous Trump Towers in Pune, India’s seventh most populous city, were constructed mainly with manufactured sand, m-sand for short, by Panchshil Realty, builders for former US President Donald Trump. M-sand is made by entering boulders and stones into a series of crushers until they are pulverised into sand grains, but also into dusty and flaky particles – ultrafine matter which has to be removed in a special washing process. All this requires a big energy input.

However cement, the second component of concrete, also consumes vast amounts of energy. In fact, cement is the third most energy-intensive material to produce after steel and aluminium. Energy is consumed in the electricity used in processing, in process heat and in transport. For every tonne of Portland cement, the type most commonly used, which is produced, reducing limestone to lime and carbon dioxide emits around a tonne of the latter into the atmosphere. This is one reason why supplementary cementing materials (SCMs) have already been used in concrete production for a number of decades. SCMs consist of recyclable industrial by-products which have been reclaimed. Not only are waste disposal volumes lowered in this manner, there is also less pressure on the natural resource of limestone. Into the bargain, concrete made with SCMs generally has a longer life. The chief SCMs used are fly ash and slag.

Only around a third of all sand traded worldwide has been mined legally.

Fly ash is emitted from coal-fired boilers, e.g. in power plants. In the USA, for instance, around 43 per cent of it is recycled. Slag is a by-product of smelting ores, but also of used metals, and consists of various metal compounds. It was already used as railway and road ballast in the nineteenth century, and today, one important area it is applied in is the manufacture of high-performance concrete for bridges.

SCMs are also used for high-performance concrete in India, and research has recently been conducted there on the role they play in reducing greenhouse gas emissions for this product. Further findings Indian scientists have come up with in this area include that adding SCMs to concrete mixtures lowers hydration heat and enhances the strength and durability of concrete structures.

Finally, plastic is also finding its way into the manufacture of concrete. Since plastic waste is increasingly threatening marine ecosystems and hence adding to the problems of coastal as well as high-sea fisheries, using more plastic waste as a source of materials to manufacture concrete could reduce pressure on fishers both as an alternative to sand mining and in terms of recycling plastic waste. One new approach in this area has emerged at Montana State University, in the USA.

Researchers at the university’s Norm Asbjornson College of Engineering have found that plastic can be added to concrete without weakening its structural strength if it is coated with certain bacteria. Otherwise, filling plastic into a concrete mixture disrupts the ability of the sand, water and cement to bind properly. The MSU scientists found that concrete with up to five per cent of bacteria-treated plastic had the same strength as traditionally mixed concrete. Given the energy-intensive production, even a five per cent addition of treated plastic could significantly reduce carbon dioxide emissions. Added to that, with concrete being used in such huge amounts, the new method would enable a considerable reuse of plastic.

To achieve the desired result, the researchers immersed the plastic in a solution containing a harmless bacterium, Sporosarcina pasteurii. The bacterium grows on the plastic surface, forming a biofilm. Calcium and urea are then added to the solution, causing the plastic to acquire a thin coating of calcite, which limestone is made of. The scientists have already used the coated plastic to seal tiny cracks deep underground in leaking oil and gas wells.

Mike Gardner is a free-lance journalist based in Bonn, Germany and is German, Swiss and Austrian Correspondent for University World News.
Contact: mike.gardner(at)zaehlwerk.net