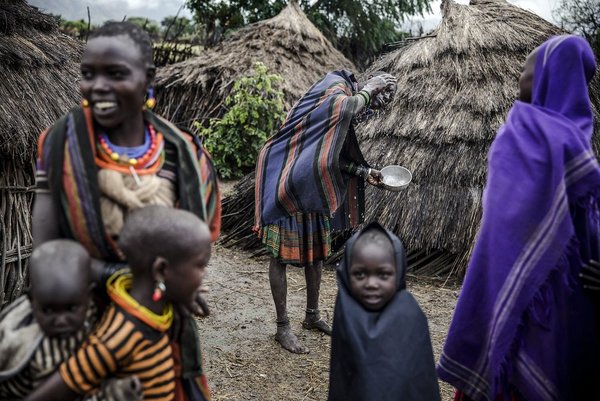 Village of Kochunoi, Uganda in the proximity of the Kenyan border, 2020. More information on rural livelihoods is needed to fight poverty.
Photo: © FAO/Luis Tato

The Rural Multidimensional Poverty Index can help as a guiding tool for policy makers, and as a monitoring tool for projects and programmes that seek to tackle rural poverty by providing more specific data on people’s livelihoods.

Information on the conditions in which people live is decisive if we are to identify and apply the right measures needed to reach the Sustainable Development Goals. The majority of the world’s poor live in rural areas, but reliable and harmonised information on their numbers and living conditions is difficult to come by.

To help meet this deficiency in the fight against global hunger, the Food and Agriculture Organization of the United Nations (FAO), in collaboration with the Oxford Poverty and Human Development Initiative (OPHI), presented the innovative Rural Multidimensional Poverty Index (R-MPI) in February 2022.

The R-MPI broadens existing methods for measuring rural poverty by taking a closer look at rural people’s capabilities: food security, the quality of their nutrition; their education, and living standards. Moreover, FAO and OPHI added two key aspects affecting the life of rural dwellers in particular: access to (or lack of) adequate agricultural assets and exposure to environmental and other risks and social protection.

The R-MPI builds on the notion that a single dimension, such as household income, does not accurately capture poverty in rural areas. It is now widely recognised that hardship means much more than an empty bank account.

That notion is reflected in the Global Multidimensional Poverty Index (MPI), which was launched in 2010 by the United Nations Development Programme and OPHI and covered 109 countries and 5.9 billion people in 2021.

The R-MPI, which expands the scope of the global MPI, also includes an innovative combination of geospatial and survey data that quantifies rural dwellers’ risks of exposure to drought, floods or heat waves.

The usefulness of this new tool is illustrated in a joint FAO-OPHI report, which tested the index using recent household surveys in Ethiopia, Malawi, the Niger and Nigeria.

The report shows how the R-MPI captures additional and different information compared to other measures – both monetary measures and multidimensional measures – that do not incorporate rural specificities. The dimensions included were proven to be efficient from a statistical standpoint. The overlap between monetary and non-monetary deprivations is significant. However, the R-MPI captures more. In Malawi, for instance, as many as 14 per cent of the rural poor identified by the R-MPI were not identified as poor by the monetary metric.

The R-MPI was also tested in the field, specifically in 64 rural areas of Malawi. Community members were asked to review the dimensions included in the R-MPI, based on their life experience, and define, in their own words, rural hardship and poverty. While most dimensions turned out to be considered crucial, others – such as state of mind or physical appearance – also surfaced. While not all of these can easily be elicited in large-scale surveys, important lessons were learned about the limitation of money metrics and the importance of tailoring the measurement to rural contexts.