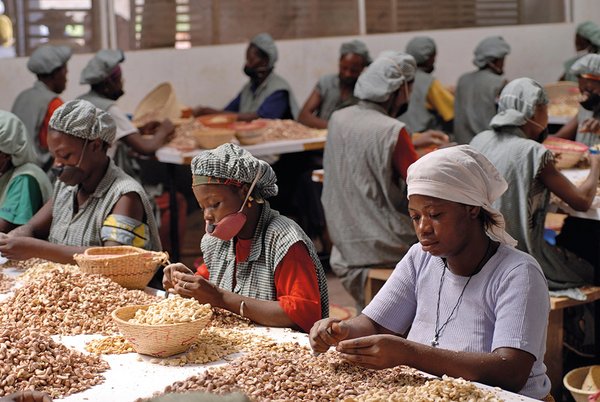 Horticultural exports – a threat or a boost to food security?

Many countries that have become important suppliers of horticulture produce to the world market – such as Kenya, Ethiopia, Peru and India – have high rates of poverty and food insecurity within their borders, and especially so in rural areas. So does this also mean that the exports have a negative impact on the population’s food situation? Our authors have taken a look at how these aspects relate to one another.

In the past two decades, exports of horticultural products (including fruits, vegetables and cut-flowers) from developing countries have increased sharply – as can be seen in the figure below. Exports from Latin America more than tripled in the past 20 years, and those from Africa and Asia more than quadrupled. Horticultural products have even become the most important agri-food export category for developing countries, with export earnings having surpassed those from traditional tropical commodities, such as tea, cocoa and coffee. Horticultural produce is mostly destined for high-income countries, where consumer demand for year-round availability of fresh products and for tropical fruits is increasing. 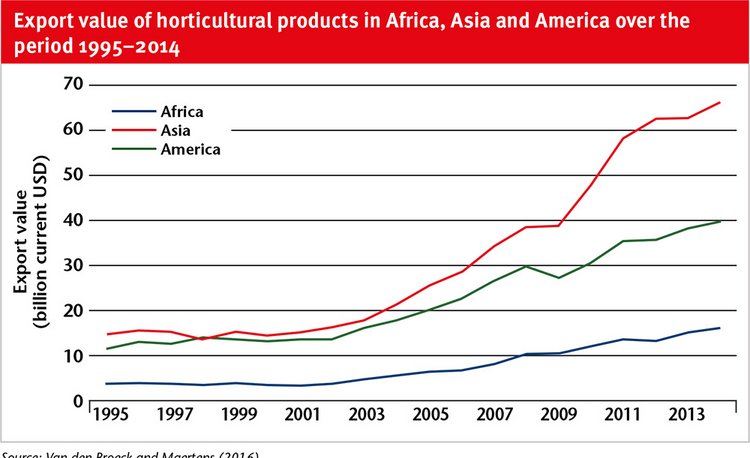 Indirect access to food may increase if contract farmers and employees in the horticultural sector benefit in terms of higher incomes and reduced poverty, and if income increases lead to increased purchasing power. Many studies have demonstrated beneficial income and poverty effects of contract farming in export chains. Some authors have shown that the adoption of private standards leads to additional benefits for smallholders (see also article on page 27). However, evidence of wage employment in export chains is more contentious. While some find large poverty-alleviating effects, others point to low wages and insecure employment contracts, and expect expansion of horticultural exports to lead to increased vulnerability of poor households. The different findings are likely to relate to the specific context. Case studies from African countries tend to be more positive than those from Latin-America, which is probably due to the more recent horticultural export boom and the lack of other rural employment opportunities in African countries. In addition, the newly created employment opportunities for women in export companies lead to a higher share of income controlled by women. This might improve households’ food access if women are more likely to spend money on food, and more nutritious food in particular, than men – as is observed e.g. in Kenya and Nepal. Yet, higher incomes do not automatically imply improved access to food. Food prices also importantly determine a households’ capacity to buy food. If prices rise at a higher rate than income, then households’ purchasing power decreases and their access to food is reduced. Horticultural exports may increase food prices if exports reduce domestic food production because of competition over resources, increase dependency on food imports at volatile prices, or create substantial environmental externalities. These effects adversely affect households’ access to food – even if incomes are increasing. On the other hand, horticultural export growth is often associated with investments in infrastructure in horticultural production zones. Such investments reduce transaction costs and better link (remote) rural areas to markets, which may result in higher farm incomes, reduced local food prices, a wider diversity of food brought into rural areas, and improved access to food. However, there are no studies that have investigated whether horticultural export growth creates upward or downward pressure on domestic food prices.

Direct access to food may decline if households re-allocate land, labour and capital from food production for their own consumption to horticultural production for the export market. Still, the shift from direct to indirect access is not necessarily bad for food security of rural households. If the increase in purchasing power from participation in export chains is large enough, the increase in indirect access to food will offset the reduction in direct access. This is likely to be the case for contract-farming, given the magnitude of estimated income effects, but less likely for wage employment, given that estimated income effects are lower and real wages may increase slower than food prices. 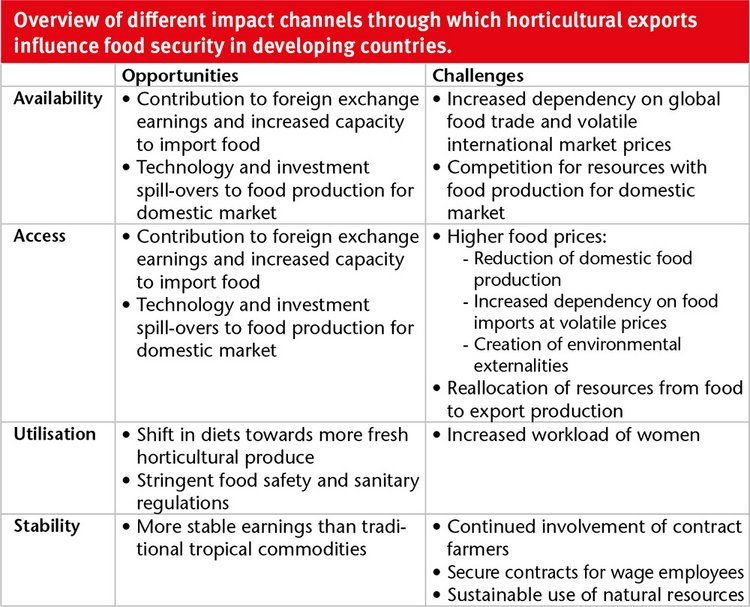 Food utilisation entails the appropriate use of food in order to absorb nutrients and relates to nutritional quality and safety and sanitation of consumption. The development of export sectors may stimulate domestic fruit and vegetable sectors and induce a shift in the diet of people towards more fresh horticultural produce. On the other hand, employment of women in horticultural sectors may negatively affect nutrition. As women are most often responsible for food preparation, their increased workload as wage employees may reduce the time spent on food preparation. This could lead to more convenient, ready-made and less nutritious food in households’ diets, but evidence is lacking here. In addition, horticultural sectors have to comply with stringent food safety and (phyto-) sanitary regulations and, increasingly, with even more stringent private standards. Good agricultural and (phyto-) sanitary practices in export sectors may influence practices in domestic food sectors and improve safety and sanitary conditions of food production and distribution. Contract farmers who apply good agricultural practices on their contracted fields for export production may use these practices also on fields they cultivate for domestic production. For example, the use of GlobalGAP standards among Kenyan vegetable farmers has been demonstrated to lead to less hazardous pesticide use. Similarly, (female) workers in export companies who have to comply with sanitary practices at the workplace may use these practices at home, resulting in improved sanitary conditions of food preparation.

Food stability entails sustained food availability and access, and relates to food resilience and environmental sustainability. Horticultural export growth may influence stability in four ways. First, horticultural export earnings contribute to the long-term capacity of countries to import food. These earnings make countries less vulnerable to price shocks than earnings from traditional tropical commodities because prices are more stable, and produce variety is larger and includes annual crops that allow a faster reaction to shocks compared to perennial crops. In addition, horticultural chains are characterised by direct, personal and long-term commercial relations between exporters and overseas buyers, which leads to more stability in exports.

Second, the stability of farmers’ and workers’ participation in horticultural export chains – and how this is guaranteed in contractual agreements – matters as this determines their purchasing power and long-term access to food. There is doubt on the continued and stable involvement of smallholder contract-farmers in export chains, as companies increasingly produce on their own fields and exclude smallholders from the supply chain. For workers in export sectors, permanent and secure employment contracts are often lacking. Ensuring minimum wages and decent employment conditions in horticultural export sectors remains a point of attention in national legislation in many countries.

Third, future food production of countries and communities depends on the continued availability of natural resources. Hence, the sustainability of resources exploitation in horticultural sectors matters for stability in food security. Agricultural export production in general and large export companies in particular are often blamed for overexploitation of water and soil nutrient resources, and for soil and environmental pollution through overuse of chemical fertiliser and pesticides. While the existing evidence largely refutes the concerns related to fertiliser and pesticide use and soil nutrient overexploitation, the evidence on water overexploitation is more mixed. Studies have expressed concerns about overexploitation of water for horticultural export production in particular water-scarce production zones, e.g. in Peru and Kenya.

In conclusion, there is very little evidence on the impact of horticultural export growth on food security. The discussion on the various impact pathways shows that horticultural exports do not necessarily jeopardise food security and may actually contribute to improved availability, access, and utilisation of food. Especially the development of rural labour markets and participation of women in wage employment in horticultural companies may lead to improved food security. Yet, for stability in food security, important challenges remain, such as the provision of secure employment at remunerative conditions by export companies and the sustainable use of water resources.