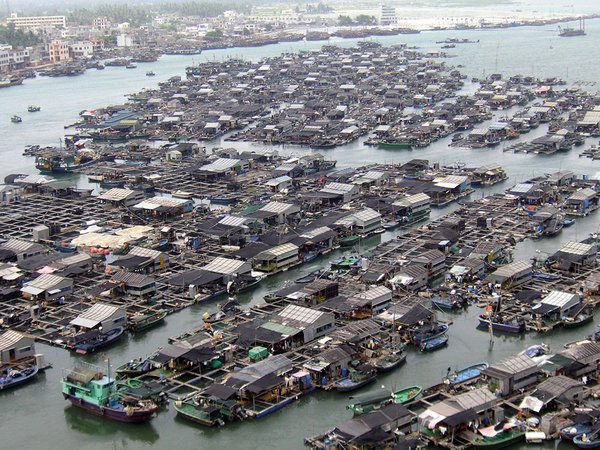 Living on the coast in Hainan, China.
Photo: Lucia Herbeck

The land and the sea are interconnected. Changes originating on land impact on the health of the seas, whose condition in turn bears on terrestrial ecosystems and on human well-being. Increasing anthropogenic activities in coasts – where land and sea interface – are intensifying these interdependencies. But the dominant governance approach, which separates responsibilities for land and sea, fails to account for land-sea interactions as an important frontier for advancing sustainability.

The coast has always been a dynamic area. Over centuries, many coastal areas have historically evolved from being fishing towns to large, modern cities providing a home to growing populations. Yet what makes contemporary coastal spaces a particularly important area for governing for sustainability is the diverse and intensified changes in resource use that are causing significant impacts on biodiversity and human well-being at previously unprecedented scales. Accelerated anthropogenic use of coastal spaces is being enabled by increased technological abilities and economic investments which create large-scale ecological and social impacts. Examples of such activities include coastal sand mining, increased shipping, deep sea fishing, intensive aquaculture, energy production, tourism and real estate development. These are associated with ecosystem disruptions such as habitat loss, biodiversity decline, the introduction of invasive species and aquatic pollution in its various forms.

Coastal communities are adversely impacted when natural ecosystems which deliver ecosystem services for livelihoods and daily activities are degraded, and when their access to coastal resources is curtailed in favour of large-scale development by rich and powerful actors such as corporations and industries. The ecological and social impacts of intensified coastal resource use, and in consequence, land-sea interactions, have an important bearing on the Sustainable Development Goals (SDGs).

These issues are particularly urgent in low- to middle-income countries of the tropics and subtropics where poor and vulnerable communities tend to cluster in coastal areas. These areas are more heavily impacted by climate change. They go through more rapid processes of social, economic and ecological changes coupled with low levels of public investment and weaker institutional capacities to govern. The ability of the poor to be food secure, nourished, and free from poverty depends on sustainable land-sea interactions. Governing this space appropriately is a necessary prerequisite for sustainable development.

However, the broad scope of changes and challenges in the land-sea interface starkly contrasts with the wide lack of suitable integrated governance structures and processes. Land and sea remain separately governed, and work by government, non-government organisations, and scientists often remain sectoral. Governance for land-sea interactions is therefore urgently required. Such governance mechanisms need to be explicitly oriented towards sustainability – that is, the conservation of diverse coastal and sea ecosystems, biodiversity and the realisation of human well-being for all, particularly the poorest and most vulnerable.

There is a long history and a long list of governance challenges in coastal areas. The coast is a contested area that serves multiple functions. For instance, seas and oceans are transport routes, and it is owing to this function that piracy has been a long-standing issue. The coast is also the primary site for fisheries, which is vital for food production and livelihoods. But, as mentioned earlier, different uses of the coastal zone have multiplied over time, and the intensity of use has increased (see Figure). This is true for many sectors. 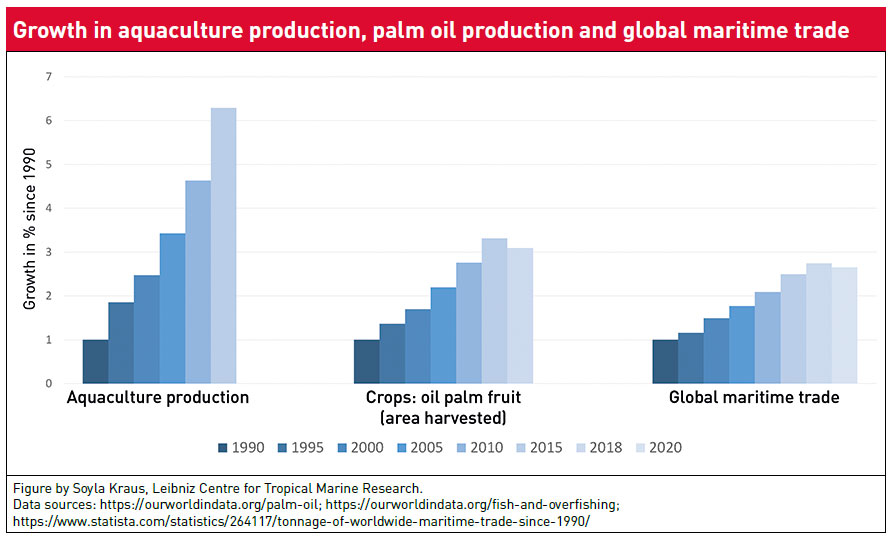 Fisheries production has been inadequate to meet rising demands but aquaculture took over and now produces more than 50 per cent of human-consumed fish. This is accompanied by an increased nutrient load in coastal waters (becoming increasingly apparent for major aquaculture producers like China, Indonesia or Vietnam), growing demand for fish feed, which elevates pressure on wild catch in the main producing regions such as the Pacific Coast of Latin America and West Africa, more demand for coastal space and some knock-on effects on biodiversity, food security and human nutrition. Beach tourism has increased competition on beachfront land in coastal places around the tropical belt such as Costa Rica, Zanzibar and Thailand. Asymmetries in purchasing and political powers have enabled coastal grabbing.

Such developments are accompanied by increased freshwater consumption, which often leads to saltwater intrusion and sewage water disposal. Additionally, the presence of tourists increases the demand for and price of food, which can impact on the affordability of food for local residents. The range of impacts is systemic.

Mining for sand, particularly illegal mining, as famously reported for India, Indonesia and Ghana, has especially increased in coastal areas and connected rivers. Not only does it negatively affect river flows, agriculture, soil, and coastal protection, it is often also harmful for particularly vulnerable parts of society which are openly exposed to illegal activities. Farther out at sea, offshore energy, oil and gas extraction as well as other mining activities, pushed by blue growth initiatives, bring people, traffic, waste, money and competition for valuable resources to the coast.

This acceleration on the coastal side is matched by the acceleration of activities in the hinterland. Examples include the conversion of rainforest into palm oil plantations, which leads to the release of more carbon dioxide into the atmosphere as well as nutrients and sediments flowing to rivers and eventually to the sea. Agriculture intensifies, causing less water discharge to estuaries and the transport of more pollutants. Societies have also increased the use of plastics, resulting in the well-known marine garbage patches, including the great garbage patch in the Indian ocean, as rivers and the rainy season flush plastics out to sea. Globally, the largest contributors of mismanaged plastic waste which could enter the ocean are China, Indonesia, the Philippines, Vietnam and Sri Lanka. Moreover, the shipping of recyclable waste, particularly to the so-called Global South, exacerbates problems in the management and proper disposal of plastic waste.

Why land-sea interactions should be seen as social-ecological systems

In several studies, coastal areas, in which land and sea interface, have been conceptualised as social-ecological systems (SES). This concept has been widely used in sustainability science to investigate the interlinked dynamics of environmental and societal changes. Conceptualising land-sea interactions as social-ecological systems enables a systemic and holistic perspective that can capture both ecological and social dimensions and straddle land and sea divisions to foreground connectivities, feedbacks, and relationships. However, while having started to emerge in research, existing governance arrangements have not reflected this development in thinking.

One concrete example which highlights land-sea interactions and the need to conceptualise them as social-ecological systems can be found in the province of Bulacan, in the north of the Philippines. In 2020, the Philippine government approved a franchise for the construction of the New Manila International Airport, which will be constructed by the San Miguel Corporation. The infrastructure is expected to cover a coastal area of approximately 2,500 hectares, presently a home to fishing and fish farming communities, and coastal biodiversity. Opposition has mounted particularly from environmental groups, conservation advocates, small-scale fishers and fish farmers as well as religious groups given the impending loss of biodiversity and local livelihoods, the increased disaster risks and the fragmentation of local communities.

However, land-sea interactions which underpin the social-ecological impacts of intensive and large-scale coastal infrastructure development extend beyond the governance scope of existing institutional structures. Despite coastal biodiversity and associated livelihoods being directly at stake, the Philippines’ Bureau of Fisheries and Aquatic Resources (BFAR), which is responsible for the conservation and management of coastal and aquatic resources, has not played a significant role in dealing with the issues emanating from the aviation and construction industries.

Social factors underpin how social-ecological changes in the coasts impact on people. First, social inequalities mean that gains and losses from different anthropogenic activities in the land-sea interface tend to be distributed unevenly. In the example given of airport construction in Bulacan, fishing and fish farming communities have much less political power compared to government officials and investors, and much to lose given their precarious livelihoods. Such uneven distribution of impacts is structurally generated through the policies and institutions that govern the utilisation of coastal space. Lack of political will and the ineffectiveness of existing institutions to ensure the rights of those who are dispossessed of home and livelihood also play a role.

Second, in the context of land-sea interactions, questions of how gains and losses are distributed and to whom they flow are central to achieving sustainable outcomes. In the Philippine example, social costs in the form of diminished access to resources on which medium enterprises or smallholder livelihoods depend and people’s reduced capacities to secure their well-being impact the poorest, while high economic gains accrue to the rich actors. Here, the poorest and most vulnerable are becoming excluded from accessing resources, and their livelihoods are compromised. These small-scale fishers and fish farmers often have fewer assets that are needed to cope with the disruption in their lives and have less capacities to transition to other livelihoods. Thus, dynamic changes in the land-sea interface can exacerbate the struggle of coastal populations to secure a good quality of life.

As shown above, multiple activities at the land-sea interface with many consequences for people are rising. Such activities are not only producing externalities which could be regulated by tools such as taxes and property rights, they are interdependent. This means that the degree of relationship is constantly changing in a non-linear manner, potentially with non-reversible tipping points.

While different activities are regulated in silos, interdependencies between land and sea require an intelligent mix of manageable, feasible, and potentially complex webs of governance structures. These might include conventional but enforced and encompassing regulations, deliberation and participation, or new, innovative and adaptive property rights, ranging from private to state, or new forms of common ownership. Establishing these for highly heterogeneous activities and players as existing on the coast is a challenge for collective action.

System size and complexity of interdependencies are often immense in land-sea interaction. For example, land-based activities in Tanzania might have devastating consequences via the Nile on livelihoods in Egypt, or even in other countries bordering the Mediterranean Sea. This indicates that governing the coast requires complex, multi-scale governance regimes, leading from the very local to the national, regional and global levels. Understanding these challenges is still in its infancy.

Patterns of resource use in many coastal areas in different parts of the world are being reshaped. The effects of such changes influence our collective ability as a society to achieve the Sustainable Development Goals. A social-ecological reframing of land-sea interactions and the building of suitable governance structures and processes that embody a social-ecological systems perspective will be a challenge to realise – but one that is urgently needed.

The Abidjan Convention
The Abidjan Convention, or the Convention for Cooperation in the Protection, Management and Development of the Marine and Coastal Environment of the Atlantic Coast of  the West, Central and Southern Africa Region, was first signed in Abidjan, Côte d’Ivoire on the 23rd March 1981 and went into force on the 5th August 1984. It covers a marine area from Mauritania to South Africa (altogether 22 countries). As a legal framework for all marine-related programmes in West, Central and Southern Africa, it regulates marine pollution from ships, dumping, land-based activities, exploration and exploitation of the seabed, as well as ecosystem-based management of meadows,
wetlands, barriers and lagoons.

Aisa O. Manlosa is a postdoctoral researcher within the project Food4Future. She is a member of the working group Institutional and Behavioral Economics, Social Sciences Department at the Leibniz Centre for Tropical Marine Research (ZMT), based in Bremen, Germany.

Achim Schlüter leads the working group of Institutional and Behavioral Economics and heads the Social Science Department at the Leibniz Centre for Tropical Marine Research. He is Professor of Social Systems and Ecological Economics at Jacobs University, Bremen.

Anna-Katharina Hornidge is the Director of the German Development Institute/ Deutsches Institut für Entwicklungspolitik (DIE) and Professor of Global Sustainable Development at the University of Bonn, Germany.