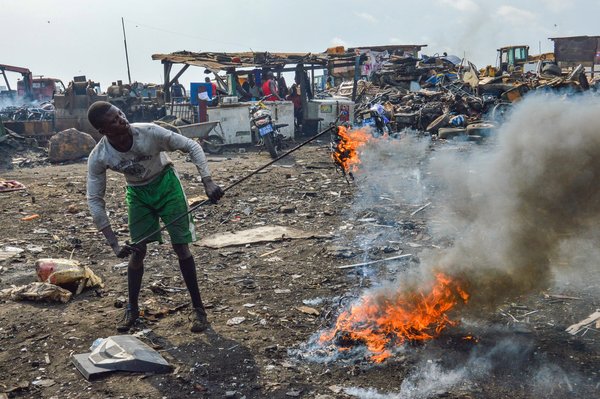 High levels of some of the most hazardous chemicals on Earth have been found in eggs in Agbogbloshie, Ghana. The contamination results primarily from the breaking apart of discarded electronics (e-waste) and burning plastics to recover metals.

Researchers analysed the eggs of free-range chickens that forage in the Agbogbloshie slum in Ghana, home to an estimated 80,000 people who subsist primarily by retrieving and selling copper cable and other metals from e-waste. Their findings were published in the report Weak Controls: European E-waste Poisons Africa’s Food Chain.

The process of smashing and burning the plastic casing and cables to extract the metals releases dangerous chemicals found within the plastics, such as brominated flame retardants, and creates highly toxic by-product chemicals like brominated and chlorinated dioxins and furans. The sampling of eggs revealed alarmingly high levels of some of the most hazardous and banned chemicals in the world, including dioxins, brominated dioxins, PCBs (chlorinated diphenyls), PBDE (Polybromierte Diphenylether) and SCCPs (short-chain chlorinated paraffins). PCBs in these eggs were four-fold higher than the EU standard and 171-fold more elevated than the standard for dioxins and dioxin-like PCBs.

An adult eating just one egg from a free-range chicken foraging in the Agbogbloshie scrap yard and slum would exceed the European Food Safety Authority (EFSA) tolerable daily intake (TDI) for chlorinated dioxins by 220-fold. The typical daily egg consumption per person in Ghana is less than one egg a day, but even eating 2.5 grams of an egg per day would exceed the EFSA TDI by more than 15-times.

Researchers from BAN have tracked shipments of used electronic devices from Europe to Ghana. The 2018 BAN report Holes in the Circular Economy: WEEE leakage from Europe revealed how e-waste from homes and businesses in Europe were fitted with electronic trackers and traced to developing countries. In Africa, the European e-waste was illegally dumped in Ghana along with locations in Nigeria and Tanzania.

The export of e-waste and the toxic chemicals they contain could be prevented by agreement on tougher hazardous waste limits in the Stockholm Convention, known as Low POPs Content Levels (LPCL). POPs (persistent organic pollutants) waste, as defined by the LPCL, cannot be exported to countries that do not have the advanced infrastructure to destroy it.

Holes in the Circular Economy: WEEE leakage from Europe:
http://wiki.ban.org/File:Holes_in_the_Circular_Economy-_WEEE_Leakage_from_Europe.pdf