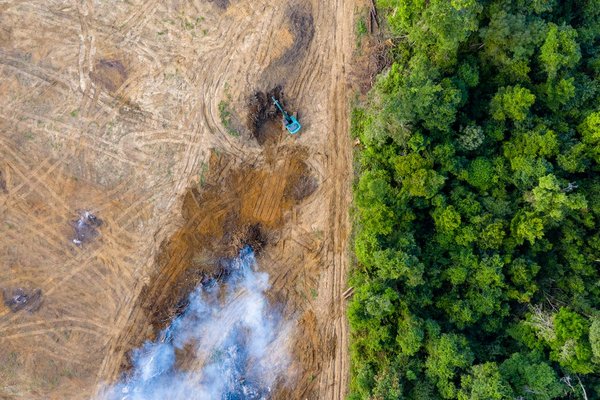 Increasing the forest area in the Global North cannot compensate for the deforestation carried out to obtain agricultural land, and agricultural trade is causing dramatic biodiversity losses. This applies, for example, to trade in coffee and cocoa, while global grain trading is comparatively positive.

The environmental costs of trade - especially in coffee, tea, soy and beef - remain high, according to the authors of a review of the environmental impacts of global food trade published in the journal One Earth in November 2021.

In the past three decades, trade in food has more than doubled and now accounts for almost one quarter of global food production. 80 per cent of the world’s population live in countries that are net importers of food.

Driver of deforestation and biodiversity losses

But while agricultural trade is important for the food supply of countless people, it is also a major driver of deforestation and of the loss of natural habitats and biodiversity. In this regard, the assembled studies show a clear link between growth in agricultural trade and deforestation, along with the associated impacts on local ecosystems and biodiversity. The export of soybeans, palm oil, and beef from a handful of countries in Latin America and Southeast Asia destroys hundreds of thousands hectares of forest – every single year.

“In the European Union, emissions due to tropical deforestation account for 13 to 30 percent of the total carbon footprint of an average daily diet. In short, we are “eating” the forests!” says Thomas Kastner of the Senckenberg Biodiversity and Climate Research Centre, Frankfurt/M, lead author of the study.

The increase in forest areas in many countries of the Global North does not compensate for this, and is often only possible because the deforestation is “exported”, in a manner of speaking.

Biodiversity also suffers from agricultural trade. For example, studies show that international trade is the main driver behind the at-risk status of about 30 percent of all endangered species. The greatest threat to biodiversity is posed by oilseeds such as palm oil and soy, but also coffee, cocoa, and beef.

According to Kastner, this must also be seen as a political problem. “Many poorer countries are expanding their agricultural areas primarily for exports. While this strengthens their economies in the short term, it makes them dependent on trade – and at the same time vulnerable to economic crises.” Conversely, dependence on food imports can also be problematic, especially with increasing climate change.

Kastner cites an illuminating example: studies covering the heatwave from 2008 to 2010 showed that it led to massive crop failures in Russia. Russia subsequently curtailed its exports, leading to shortages in the Middle East, which further studies have linked to protests and the Arab Spring.

The study also highlights that global trading in grains is comparatively efficient – in contrast with the far-reaching impacts of trade in coffee and cocoa, for example.  Grain trade supplies a large number of people with important calories and consumes fewer resources in the exporting countries than would local production aimed at self-sufficiency with current cultivation methods.