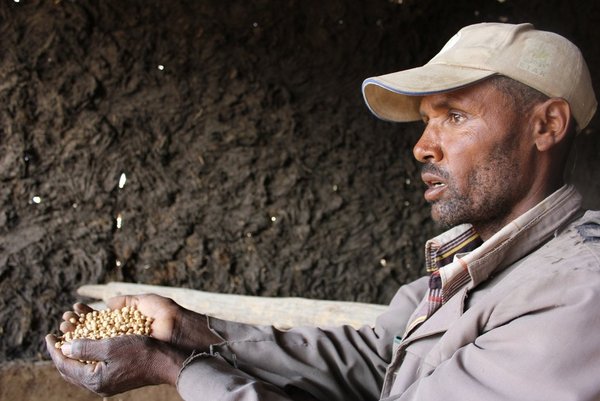 A seed producer from central Ethiopia in his granary with a new variety of chickpea seeds.
Photo: © ICRISAT

Chickpea yield in Ethiopia could be doubled

By enhancing Ethiopian farmers’ technical knowledge, chickpea yields in Ethiopia could be significantly increased, according to a recent study by the International Crops Research Institute for the Semi-Arid Tropics (ICRISAT). The study identified three potential gaps – the size of allocated land, inappropriate usage of nitrogen-phosphorus-sulphur fertiliser and increased use of pesticides.

A study led by researchers from ICRISAT has revealed that chickpea yields in Ethiopia could be potentially doubled by enhancing the technical efficiency of its production and technology use.

The study, published in Springer Nature’s Food Security journal, was conducted in three regions of Ethiopia – Amhara, Oromia and Southern Nations, Nationalities and People's Region (SNNP). These are among the major chickpea-growing areas in the country.

As part of this study, led by Dr Shalander Kumar, an agricultural economist at ICRISAT, researchers studied 681 chickpea-growing farm households. Using a meta frontier model (a calculation method applied to estimate technical knowledge of different technologies), they analysed the technical knowledge of the farmers to attain potential crop production per unit of inputs in the identified regions.

Although Ethiopia has witnessed significant improvement in chickpea production and area planted in the past two decades, data analysed by the researchers shows that the grain yields significantly vary within and across the three study regions.

The study revealed that farmers in the three study regions employ different types and levels of technology for chickpea production. Researchers identified three potential gaps – the size of allocated land, inappropriate usage of nitrogen-phosphorus-sulphur fertiliser and increased use of pesticides – that influence the production of chickpea in Ethiopia.

“Relatively larger chickpea farms performed better, most likely benefiting from the specialisation and economies of scale. In other words, if farmers allocate suboptimal land sizes to chickpea on their farms, their production performance decreases,” the study states.

Ethiopia is the largest chickpea producer in Africa

Ethiopia is the sixth-largest producer of chickpea globally and the largest in Africa. Chickpea is Ethiopia’s third most important export legume after faba bean and haricot bean, generating a revenue of about USD 61 million annually, and making chickpea one of the main pulse crops in the country in terms of cropped area, total production and direct human consumption.

Analysis of chickpea production in the three regions has revealed that if farmers overcome some of the practical limitations in accessing knowledge-based interventions and capital and adapt to biophysical constraints, this may increase the average technical efficiency of chickpea production from the current level of 0.53 to 0.75 if not 1. It implies that the farmers could increase chickpea output by about 53 per cent.

“Thus, chickpea production in Ethiopia could be increased from its current level of about 500,000 tons to about 750,000 tons by improving technical efficiency while narrowing the yield gaps,” the study reads.

The ICRISAT study indicates that enhancing farmers’ awareness through participatory extension programmes may further increase chickpea productivity and production in Ethiopia. In addition, strengthening the capacity of women chickpea producers is likely to result in significant gains in production efficiency and yield levels.

Researchers pointed out policy implications such as realignment of gender priorities at the farm level, access to labour/farm machinery, policy support for enhanced small-scale mechanisation and availability of knowledge to farmers that can potentially enhance chickpea production and narrow yield gaps.