“Diversity instead of uniformity” plays a key role in the concept of agroecology. It includes bidding farewell to large-scale mono-cropping and a greater variety of seeds for farmers to choose from.
Photo: Martin Leissl/laif

Agroecology – the most convincing proposal for transforming unsustainable agro-food systems

“Agroecology” is becoming increasingly important in the debate on the future of agriculture and the food industry. Is it just a new buzzword, one of so many on the long list of sustainable agriculture terms, or is it really a novel approach that calls for changing tack? Our authors explain.

The current industrial agro-food system, including the many aspects of production and distribution, is highly unsustainable, both for environmental and for human health reasons. Furthermore, it fails to feed the world as was promised decades ago. This was concluded in the 2008 International Assessment of Agricultural Knowledge, Science and Technology for Development (IAASTD) Report and captured in the statement that “business as usual is not an option anymore” (see also article "IAASTD: From words to action"). The situation was described even more dramatically in the 2013 Review by the United Nations Conference on Trade and Development (UNCTAD), titled “Wake up before it is too late to make agriculture truly sustainable for food security in a changing climate”. But hunger and starvation continue to rise despite the fact that more than enough foodstuff is available and global productivity of most staple crops is still increasing.

Moreover, for many years, scientists have been sounding the alarm that the global ecosystem is in a precarious state and possibly on the verge of an abrupt shift because of anthropogenic pressures. For example, Johan Rockström and his colleagues write: “Further pressure on the earth system could destabilize critical biophysical systems and trigger abrupt or irreversible environmental changes that would be deleterious or even catastrophic for human well-being”, which may leave planet Earth in a “much less hospitable state” for human populations, as Will Steffen and colleagues maintain. Together with other scientists, they have identified nine key global ecosystem processes that regulate the stability and resilience of the global ecosystem. For each process, they have defined the boundaries of the safe operation space for humans. They show that for four of these nine processes, the planetary boundaries have been exceeded as a result of human activity: climate change, loss of biosphere integrity (i.e. biodiversity), land-system change, and altered biogeochemical cycles (phosphorus and nitrogen).

One of the main drivers behind the anthropogenic pressures on these planetary processes is industrialised agriculture. This form of agriculture has been modelled after the extractive industries, reducing agriculture to one function only: the production of raw materials (commodities) for long industrial extraction and production chains for feed, fibre, energy and foodstuff. In this model, maize or soybeans, for example, are no different from oil or minerals mined from beneath the soil. Also in so-called less developed countries with as yet little industrialised agriculture, powerful forces are at work pressuring national governments into converting land to such industrial monocultures, at the expense of small-scale farmers, human health and the environment. The products of these long, open and linear industrial processing chains may be edible foods, although this is not what these commodity crops are mainly meant for. Many of them serve as raw materials for feed, fibre and, increasingly, fuel. Emily Cassidy and colleagues calculated that, gobally, only about 59 per cent of the total produced calories are delivered to the world’s food system. However, the more than 80 per cent of crop produced calories going into human food in development countries contrasts sharply with the 34 per cent in the USA. The rest ‘feeds’ engines, industries and waste disposal sites. Cassidy and colleagues found that if the current mix of crops were grown exclusively for direct human consumption, in principle, it could feed an additional four billion people today – instead, more than 800 million are starving.

Just like all commodities, these commodity crops are globally traded and transported. In basically all industrial countries (as well as those striving to become such countries), policies and subsidiary systems have been installed that reward those farmers who consolidate their farms as larger units and firms to produce the highest quantities possible of primary raw materials from a handful of crops, like soy beans, maize, oilseed rape, wheat or cotton. These industrial agro-food systems rely on external inputs such as fossil fuel, synthetic pesticides and fertilisers to support the large-scale production of these few commodity crops bred primarily, if not exclusively, for yields. In the breeding programmes of the high yield varieties used in these industrial systems, little consideration was given to adaptation to local conditions and resistance against pests and diseases.

The concept of agroecology

Agroecology is inspiring more and more people as a concept for the transformation of current unsustainable agro-food systems into sustainable ones. In 1983, Miguel Altieri defined it as the application of ecological principles to agriculture, and it fundamentally includes farmers and builds on farmers’ knowledge. He proposed that agroecological systems should be based on five ecological principles: 1) recycling biomass and balancing nutrient flows and availability; 2) securing favourable soil conditions for plant growth by enhancing the organic matter; 3) minimising losses of solar radiation, water and nutrients by managing the microclimate and soil cover, and practising water harvesting; 4) enhancing biological and genetic diversification on cropland; and 5) enhancing beneficial biological interactions and minimising the use of pesticides.

For others, agroecology is not only a system of producing food or a scientific discipline, but also a social movement that links producers to consumers and criticises the effects of industrialisation and the economic framework of the globalised food market. Michel Pimbert states that agroecology is based on autonomy, prudent use of resources and co-operation along the entire agro-food chain. Agroecology is, thus, neither a defined production system nor a production technique. It is rather a set of principles and practices intended to enhance the sustainability of a farming system tailored to the local conditions, and as a movement, it seeks new ways of connecting food producers with consumers – an approach which is vital for food security.

Among the many different forms of agroecological production systems, only the products of organic farming are subject to world-wide regulation, with laws and private label guidelines. However, the various forms, whether codified organic or agroecological, all differ substantially from conventional, industrialised agriculture, as described in the Table. 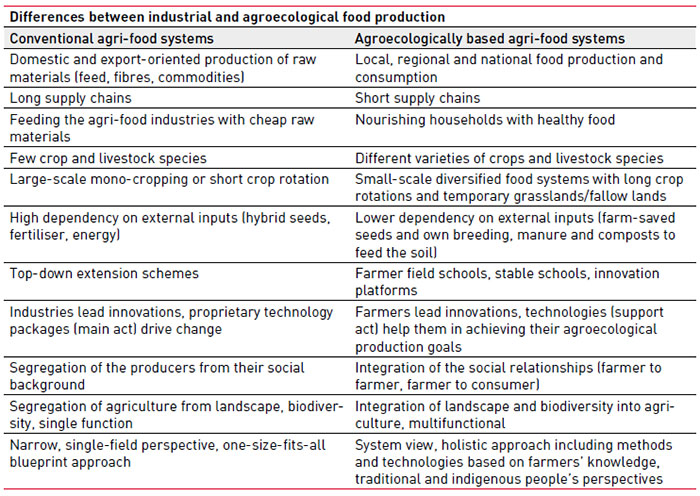 Competing concepts of making industrial agriculture more sustainable are also proposed, again purporting technology-oriented narratives. Proprietary techno-science packages are envisioned to be the primary key drivers of change and productivity increase, with yields of monoculture crops per area remaining the chief target and guarantee for food security. The Standing Committee on Agricultural Research to the European Commission (SCAR) contrasted two main types of proposals for change in their 3rd SCAR Foresight Exercise, published in 2011, and coined them ‘productivity narrative’ and ‘sufficiency narrative’. Sufficiency is one element of sustainability. It stands for moderation or temperance, i.e. for production and consumption adapted to the resources available.

Under the ‘productivity narrative’, scientific advances should deliver high-yielding varieties (preferably patent-protected, e.g. by using genetic engineering techniques) that are amendable to automated precision technologies, taking into account resource scarcities and environmental problems. The focus of these strategies is the more efficient use of external inputs, leading perhaps to less of them being used, but certainly not to their expendability. The increase in efficiency is to come about through high-tech solutions offering the required inputs packaged with the necessary technical (ideally autonomous) machinery, e.g. GPS-directed robots or drones, and, most importantly, the quintessential knowhow in the form of proprietary software (big data). In this vision, a farmer becomes either an investor, a ‘virtual farmer’ who runs the farm remotely from his/her home or office via a computer, or a farmer-technician executing the proprietary protocols and instructions developed by industry – for fees. Such technology-driven concepts are coined as ‘climate-smart agriculture’ or ‘precision agriculture/farming’. Moderation of production tailored to local conditions or reduction in consumptions are no-go areas in this narrative.

‘Precision agriculture/farming’ are terms that were coined in the USA and find their biggest supporters and developers among those global agriculture input, processing and trading industries who are the primary drivers behind the current destructive industrial agro-food systems. They are supported by governments in North America and the European Union who also help promoting these ‘CSA’ or ‘precision’ agro-food systems in those parts of the world where the most industrialised agro-food systems are already established, e.g. South America or eastern European countries.

Seemingly the same, but in fact different

Much of the rhetoric of CSA, but also ‘precision agriculture/farming’, is reminiscent of the wording used in agroecology, and builds on similar analyses. Ben Lilliston claims that such rhetoric creates ambiguity regarding the meaning of these terms and co-opts agroecology’s recent popularity while it simultaneously aims to “drown out the rising support for agroecology coming from both scientists and social movements”. Similar strategies were identified by Nicolas Lampkin and colleagues when comparing the different conceptual approaches to ‘sustainable intensification’ to genuine agroecological approaches. For instance, descriptions like “CSA is not a set of practices that can be universally applied, but rather an approach that involves different elements embedded in local contexts” borrows heavily from the language developed around agroecology. It also makes it sound like accommodating similar objectives as agroecology, such as food security, resilience, sustainable use of natural resources, reduced emissions and less deforestation. However, the main difference lies in what is not mentioned but is key to agroecology: small-scale farmers, food sovereignty, local supply, and circular and short production chains. Indigenous and traditional knowledge certainly has little to no value or role in the vision of CSA or precision agriculture.

In agroecological systems, scientific advances and technologies are also critical but assume a support role in helping to achieve the goal of developing highly productive agro-food systems that are respectful of ecosystems and resource saving through behavioural change and agroecological practices that are tailored to the local conditions. In contrast to the competing visions outlined above, agroecological approaches put food production and people at the centre, and farmers are key actors. Ideally, supporting technologies are offered at the capacity level of the farmers to master and own them. Education and training that increases the knowledge and skills of the farmers is crucial. This approach will require a fundamental change in the political, economic and institutional support structures. True agroecological transformation means ‘no business as usual’ anymore and requires a ‘system re-design’ aiming away from ruin, while all competing proposals try in one way or another to ‘conform’ to and, thus, rescue the current socio-economic and trading framework and, with it, the associated power and profit structures (see Figure). Consequently, they can at best offer approaches that we call ‘business-as-usual-light’ but that are still headed towards ruin – just a little later.

Angelika Hilbeck is a Senior Scientist at the Institute of Integrative Biology of the Swiss Federal Institute of Technology (ETHZ) Zurich in Switzerland.
Contact: angelika.hilbeck@env.ethz.ch

Bernadette Oehen is a Senior Scientist at the Department of Socio-Economic Sciences at the Research Institute of Organic Agriculture (FIBL) in Frick, Switzerland.

Conway, G. and K. Wilson (2012). One billion hungry: Can we feed the world? A policy briefing. Comstock Publishing Associates.

Food and Agriculture Organisation of the United Nations (2017). The State of Food Security and Nutrition in the World 2017.

Horling, LG and TK Madsen (2011). Towards the real green revolution? Exploring the conceptual dimensions of a new ecological modernisation of agriculture that could 'feed the world'. Global Environmental Change 21: 441-452.

United Nations Conference on Trade and Development (UNCTAD) (2013). Trade and Environment Review 2013 – Wake up before it is too late. UN Symbol UNCTAD/DITC/TED/2012/3, Geneva, Switzerland.