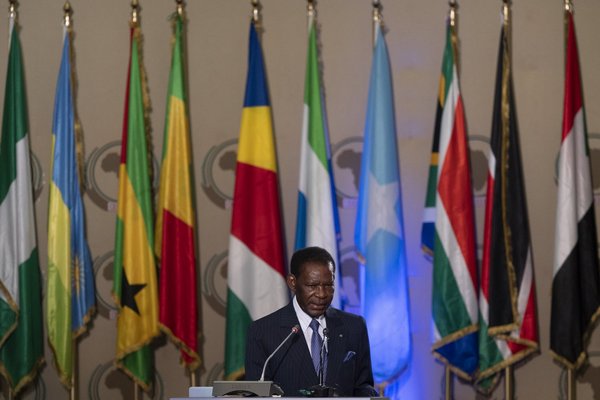 President of Equatorial Guinea, Teodoro Obiang Nguema Mbasogo, at the inaugural ceremony of the 32nd Session of the FAO Regional Conference for Africa.
Photo: © FAO/Andrew Caballero-Reynolds

African countries met to discuss the transformation of agrifood systems as the continent's aim of ending hunger by 2025 faces an unprecedented confluence of obstacles. They affirmed the centrality of women and young people in agrifood systems.

There is an urgent need to transform our agrifood systems in a sustainable way, said the president of Equatorial Guinea, Teodoro Obiang Nguema Mbasogo at the opening at this year's FAO Regional Conference for Africa (ARC32) that took place from 11-14 April 2022 in Malabo, Equatorial Guinea and online.

The conference brought together agriculture ministers and other government officials along with civil society groups, the private sector, development partners and observer member countries. Sixty-two Ministers from 54 African countries participated in the conference – country representation was one of the largest ever thanks to the hybrid mode, FAO reported, with more than half the ministers attending in person in Malabo, and the remainder joining online.

At the conclusion of the 32nd Session of the FAO Regional Conference for Africa, African countries have committed to raise their ambitions and accelerate their actions towards achieving the Sustainable Development Goals, including ending poverty and hunger.

In the ministerial declaration, they welcomed the FAO Strategic Framework 2022-2031 which shapes the organisation’s work towards achieving the Sustainable Development Goals under Four Betters: better production, better nutrition, a better environment, and a better life, leaving no one behind.

“We call on our partners to support our efforts through enhancing investments as we step up our efforts towards the transformation of agrifood systems through the implementation of the Four Betters,” Deputy Minister for Agriculture of Tanzania, Anthony Peter Mavunde said, reading the declaration on behalf of the ministers.

The ministers also affirmed the centrality of women and young people in Africa’s transformation of agrifood systems, and called on FAO to accelerate concrete actions to tackle the impacts of the climate crisis – calling it a “major threat to the African region.”

The conference was held during a particularly difficult time for Africa, with the Russia/Ukraine war causing instability to the continent’s food security, and a devastating drought in the Horn of Africa. On top of the climate crisis, long-standing regional conflicts and the ongoing COVID-19 pandemic, now in its third year, a severe drought is tightening its grip on East Africa.

The number of people going hungry in sub-Saharan Africa is on the rise again after years of decline. According to the latest numbers available, 282 million people on the continent, or over one-fifth of the population, don't have enough food, representing a rise of 46 million from 2019.

Close to 800 delegates participated in the four-day event, plus those following the discussions through the livestream. Participants included representatives from 34 inter-governmental organisations such as the African Union and ECOWAS, more than 30 civil society and academic organizations, and 28 private-sector representatives.