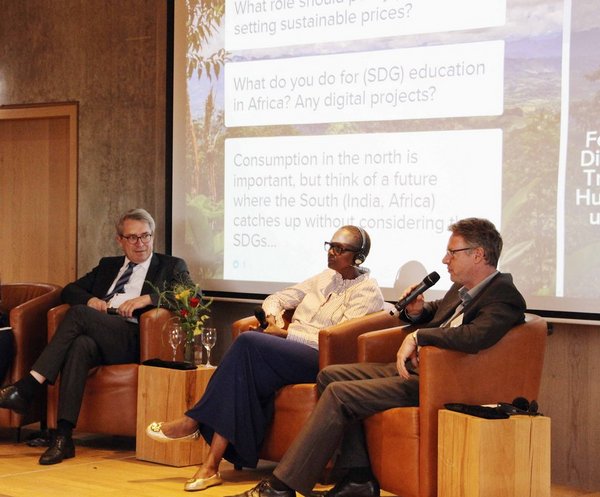 Gunther Beger, Wanjira Mathai and Christoph Heinrich (from left to right) discussing at the event in Hamburg, Germany.
Photo: GIZ

How tropical forests can save the climate and fight hunger

The German Federal Ministry for Economic Cooperation and Development (BMZ) together with the World Future Council invited to the innovation dialogue entitled “Forests for future – how tropical forests can fight hunger and save the climate” on the 15th of August 2019 in Hamburg, Germany. The innovation dialogues are a series of events run under the umbrella of the special BMZ initiative “One World No Hunger” (SEWOH).

Looking at the burning Amazon and Tundra, net deforestation still goes on and diminishes the global carbon sink, releasing huge amounts of stored carbon into the atmosphere. And even though the world is wasting 30 per cent of food produce through inappropriate farming practices and storage before it reaches our plates, illegal logging for arable land still goes on.

The conflict over land between food production and forest conservation calls for action. In 2019, Ethiopia planted 350 million trees, beating India’s world record of 60 million in 2017. But this is sadly only a drop in the ocean. Saving forests is a complex challenge.

Nowadays more than 1.6 billion people depend on forest resources. Not only does this include timber for construction purposes and firewood, but it also implies non-timber forest resources for food and feed and medicinal proposes. With a growing population, especially in Africa, pressure on resources will increase during the next decades.

Against this background the participants of the innovation dialogue in Hamburg discussed how to use our global forests sustainably and at the same time fight hunger and last but not least save our climate.

Christoph Heinrich of the World Wildlife Fund for Nature (WWF) maintains that forest and biodiversity always go hand in hand since 80 per cent of the living organisms are found terrestrial in forests, living in the soil and flora below the canopy of the trees. Heinrich stressed that resources were limited and that if their present use continued, they were “only protectable when we make use of DNA strings in the near future”.

Forests also offer shade and regulate water storage for entire watersheds, among other ecosystem services and functions. Gunther Beger of the BMZ explained that thanks to his ministry’s efforts in Tigray in Ethiopia, starting in 1993, soil degradation could be stopped and the land was re-fertilised with specific soil and water protecting measures, reducing pressure on intact forests about to be cleared for agricultural proposes. Moreover, the introduction of solar cookers in Ethiopia and elsewhere minimised the need for charcoal and firewood in rural areas, Beger furthered.

The African Forest Landscape Restoration Initiative (AFR100) is a joint agreement of more than ten African countries targeting to restore 100 million hectares of the continent’s land by 2030. The biggest challenge was a political commitment over such a long period, with changing heads of state in many countries.

“We have to take leadership and ensure a long-term financing through the Green Climate Fund and other measures such as Reducing Emissions from Deforestation and forest Degradation (REDD),” stated Wanjira Mathai of the Greenbelt Movement, Wangari Maathai Foundation and World Future Council. “It is a long-term and expensive restoration effort, especially when it comes to restoring degraded wetlands. You need people on the ground and have to create opportunities for the youth in the forest environment – a mindset change facing the same challenges like in agriculture. Forest management is also a rural and not an urban activity and still less attractive to work in.

During the discussion Beger noted that the BMZ was providing two billion euros a year for forest conservation world-wide.