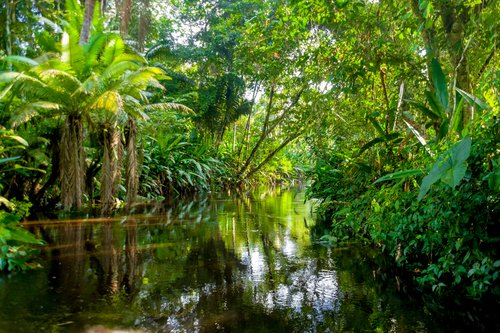 Protecting and restoring tropical forest regions is at the centre of the ProGreen Initiative.
Photo: Shutterstock

Germany’s Development Ministry is providing 200 million euros in support of a global programme to protect forests. The World Bank’s ProGreen Initiative was presented during the United Nations Climate Summit in New York/USA.

Opening the United Nations Climate Summit in New York on the 23rd September, World Bank Group President David Malpass and Germany’s Development Minister Gerd Müller announced a global forest conservation programme. According to the German Federal Ministry for Economic Cooperation and Development (BMZ), Germany is participating in the World Bank’s ProGreen Initiative with financial support to the tune of 200 million euros. The total financing volume is to reach a billion US dollars. The programme centres on the conservation and restoration of the tropical forest regions.

The BMZ states that in addition to the 200 million euros, a further 30 million euros is to be provided for the Central African Forest Initiative (CAFI), as well as 20 million euros for indigenous communities. Federal Minister Müller declared in New York that this amounted to a total of 250 million euros for global forest conservation. “Rainforests are the Earth’s green lungs. Alone the Amazon Rainforest produces 20 per cent of the world’s oxygen,” Müller explained. “But every four seconds, an area the size of a football pitch is deforested – above all to create gigantic palm-oil plantations.” He added that eleven per cent of CO2 emissions was caused by slash-and-burn forest clearance and forest destruction.

“We need an ambitious international forest conservation programme that clearly goes beyond the resolutions of the G7 Summit in Biarritz, France, in order to stop such developments,” the Minister declared at the Climate Summit. The World Bank’s ProGreen Initiative was to contribute to this. As the initiator of the new scheme, Germany was investing 200 million euros. In all, the country had already declared 160 million hectares of forest protected areas, representing 60 times the size of all Germany’s nature conservation areas together, the Minister stressed.

ProGreen is a new approach to combating global forest destruction. It centres on measures to protect and restore tropical forest regions, to prevent illegal logging, to support certification mechanisms for sustainable tropic timber and to back fighting forest fires.

Recognising and promoting the value of forests in the context of sustainable development is the motto of the joint partnership, the BMZ stresses in its press release.

PROGREEN initiative of the Worldbank