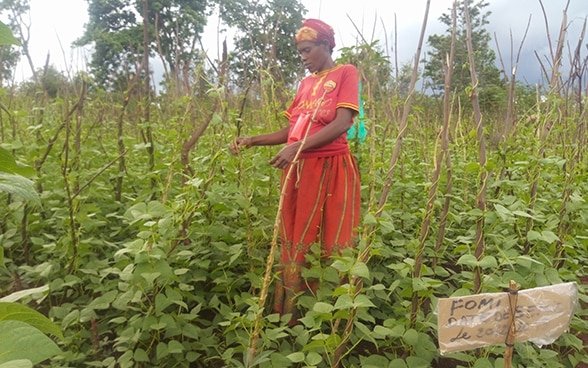 The average female smallholder farmer in Burundi owns around 0.2 hectares of land and uses the plot to feed her family.
Photo: ©DEZA/PABRA

Using an innovative approach, the Pan African Bean Research Alliance PABRA is combatting malnutrition in Burundi and at the same time improving food security, boosting the private sector and empowering women. Swiss development cooperation has been supporting PABRA for over 20 years.

Beans have the potential to combat malnutrition and simultaneously enhance food security, further the private sector and promote gender equality.

First and foremost, you have to have the right beans. Beans that can withstand weather extremes, are adapted to local conditions and rich in important trace elements such as iron and zinc, and above all, beans that produce a high yield.

For more than 20 years, the Pan African Bean Research Alliance, PABRA for short, has been working with partners like Switzerland in 32 African countries to breed such varieties (see box).

The best way to illustrate this is to follow a single bean on its journey along the bean corridor. Let’s call our bean Yakina.

Yakina is a climbing variety of bean scientifically known as MAC44. The speckled red legume grows in the hills surrounding Mount Heha in the western part of Burundi, one of the world's poorest nations. Over the past eight weeks, Yakina has been growing here in the fields of a woman smallholder farmer who works around one-fifth of a hectare of land.

She wanted to try out one of the new varieties of beans that she learned about in a PABRA workshop. She also received training on sowing, tending and cultivating the beans. In her first year growing them, she was able to nearly double her harvest compared to conventional varieties.

No more hunger and malnutrition

The farmer and her family now have enough to eat. Their health has also improved thanks to the properties of this type of bean: these beans have been biofortified to contain significantly higher amounts of iron and zinc, bringing years of malnutrition to an end.

It's now harvest time. The farmer and her family are busy with the harvest. The soil quality of her smallholding has improved since planting the beans, which in turn has boosted the quality of her other vegetable crops. This is because beans return nitrogen to the soil instead of depleting it.

After the harvest, Yakina is dried along with the other beans and filled into sacks. The beans used to get attacked during storage by pests like the bean beetle. For this reason, PABRA introduced the farmers to PICS bags, which can be hermetically sealed. Local companies have taken over production and sale of the bags, and PABRA was also able to convince the Burundian government to subsidise them. This has made the bags both accessible and affordable to people living in remote areas.

The farmer keeps a part of the harvest to feed herself and her family. Ever since she visited a nutrition workshop organised by PABRA, she has been able to serve more meals with more variety. Armed with a new sense of self-confidence, the farmer even starts taking a more active part in discussions about the future of her community.
Meanwhile the farmer's husband has used his mobile phone to register on a bean platform to sell his wife's beans. Thanks to this platform, which was organised by PABRA, he is able to reach more buyers and therefore fetches a better price.

The beans were sold to a company in the capital Bujumbura, founded and run by a woman. The company produces flour and has been expanding steadily for years. There, the beans are processed in a new mill, financed with Swiss funds, and then filled into kilo packs.

Yakina has arrived at the last stop on her journey.

One of the SDC's longest-lasting programmes 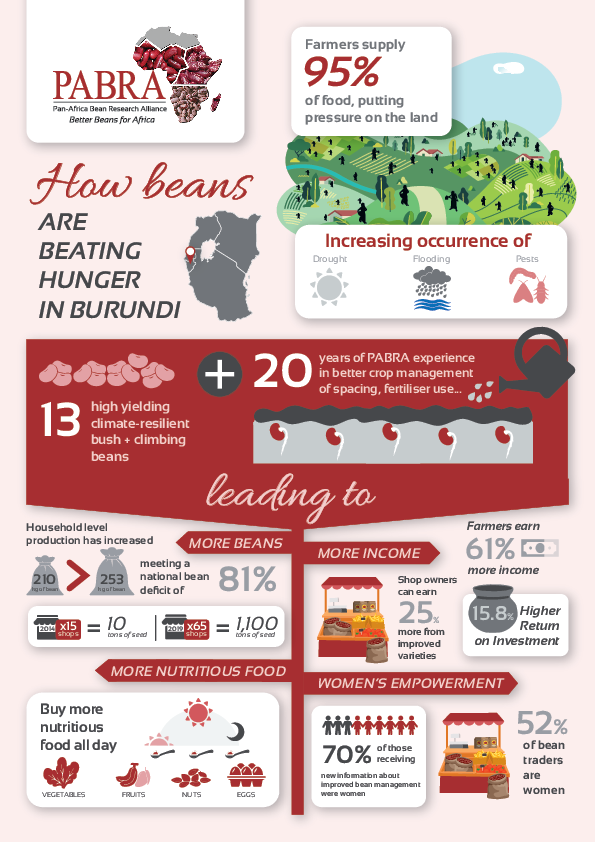 How beans are beating hunger in Burundi. PABRA's results speak for themselves. ©PABRA

The Swiss Agency for Development and Cooperation (SDC) has been a supporter of PABRA and its predecessor organisation since 1983, making it one of the SDC's longest-lasting programmes. And with good reason: PABRA produces tangible results (see infographic) and shares the objectives of Switzerland's Foreign Policy Strategy 2020–23. The organisation creates local jobs, offers responses to climate change and addresses the push factors driving migration.

Cooperation with government authorities such as the Burundi Institute of Agronomic Sciences (ISABU) has helped PABRA reach over 1.2 million smallholder farmers in the country, who are now able to work with improved varieties of beans.

PABRA will stay the course – with Swiss development cooperation offering its continued support.

About PABRA – Pan-Africa Bean Research Alliance
PABRA is an international network of scientists, smallholder farmers, private companies, governments, policymakers and civil society organisations working in 32 countries throughout sub-Saharan Africa. PABRA is coordinated by the International Center for Tropical Agriculture (CIAT), a research centre of the Consultative Group for International Agricultural Research (CGIAR). PABRA's main mission is improving the living conditions of smallholder bean farmers, many of whom are women. This is made possible via efficient networks, solid research and improved seed systems. PABRA has reached over 38 million farming households and 200 private companies in the bean sector throughout Africa to date.