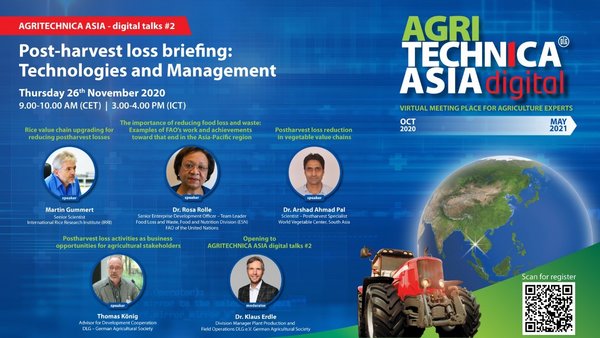 The digital talks are part of a series of activities by the German Agricultural Society (DLG) addressing the reduction of post-harvest losses in Asian countries.
Photo: DLG/Agritechnica Asia

The Agritechnica Asia and Horti Asia digital talk about Post-Harvest Losses, which took place in late November, addressed the avoidance of losses by improved process management and handling of crops as well as opportunities to fund collaborative projects to introduce new technologies.

Food loss and waste have been perceived as a major concern for decades. The UN Agriculture and Food Organization (FAO) hosted the first International Day of Awareness on Food Loss and Waste Reduction in late September 2020, with participants from around the world. Several speakers stated that current gross food production would suffice to feed the world´s population. At the same time, FAO data clearly showed that globally, one third of food was lost or wasted, making food loss and waste a major reason for hunger and malnutrition.

Secondly, a lot of resources used in food production are being wasted due to food loss and waste. This is particularly critical where scarce resources such as land, water, phosphorus are concerned.

Thirdly, food loss and waste cause tremendous economic deficit world-wide which can be turned into business opportunities at various stages along the food value chains. Since food loss and waste happen at all levels, all actors within food systems are involved in one way or another: farmers, wholesalers, merchants, food processors, transporters and consumers. So, addressing as many stakeholders as possible to raise awareness on this topic is useful and important. Advertising adequate technical equipment helps to keep a larger share of agricultural harvest for what it has been produced for.

Against this background, AGRITECHNICA ASIA broadcasted its #2 digital talk on “Post-harvest Loss Briefing: Technologies and Management”. Four invited speakers from Asia and Europe gave insights on technical options, management skills and knowledge, as well as business opportunities. In many countries, these aspects hold a huge potential along the value chains to address several SDGs all at once by reducing food loss and waste.

Reducing losses by up to 80 per cent with improved technologies

Rosa Rolle, Senior Enterprise Development Officer at FAO, showed that improved technology was already enabling a 70 to 80 per cent loss reduction in mango processing. This was achieved with quite simple technologies, such as washing mango fruits with warm water to stabilise the fruit skin against damages. Rolle also advertised the Community of Practice (CoP) on the FAO Website as a platform to exchange ideas and experiences globally.

Arshad Ahmad Pal, Postharvest Specialist at the World Vegetable Center (WorldVeg) India stressed that farmers might already have a strong impact on the quality of the products during harvest “The damage is not visible at that time. But its effects can be seen further down the value chain,” Pal, who gives training courses on post-harvest issues in South and South-East Asian countries, explained. He noted that such factors reduced quality and prices for all stakeholders.

“Reducing post-harvest loss is not just bringing in new technologies. You really have to look in value chain upgrading,” added Martin Gummert, an IRRI Senior Scientist from The Philippines. Gummert referred to experiences from Myanmar, where IRRI had developed and implemented best practices to upgrade the rice value chain. One of the simple but effective technologies could be moisture meters to assess crops´ moisture before storing them, according to Thomas König, Advisor for Development Cooperation at the German Agriculture Society (DLG), Germany, as he presented in his contribution. However, it has been observed across South-East Asia that many farmers did not use this method as they do not acknowledge its benefit, Gummert argued in contrast to this proposal.

More awareness may be required to convince stakeholders how important a proper and careful handling of crops is after harvest. A better visibility at trade fairs could probably help to indicate the relevance of measuring crops´ moisture after harvest to effectively avoid aflatoxin attacks on staple food. Achieving this and implementing other efforts requires finance. “The German government provides funding addressing both, private investors and NGOs,” König pointed out, adding that many funding schemes were based on shared efforts and risks to achieve something.

All contributions and the entire discussion are available on the Agritechnica Asia-homepage, starting with a “Reducing Post-harvest loss in 100 seconds” explanatory video clip.

This digital talk is part of a DLG series of activities addressing the reduction of post-harvest losses.

So far, DLG International has displayed information material on trade fairs in several African countries, which had been developed jointly by DLG Competence Center Agriculture, the GIZ Sector Project Sustainable Agriculture NAREN, and the University of Kassel in Germany.