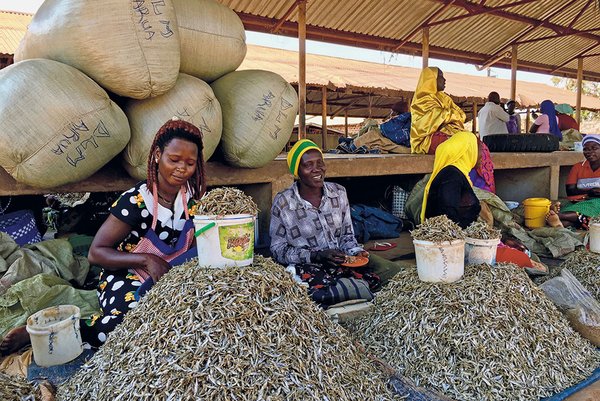 For many women, selling small fish is an important source of income.
Photo: Anne Regtien

Small fish with a big potential

African inland fisheries are increasingly reliant on the capture of small fish species that are sundried and traded to reach consumers often at large distances away from where they were produced. Largely unrecorded, the “hidden catches” go a long way in alleviating “hidden hunger”: as they are consumed whole, small fish are an important source of micronutrients for many Africans. Only that, unfortunately, politicians haven’t yet realised this.

Capture fisheries are an important economic subsistence activity all over Africa, supporting 200 million Africans directly or indirectly through food and income. While conspicuously absent in global debates about food security, small indigenous fish species have always played an important but unrecorded role in African food systems. Along the shores of rivers, swamps, lakes and ponds, fishers, mostly women, can be seen fishing with baskets or small lift nets lined with mosquito-netting, catching a host of small fish species “for the pot”. Of the 3,500 African freshwater fish species, 60 to 70 per cent do not grow larger than 15 cm, but most have small populations. Around four decades ago, many African lake fisheries saw a shift from targeting larger catfishes, carp, and tilapia to include large catches of open water species such as small freshwater herrings, carps and characins that do attain large population sizes. In dried form, these fish find their way to the markets of any African city. Kapenta caught in Lake Kariba, Zambia, is traded in Johannesburg, Dagaa from Lake Victoria is found in Juba, South Sudan, and the pygmy herring from Lake Volta, of only 3 cm maximum length, is hawked in small plastic bags as “one-man-thousand” on the streets of Tamale in northern Ghana. Sold in small quantities and eaten whole, small fish are accessible to many households and are thus an indispensable source of animal protein and micronutrients in many African societies.

The recent boom in small fish fisheries targets species that all are highly productive and can sustain very large catches. With high turnover rates, annual biological production of small fish can reach up to six times their average biomass (see Table), meaning that they sustain large catches and can hardly be overexploited with current fishing methods. For example, the largest freshwater fishery in the world is on Lake Victoria’s Dagaa. Carried out at night through light attraction, catches reach around 450–550 thousand tonnes annually. To give a sense of magnitude, hypothetically, this catch could provide 25 grams of dried fish once a week to all 144 million inhabitants of Kenya, Uganda and Tanzania. Yet, fishing pressure is still low, and the potential sustainable catch of Dagaa is estimated to be around 2 million tonnes. In a survey of eight large African lakes with more detailed information on ecosystem properties and fisheries, the total potential yield of small fish was estimated at around 5 million tonnes per year, of which only 15 per cent is utilised today. This unparalleled level of production, simple capture methods and reduced availability of bigger species due to heavy exploitation are the main reasons for the recent considerable increase in fishing effort and catch.

In all cases, small species are sundried after landing. Sun-drying is the most environmentally friendly and energy-efficient processing technology available, requiring limited investments to obtain potentially high-quality products. Nevertheless, the main bottleneck in utilising the full potential of small fish fisheries is precisely in this first stage of processing, as drying usually takes place directly on the beaches and lake shores or on nets. Rainy seasons, overheating and mixing with sand and soil cause high quality losses. Fish is re-dried after rainfall, but then becomes unfit for human consumption and enters the animal feed value chain. For example, 60–70 per cent of the Dagaa caught in Lake Victoria is used as animal feed. Simple raised racks or more sophisticated solar-dryers would greatly increase the quality of dried produce but are rarely used in any of the small fish fisheries. Recent work in Kenya and Uganda showed that first-stage processing, mostly carried out by women, on average hardly adds value due to the low prices for low quality fish, thus limiting their capacity to invest. In general, women involved in the small-fish processing sector are constrained by bad working conditions, poor market and transportation infrastructure and limited financial and business services. Strengthening women’s capacity to invest would lead to both improvements in nutrition and health for their families and to improved value chains.

Once dried, small fish is packed in large bags and transported by any means possible: bicycles, motorcycles, vans, mini-buses and trucks. The advantages of small fish become especially clear in this stage of the value chain as they can be packed in large quantities and stored with a shelf life of over six months. Local and regional traders buy directly from the shore and transport to rural, roadside and urban markets at destinations often far from the origin of the fish (see Table). Specialised wholesale markets exist, as for instance the large Kirumba market in Mwanza, Tanzania, or the large fish-markets in Kumasi, Ghana, from where fish is transported to all major towns and again to surrounding rural areas. Low-quality dried fish is re-processed into fishmeal, which is mainly used in poultry feed. The emerging aquaculture industry shuns the low-quality meal and still relies on imports from marine sources. Most of our knowledge here is from the Dagaa value chain. Very little is known about the proportions of small fish of other freshwaters going into human consumption and animal feed value chains.

Product diversification is in its infancy. Occasionally packaged salted-dried or deep-fried fish is offered as a snack, while fish-powder is used in baby food or as fortification of porridge served in hospitals. But the heaps of sun-dried small fish that are sold in small quantities to consumers continue to dominate trade and are found in all African fish markets. A recent short online survey in Kenya, focused on urban consumers, found that, despite its slightly bitter taste, more than 50 per cent consumed Dagaa, 80 per cent of those daily to at least once a month, while over 70 per cent bought it at a local market. Like the dried sardine species, which have a sweeter taste, Dagaa usually is cooked as part of a stew that goes with the various staple foods known to African cuisine. While important as an animal protein source, small fish is eaten whole, including bones and intestines, which makes it particularly nutritious as it is rich in numerous micronutrients such as iodine, vitamins B12, D and A, long-chain fatty acids including omega−3, and calcium, iron and zinc. All play a critical role in cerebral development, immune defence and general health.

Small fish always have been part of subsistence fisheries in African water bodies, but they are conventionally regarded as of “low economic value” and consequently have low priority in policies. Current fisheries policy, also in Africa, has a narrow focus on productivity gains and economic output, concentrating on international trade and markets. This is reflected in the global food security discourse that does not recognise the nutritional qualities of fish. Sustainable development goals do not mention fish in strategies to combat nutrient deficiencies (SDG 2), while nutrition and food security are not the primary focus of SDG 14, life below water, which, incidentally, also does not mention the freshwater resources that play such a dominant role in African fisheries.

Fish represent by far our biggest source of harvestable protein. Of all food production systems, capture fisheries are the most energy efficient and have the lowest environmental impact in terms of greenhouse gases and use of freshwater, fertilisers or pesticides. Africa relies quite heavily on fish, which forms 18–20 per cent of the animal protein intake per capita overall, including several landlocked countries. Catching small pelagic fish, sundried with a long shelf life, sold in small quantities and consumed whole, is the most high-yielding, eco-friendly and nourishing way of utilising the natural food that aquatic ecosystems provide. Moreover, the unique nutrient content of fish plays a significant role in combating the triple burden of hunger, micronutrient deficiencies and non-communicable diseases. The huge underutilised production potential of small fish could be realised with proper policy attention as well as public and private investments. There is room for diversification of production systems and improved value chains through investments in commercial, technologically advanced and professionally managed chains focused on scale, next to and including a shift to nutrition-sensitive fisheries policies aimed at improving the existing, thriving, African small fish chains.

Paul A.M. van Zwieten is Assistant Professor of Fisheries Management at the Aquaculture and Fisheries Group, Wageningen University, Netherlands, with long-term experience in working in small-scale freshwater and marine fisheries in tropical regions in Africa and South-East Asia. His main research interest is in data and information requirements to evaluate fisheries resource use in data poor situations, spatial use of fisheries resources (fishing effort allocation) and fishing patterns (balanced harvesting).
Contact: paul.vanzwieten@wur.nl