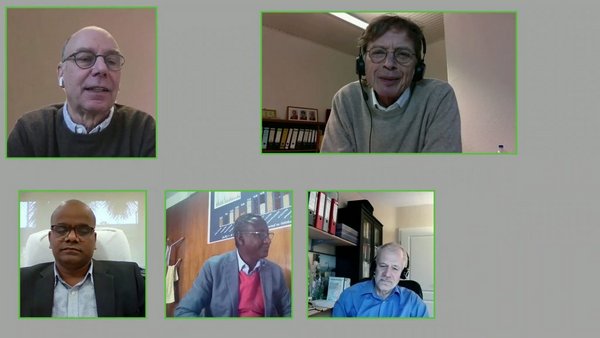 The panellists at the GIZ Expert Panel on the role of the seed sector in securing food production in times of climate change and pandemics.
Photo: GFFA

Improving the seed sector to strengthen the resilience of agriculture

How to feed the world in times of pandemics and climate change was the topic of this year’s Global Forum for Food and Agriculture – GFFA. The Expert Panel of Deutsche Gesellschaft für Internationale Zusammenarbeit (GIZ) dealt with the significance of climate change-adapted seed to secure global food availability.

Climate change, natural disasters and pandemics particularly affect countries in Asia and Africa. The agricultural sector is increasingly faced with ever more extreme heat and cold spells followed by heavy rainfall and floods. This has devastating effects on food security, especially for rural populations. Ensuring high-quality seed production adapted to the challenges of climate change is becoming increasingly important and constitutes the foundation of resilient agricultural production.

The role of the seed sector in strengthening the resilience of agricultural production was at the centre of an Expert Panels held as an online platform in mid-January on the occasion of the Global Forum for Food and Agriculture (GFFA) and co-hosted by Deutsche Gesellschaft für internationale Zusammenarbeit (GIZ) GmbH.

Providing healthy and high quality seed for farmers, especially those in the countries of the Global South, and enabling the local production of this seed was an important objective of the German Federal Government, explained Friedrich Wacker, Head of Directorate on EU Affairs, International Cooperation and Fisheries of the German Federal Ministry of Food and Agriculture, on the Expert Panel. Wacker emphasised that secure seed production required a politically friendly environment, which was one reason why German development cooperation was involved in seed development. Here, it was pursuing two goals to be presented at the forum:
- establishing seed banks and seed propagation of landraces in Ethiopia as well as
- supporting the Indian seed sector with expert support from seed research and promoting seed partnerships platforms.

The focus of the German-Ethiopian project in Ethiopia itself was the setting up of a gene bank and supporting smallholder farmers in breeding resilient and certified seed based on landraces, explained Dr Rebeka Gebretsadik Teshome, Senior Seed Expert for the GIZ-led Supporting Sustainable Agricultural Productivity Program in Ethiopia. The project aimed at locally supporting seed production, e.g. by running a programme to train farmers as seed breeders. These farmers had already organised themselves in nine seed production cooperatives and were supplying 11,000 farmers with certified seed, which had resulted in considerably better living standards for breeders and farmers, according to Gebretsadik.

In parallel, it was important to improve the national gene bank, which the local plant breeder could make use of.

Ethiopian agriculture was facing considerable challenges, for its growing population demanded an increase in food production, and this was hardly achievable under climate stress, weak infrastructure and its low level of agricultural yield. High quality and stress-tolerant seed was one way to raise productivity, explained Dr Peer Wilde of the German seed breeding company KWS. For this purpose, it was necessary to integrate the farming population into seed production in order to make such seed locally available for agricultural production. KWS has been advising the Ethiopian Institute of Agricultural Research (EIAR) since 2017. The focus was on the development and propagation of regionally adapted and resilient barley and faba bean varieties, Wilde explained.

India’s seed sector can look back on a long history and has existed since the mid-fifties of the past century, as Dr K. Keshavulu, Managing Director of Telangan State Seed Organisation, pointed out, explaining that the seed sector was organised at national Federal State and regional level, with close cooperation among government institutions, science and the private sector.

However, India’s secure supply of agricultural products was increasingly becoming a challenge due to the continually growing population and climate change, Keshavuli told the GFFA expert panel. The availability of high-quality seeds and seedlings, which are adapted to the local environment, was of paramount importance.

Dr Sowmini Sunkara, national project coordinator of the Indo-German Cooperation on the Seed Sector Development, added that German-Indian cooperation focused on establishing seed certification offices and the support of private breeding farms with the aim of producing high quality certified seed which ought to be adapted to the climate conditions in the region. Stress- and drought-tolerant varieties were at the centre of seed breeding targets.

Dieter Rücker of the Federal Association of German Plant Breeders took a look at the European seed sector. Here, he stressed in particular that in Germany and Europe, only certified seed might be used. This ensured that farmers were receiving healthy and clean seed, and that sacks only contained the right variety. And ultimately, Rücker emphasised, this also benefited consumer protection.

He also referred to international seed systems such as the International Seed Federation or the OECD Schemes for the Varietal Certification of Seed. More international partnerships would be required in order to accelerate know-how Transfer, Rücker noted, concluding his deliberations.