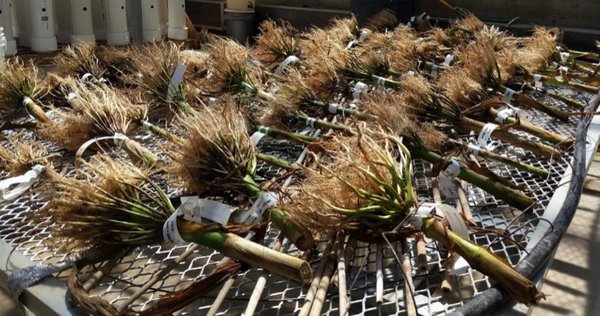 A previously unknown root trait allows some cereal plants to grow deeper roots capable of punching through dry, hard, compacted soils, according to researchers of Pennsylvania State University (U.S.A.), who suggest that harnessing the inherited characteristic could lead to crops that are better able to deal with a changing climate.

Various factors determine soil fertility – a particularly important one is mechanical impedance. If the soil is hard and compacted, there are few pores permitting water infiltration and storage and giving roots a chance to grow. “Compacted soil layers constrain crop productivity by restricting root growth and exploration in deeper soil layers, which in turn limits access to nutrients and water,” explains Hannah Schneider from Pennsylvania State University in University Park, U.S.A. However, there are plant species and varieties whose roots penetrate even hard soils comparatively well and make use of deeper strata. As a result they ultimately perform better under drought or low soil fertility.

A new trait is emerging

The basis for these abilities is still not fully understood, and this is the research topic chosen by Schneider and her colleagues at Pennsylvania State University. A focus in their current study was on investigating the physiological traits of the roots of various genotypes of corn and wheat in connection with their ability to penetrate hard soils.

Plants were grown on soils of differing compactness in experiments in greenhouses and the field. Subsequently, their ability to penetrate the soil was documented, together with the associated biomass growth. Modern analytical techniques gave the researchers insight into the fine structure of the roots and their mechanical strength.

With this, the team showed that plants with particularly efficient roots display a feature described as multiseriate mortical sclerenchyma (MCS). This is strengthening tissue directly below the surface of the roots, characterised by particularly small cells with thick walls. Such roots also have a higher concentration of lignin, according to the researchers. This is a complex organic polymer which is important in forming cell walls, particularly in wood and bark, and makes them stable.

The studies show that more lignin also gives MCS roots greater tensile strength and greater root tip bending force compared to non-MCS genotypes. This is particularly helpful in penetrating hard soil layers. The root system of corn genotypes with MCS reached 22 per cent deeper into the compacted soil than lines without this trait. The associated optimisation of use of nutrients and water was also reflected in surface growth, where the plants showed 39 per cent higher shoot biomass.

“We observe MCS in corn, wheat, barley and many other cereal crops, and our work suggests that many of the benefits of MCS may be analogous across different species” Schneider says. “MCS could be an important trait for stress tolerance and increased yields in cereal crops.” The researchers have already discovered hints of the genetic basis of the trait. This shows that deliberate selection of the trait is possible in breeding programmes.

Corn plants with roots which can penetrate deeper in hard soils have the potential to improve nutrition in problematic regions, according to the researchers. This is especially true in the face of a changing climate that is making vast areas more drought-prone. “The discovery bodes well for global agriculture, as the trait increases drought tolerance, nitrogen efficiency, and carbon sequestration,” according to co-author Jonathan Lynch of the University of Nottingham in Leicestershire, UK. “Breeding for this trait should be helpful in developing new crops for climate mitigation,” he notes.