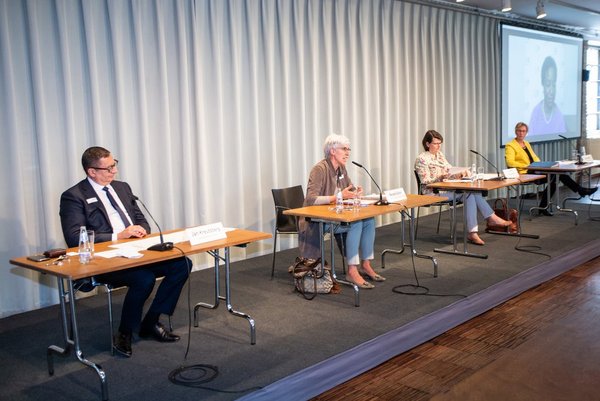 “We should all be outraged!”

Every day, the human rights of thousands of girls are violated throughout the world – with the families and the environment they are living in often being fully aware of this. As a partner of the UN Population Fund, the Deutsche Stiftung Weltbevölkerung campaigns for women’s right to reproductive health and sexual self-determination.

Every day, 33,000 girls are married before their 18th birthday. Each year, more than 4 million girls are victims of Female Genital Mutilation (FGM). Around 140 million girls are considered missing in the population statistics – owing to gender-based sex selection foeticide or because they are neglected so much as young girls that they die. These are only some of the alarming figures from the State of the World Population Report published by the United Nations Population Fund (UNFPA) under the title “Against my will. Defying the practices that harm women and girls and undermine equality” in late June 2020.

The report refers to 19 specific harmful practices violating the physical and mental integrity of girls and women, ranging from breast ironing through stoning to virginity testing. Female genital mutilation, child marriage and extreme bias against daughters in favour of sons are the most prevalent of these practices.

Denying the right to self-determination

“Every human being has a right to health and an unscathed life.” With her statement marking the presenting of the report in Berlin, Germany, Parliamentary State Secretary at the German Federal Ministry for Economic Cooperation and Development (BMZ) Maria Flachsbarth clarified what the above-mentioned practices are, namely serious human rights violations. For the roughly 200 million girls and women around the world who are affected by FGM today, every pregnancy, every birth means putting their life at risk – provided that they do not already die as a result of being mutilated. As a rule, girls who are already married as children – which applies to about 650 million girls and women alive today – have neither a chance to attend school nor to economic independence. They are dependent on their husbands and male relatives for all their lives, not to mention the physical and mental hazards of teenage pregnancies.

Laws are good, but not enough

“We should all be outraged. We must all take action!” UNFPA Executive Director Natalia Kanem’s demand was above all addressed to governments, whose duty it was to protect women and girls. For although practices such as FGM or child marriage are banned in most countries, not only do they occur, but they are de facto not prosecuted, being too deeply rooted in society. They are present in numerous regions, cultures, religions and ethnicities. What they all have in common is the desire to control women’s bodies and lives. Therefore, Kanem argues, the problem can only be solved by tackling the root causes: gender discrimination and stereotypes.

This can be achieved best by men being actively integrated in information and education activities, as is for example the case in a project in Guinea in which the BMZ is cooperating with schools and religious leaders in the field of sex education. Here, Flachsbarth explained, the imams had also participated in radio campaigns against FGM. For frequently, the consequences of the practices, such as the link between female circumcision and maternal mortality, are not known. Here, appropriate education and information could have a huge impact, the Executive Director of the Deutsche Stiftung Weltbevölkerung (DSW), Jan Kreutzberg, agreed, referring to experience in Africa. “Many boys and men already reject harmful practices as soon as they are aware of the impact they have,” Kreutzberg said. “This is where we have to carry on and break the silence.”

New threats through COVID-19 and medicalisation of practices

However, despite progress in numerous areas, the numbers of women and girls affected by child marriages and FGM are on the rise, owing to population growth, but right now, also to the impact of the corona pandemic. For the more girls and women vanish from public life, and hence social control, the more services and programmes remain shuttered, the easier girls will become the victims of prohibited rituals. And the more their parents are affected by the economic impacts of the pandemic, the more readily they will push their daughters into wifehood. The UNFPA Executive Director drew attention to a further worrying trend over the past few years. Whereas FGM is most widespread in rural areas, where many people live in poverty, a medicalisation of practices is taking place in urban areas. More and more frequently, physicians, nurses and midwives are participating in genital mutilation.

The UNFPA, DSW and BMZ representatives agreed that ending early marriages of children and FGM could be eliminated within the coming ten years, contributing to achieving the targets of Sustainable Development Goal (SDG) 5. This required investments of 3.4 billion US dollars a year – for measures to establish gender equity and for programmes promoting education for girls and women and asserting their right to reproductive health and sexual self-determination. “To achieve this, we must all join forces – government and non-governmental actors, women and men,” former DSW Executive Director Renate Bähr maintained.