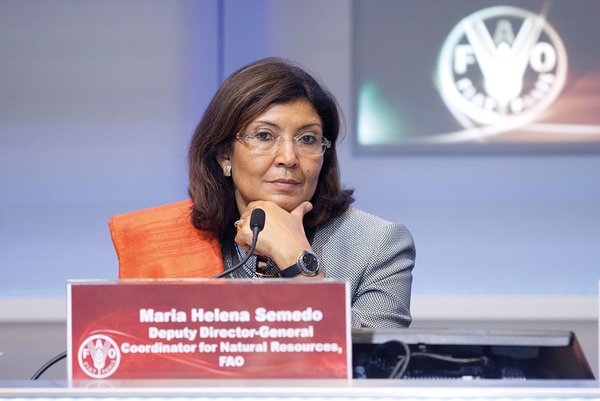 Maria Helena Semedo joined the UN Food and Agriculture Organization in 2003. In July 2009, she was appointed FAO Assistant Director-General/Regional Representative for Africa. Since 2013, she has been FAO Deputy Director-General, Coordinator for Natural Resources.
Photo: FAO/Giuseppe Carotenuto

“We must highlight the pluses of pulses”

The United Nations declared 2016 International Year of Pulses. Ms Maria Helena Semedo, Deputy Director-General, Natural Resources, of the UN Food and Agriculture Organization (FAO), explains why these crops are so valuable for a nutritious diet and the livelihoods of farmers.

Rural 21: Ms Semedo, the slogan of the International Year of Pulses is “Nutritious seeds for a sustainable future”. Why are pulses so important both in nutrition and with a view to sustainability?
Maria Helena Semedo: From a health point of view, pulses have a high nutritional value – they are packed with nutrients and are good sources of protein. Pulses are made up of about 20–25 per cent of protein by weight, which is double the protein content of wheat and triple that of rice. When eaten together with cereals, the protein quality in the diet is significantly improved, and a complete protein is formed.
Pulses have a low fat content and contain zero cholesterol. The Glycaemic Index – an indicator of the effect on blood sugar – is also low in pulses, and they are a significant source of dietary fibre. Since they do not contain gluten, they are an ideal food for coeliac patients. Additionally, pulses are rich in minerals – iron, magnesium, potassium, phosphorus, zinc – and B-vitamins – thiamine, riboflavin, niacin, B6, and folate –, all of which play a vital role in health.

Pulses are a vital source of plant-based proteins for people around the globe and should be eaten as part of a healthy diet to address obesity, as well as to prevent and help manage chronic diseases such as diabetes, coronary conditions and cancer; they are also an important source of plant-based protein for animals.
In terms of sustainability, pulses are leguminous plants that have nitrogen-fixing properties which can contribute to increasing soil fertility and have a positive impact on the environment. It has been estimated that legumes can fix between 72 and 350 kg of nitrogen per hectare per year. Additionally, some species of pulses are able to free soil-bound phosphorous, which also plays an important role in the nutrition of plants. These two features are particularly important for low-input agricultural production systems and agro-ecological principles because they allow a drastic reduction in the use of fertilisers. At the same time, with rotations including leguminous crops, future production can be continued on the same plot of land. Pulses in intercropping systems not only allow a higher underground utilisation efficiency due to their root structures but can also reduce pesticide utilisation, and deep rooting pulses like pigeon peas can supply groundwater to intercropped companion species. The use of indigenous pulses such as bambara beans might contribute to improve food security because they are adapted to local production and consumption systems. Finally, it is important to note that pulses are highly versatile and can be used in different agricultural production systems like rotations, intercropping, ley-farming and, of course, as a cover crop.

Pulses have been grown for centuries, and for many people, they are part of the daily diet. How can it be that their value has sunk into oblivion over the past years?
It’s true that world-wide, pulse crops such as lentils, beans, peas and chickpeas are a critical part of the general food basket. The production of beans, chickpeas and lentils dates back to 7000–8000BC! From Italy to India, we can find pulses as part of traditional menus. Indeed, FAO has always recognised the importance pulses play for both custom and well-being, and you’ll find that we’ve long encouraged the use of pulses in our nutritional guidelines. I wouldn’t say that pulses have sunken into oblivion over the past years – they are still widely used as part of daily and staple diets. Nonetheless, the production and consumption of pulses, in per capita terms, has seen a slow but steady decline in both developed and developing countries. According to FAO, this reflects not just changing dietary patterns and consumer preferences but also the failure of domestic production to keep pace with population growth in many countries. We need to revitalise the virtues and advantages of pulses in the larger public eye – and for this, the International Year of Pulses is a really great opportunity!

What is the role of pulses today for the nutrition and livelihoods of smallholders?
Pulses can contribute both to the nutrition and livelihoods of smallholders. Firstly, as mentioned above, pulses have a high protein and mineral content – eating them regularly can help improve overall health and nutrition. Secondly, pulses can enhance livelihoods by optimising and sustaining production in pulse-cereal crop rotations. In such rotations, subsequent cereal yield and crude protein concentration can be increased due to the residual nitrogen provided by the previous pulse crop. As already noted, including pulses in intercropping farming systems and/or cultivating them as cover crops enhance soil fertility and reduce dependency on chemical fertilisers by fixing nitrogen and freeing phosphorous, thus contributing to a more sustainable production system. In addition to offering a shelf-stable supply of food, pulses crops can provide additional income to producers by being sold and traded. Pulses are high-value crops, usually getting two to three times higher prices than cereals. Local processing of pulses can also offer further employment opportunities in rural areas. As well, some variety of pulses can cope with climate change impacts, which is of particular interest to disaster-prone areas.

At the moment, we don’t have sufficient data and information on the real contribution of pulses to household food security and nutrition – we hope that this important issue will be better documented and explored during the International Year of Pulses.

On the one hand, we are facing a combination of hunger and malnutrition, and on the other, nutrition-conditioned illnesses caused by food that is too rich or simply by the wrong food. This phenomenon is set to grow as urbanisation progresses and eating habits change among the burgeoning middle classes in countries such as China and India. Where do you think pulses could still play a role?
Indeed, this is really the two sides of the same problem – what we call the double burden of malnutrition – that we’ve seen evolving these last years. By promoting the dietary virtues of pulses, we hope to boost their popularity and use in cooking habits and trends. Pulses are an important part of a healthy diet because they are high in protein, fibre and other essential nutrients. Their high iron and zinc content is especially beneficial for women and children at risk of anaemia. Pulses also contain bioactive compounds that show some evidence of helping to combat cancer, diabetes and heart disease, and some research indicates that eating pulses regularly can help control and combat obesity as well.

Many small family farms lack awareness of the value that pulses bear both in terms of nutrition and health and regarding the conservation of soil fertility and the adaptation of agriculture to climate change. Often, the target group for nutrition counselling is women, while men are frequently the target group for agricultural extension. Wouldn’t it make sense to link agricultural extension more strongly with nutrition counselling?
Absolutely – and in fact, this multipronged, multi-stakeholder approach is something FAO has been doing for years. We need to tackle and target these issues in a holistic way. When we work with countries, colleagues and communities on the ground, we try to make sure to include a full range of stakeholders across all levels in order to be able to discuss and promote nutritional guidelines, good practices and knowledge exchange, responsible policies, smart partnerships, etc.

Which stakeholders have to become active in particular to achieve the goal of the International Year of Pulses – raising awareness and boosting production and trade?
The International Year of Pulses 2016 is designed to heighten public awareness of the nutritional benefits of pulses as part of sustainable food production aimed towards food security and nutrition. In this way, we are hoping to create a unique opportunity to encourage connections throughout the food chain that would make better use of pulse-based proteins, further global production of pulses, better utilise crop rotations and address the challenges in the trade of pulses. Overall, international trade in pulses has grown rapidly, much faster than output. And the value of pulse exports has grown even more rapidly, especially in recent years – rising from 2.5 billion US dollars in 1990 to about 9.5 billion US dollars in 2012. For the future, international trade in pulses is likely to continue growing. So we need to reach producers – especially smallholders – and encourage further growth. But we must also reach a wide audience – from farmers to nutritionists to chefs to consumers, from the young to the old – to reverse consumption and production patterns and really show the pluses of pulses.

The interview was conducted by Silvia Richter