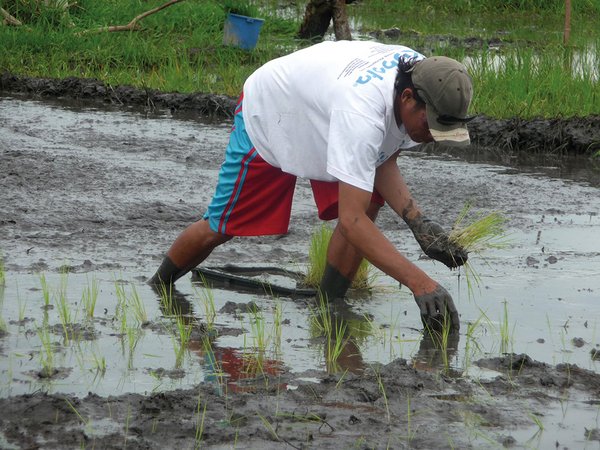 Smallholders constitute the vast majority of rice producers in the Philippines.
Photo: SLE

In view of the expected trade liberalisation in the ASEAN countries in 2017, reducing barriers of market access and strengthening the market position of local smallholders represent important interventions. In Iloilo Province in the Philippines, the Centre for Rural Development of Humboldt University Berlin (SLE) and the International Rice Research Institute (IRRI) have analysed how this can be achieved and how the potential held by urban markets can be tapped.

Rice provides the daily food for the more than 100 million Filipinos, who consume about 114 kg each year. The Philippines has been one of the world’s major importers of rice, filling its food supply gap mostly from neighbouring countries. After being nearly self-sufficient in the eighties, the share of imports has since grown again. In 2010, rice imports amounted to 2.34 million tons, coming mostly from Vietnam and Thailand, which corresponded to ten per cent of the country’s annual consumption requirements.

The rate of growth in rice productivity and the agricultural sector in general has lagged behind much of Asia. Reasons why the country has been unable to meet its demand for rice include the failure of market reforms contributing to the slow growth of rice production. The lack of competitiveness compared to the neighbouring countries is often attributed to the high cost of production, deterioration of irrigation systems, low levels of mechanisation and inefficient marketing. Climate change and vulnerability to drought and heavy rainfall likewise affect crop production.

About 45 per cent of the farm households depend on rice-growing. Smallholder rice farmers continue to play a critical role in producing and in supplying local and national markets with the staple food. They constitute the vast majority of rice producers, cultivating a total of 4.2 million ha annually with small-scale farm holdings usually ranging from 0.5 to 4 ha (national average farm size 2 ha). The smallholders find it difficult to compete with the low-priced rice imports – both in terms of cost (affordability) and quality (requirements of the end-market). Moreover, as a result of the country’s dependency on rice imports, consumer preferences have become biased towards the characteristics of imported rice (mainly coming from Thailand and Vietnam). This is particularly true for urban consumers in port cities, which are more exposed to the world market. Hence, the optimal strategy for upgrading Philippines’ rice value chains will be to strike a balance in investing between cost and quality competitiveness of domestically produced rice.

A study by the Centre for Rural Development identified four types of market linkages in the Philippine’s rice value chain: (1) Sale of rice at the farm-gate; (2) aggregation of un-husked rice; (3) processing / sale of husked rice; (4) distribution and sale of rice to the consumer. The number of actors involved in the chain is significant and typical of “traditional” rice value chains encountered in many Southeast and South Asian countries. Aside from individual farmers, this includes farmer groups/co-operatives, agents who link farmers with trading parties, millers, retailers, wholesalers and traders who may sell unhusked (paddy) and/or husked rice. In general, this leads to a significant level of competition and to profits being split among a large number of actors in the value chain. The National Food Authority (NFA) represents a special case since it acts as a public service provider who is at the same time mandated to stabilise the rice market, involving multiple functions in the value chain (buying, storing, milling and selling).

Several strengths of the rice value chain were apparent, such as well-established market linkages at different levels, including linkages between provinces. Individual (midstream) actors exist who operate in a highly integrated manner, and a range of services are available. However, a number of weaknesses were observed, such as high production costs and inefficient marketing, and market linkages tied to financing arrangements, leading to inflexibility, misconduct and mistrust among value chain actors. Capital constraints faced by producers as well as by midstream actors add to the weaknesses. And there is a lack of vertical co-ordination among actors in the value chain.

… and marketing options of small farmers

Analysing market access of rice farmers requires a comprehensive understanding of the market and its requirements. This is reflected in a multi-dimensional definition of market access, taking into account economic, socio-cultural as well as geographical factors (see top Box). Thus smallholders may differ in their market access according to entrepreneurial skills and knowledge about rice markets, access to drying or storage facilities or their ability to conclude favourable market arrangements with midstream and downstream actors such as traders, millers or retailers. In this context, four degrees of market orientation were identified (see Box below). 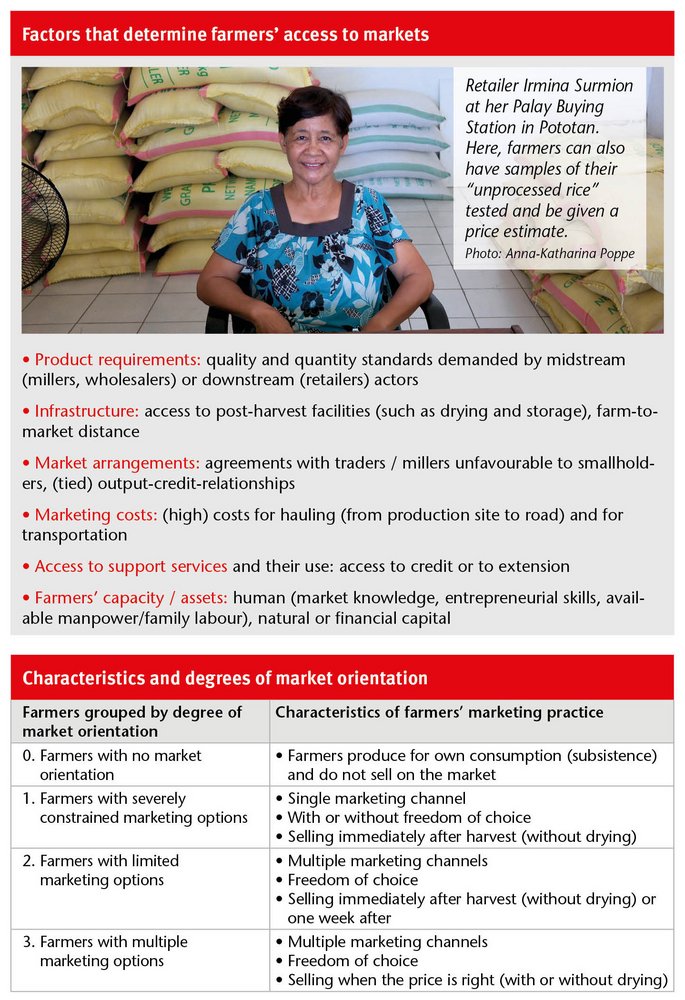 The findings from Iloilo Province also show that there are several similarities among groups of farmers differing in their market orientation: heavy reliance on hired labour for production, use of informal information channels, importance of social networks, existence of multiple income sources and engagement in rice processing for the purpose of own consumption. However, differences among farmers varying in their degree of market orientation are important to be able to identify bottlenecks and the respective entry points for interventions. These relate to the type of production financing, degree of dependencies and access to post-harvest facilities and farm machinery as well as to the levels of market-related knowledge. The Box below shows three examples of farmers’ different degrees of marketing options. The example of Maria of Sta. Barbara shows that assets like a hand-tractor and a water buffalo, along with options for different loan sources, open up possibilities to choose a buyer based on price considerations, giving Maria an advantage over Fernando of Pototan, a farmer depending fully on financing production based on loans. Smallholders with severely constrained marketing options are obliged to sell immediately after harvest, often to a predetermined buyer. 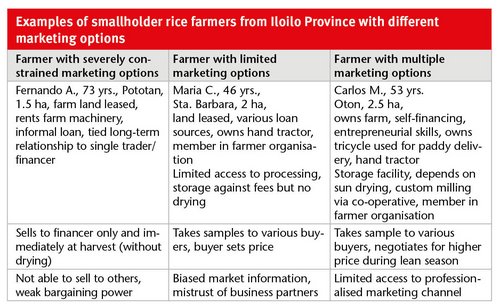 As shown by the case of Carlos of Oton, a farmer who owns his farm land and has possibilities of self-financing, drying and storing and dealing with multiple trading partners will be able to determine the selling time of his rice. Selling time has been found to be key to achieving good farm gate prices. Farmers like Carlos, who are able to sell when the price is right, achieve the highest price (avg. 17.8 PHP/kg). Selling one week after harvest already mostly raised the price significantly, whereas selling of rice at harvest resulted in a low price (avg. 16.2 PHP/kg). Farmers with limited marketing options could experience the entire range of selling prices, depending on whether selling takes place immediately after harvest or with a delay.

Smallholder rice producers were found to differ significantly in their asset endowment and capacities as well as in terms of constraints faced and their needs for improving market access. Moreover, farm households were found to pursue different livelihood strategies, leading to differences in their strategies of producing and of marketing rice. A critical factor across farming communities and rice producers is access to drying and, to some extent, to storage facilities. Both are important pre-conditions to strengthen the bargaining power of smallholders. Aside from marketing constraints, the limited availability and distribution of irrigation water, together with increasing uncertainty of rainfall due to climate change, has proven to be a limiting factor for the market position of smallholders.

As a result of analysing the bottlenecks and market-related needs, five intervention areas emerged which are considered important for improving market access of smallholders:

Improving access to financial capital: Weakening of financial dependencies and increasing access to working capital are important steps in breaking the tied output-credit relationships. Inclusion of smallholders can be improved by adapting financial products to the needs of farmers, by information and by strengthening the bankability of farmers through capacity building.

Expanding access to post-harvest facilities: Improving access to drying and storage is particularly important for rice farmers to further their market engagement in downstream value-adding steps and to improve their market position. Here, the service delivery of farmer organisations can play an important role.

Improving market linkages of smallholder farmers: In addition to reducing economic dependencies from rice aside from diversified livelihoods, the strengthening of market linkages, for example by reducing transaction costs or by increasing rice quality via farmer co-operatives, will help farmers to enhance their marketing power, more systematically utilise their market potentials and connect to more profitable and formalised markets. Owing to small farm sizes, rice production is highly fragmented, and in order to achieve economies of scale, millers need to aggregate paddy rice from various sources with varying quality levels and varietal composition. As a result, incentives for the provision of quality – in terms of price premiums – are not transmitted to farmers. Better horizontal co-ordination among farmers – through farmer co-operatives – may help them consolidate production volumes of consistent quality and get rewarded for their efforts.

Enhancing access to market information: Increased transparency and access to timely, accurate and reliable information on prices and demand as well as on weather forecasts will improve decision-making at farm level for example through functional information systems and structured knowledge exchange of farmers, and by enhancing their entrepreneurial skills through quality agricultural extension services.

Strengthening the physical infrastructure: Improving reliable access to irrigation water by rehabilitation of existing and construction of new facilities is an important pre-condition in the Philippines to improve competitiveness of rice producers and to increase national rice production.

Urban consumption zones provide important market opportunities for rice farmers to tap into if they manage to get the quality right. Understanding urban consumer preferences is a pre-condition for improving farmers’ access to urban markets. Rice produced in Iloilo province is distributed in the different parts of the country, such as Cebu City, the major urban zone in Visayas, Davao City, the major urban zone in Mindanao, and Metro Manila, the country’s capital city. A consumer study was conducted by IRRI in 2013 to look at rice preferences of urban consumers in these cities. With simultaneous exposure to imported rice, consumers in the three cities opt more for fragrant, soft, and white rice – characteristics of imported Jasmine rice. Additionally, the majority of consumers (71 %) in the cities surveyed prefer fragrant rice. These trends indicate a broad market segment for soft and fragrant rice, with shared preference across cities and socio-economic classes (see Boxes). 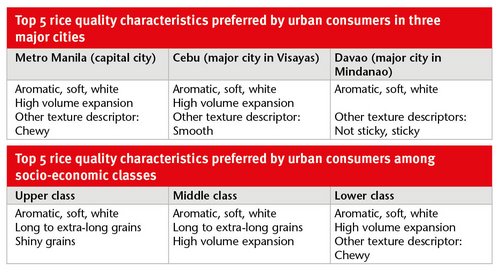 Thailand, as a market leader in exporting high-quality fragrant Jasmine rice, and Vietnam, as a second-mover, have influenced consumer preferences in importing countries like the Philippines. Across socio-economic classes, preferences reveal some degree of segmentation. Firstly, urban consumers in the upper and middle class tend to seek long to extra-long grains. Secondly, consumers in the middle and lower socio-economic classes go for rice with high volume expansion as it can be seen as an economical way of feeding a large family. High volume expansion is also a characteristic of aged/stored rice (imported rice).