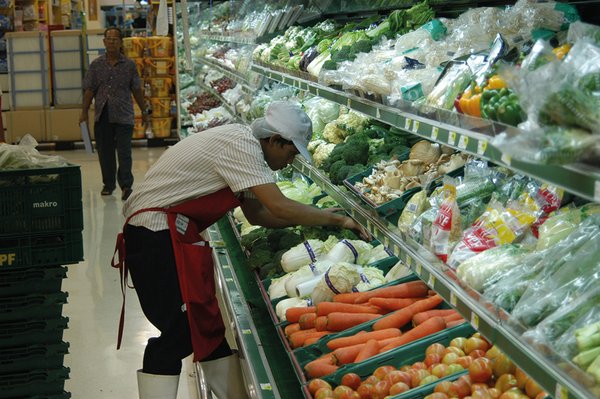 Large supermarkets usually bring their own set of private standards and modern management practices when they set up business in another country.
Photo: FAO/Dan White

Small farmers, big retailers – How to link smallholders to supermarkets

The last three decades have shown that the rash diffusion of formal modes of retailing into developing countries has threatened the livelihood of many smallholders who fail to adapt to retailers’ standards. Although “supermarketisation” has given rise to a wide range of positive outcomes, the huge number of domestic suppliers who could not adapt to buyers’ demands of quantity and quality tend to be left behind. However, adequate support from development co-operation and governments could also enable small-scale farmers to take advantage of the benefits offered by supermarketisation in terms of inclusive economic growth.

The modernisation of retailing in developing economies is a young phenomenon. Thomas Reardon of Michigan State University identified four waves of “supermarketisation”: beginning in the early 1990s in South America and East Asia, followed by a mid-1990s expansion in most of Southeast Asia and parts of Central America, followed by a third wave in the early 2000s in China, eastern Europe / Russia and, finally, a fourth wave in the late 2000s in South Asia, sub-Saharan Africa and poorer countries of southeast Asia. Reardon identified several reasons behind this phenomenon, including decreasing profits in home markets of international retail chains coupled with the economic boom in emerging economies. Other authors argued that urbanisation and improvements in infrastructure in developing countries, the conglomeration of international tastes and the rise of a middle class with more spending power were among the reasons behind the decision of international retailers to venture into developing economies.

Retailing in developing countries is usually characterised by traditional “wet” markets commonly supplied to by small-scale farmers. However, the nature of traditional retailing and traditional agricultural value chains means that consumers are left not only with limited produce diversity but also recurring health concerns over food safety and quality. The lack of food safety and quality standards leaves conscious consumers with little to no information on the practices involved in crop production, particularly on chemical use, labour and hiring practices, whether the crop was produced with the least environmental impact, where the crop was grown and whether farmers received a fair price for their produce.

Such issues are not uncommon to modern retailers. In fact, large supermarkets usually bring their own set of private standards and modern management practices when they set up business in another country. As such, the host country tends to benefit from retail modernisation in a variety of ways. For smallholders, integration into the supermarkets’ value chain, concentration and technological learning tend to lead to higher incomes. Market assurance will encourage farmers to make farm investments that lead to higher and better outputs. The establishment of supermarkets themselves offers formal employment to an extra labour force that could not be absorbed in on-farm activities. While big retailers may have their own standards and management practices in place, what is usually missing when they expand into another country is agrifood supply chains. For this reason, initially, most of the fresh produce offered by retailers is imported from the retailers’ home country or from preferred suppliers world-wide. Over time, local sourcing should increase, but until then, smallholder farmers would have to be excluded.

… often only come for the big chains

Large retail chains usually demand very high minimum volumes of produce that comply with the supermarkets’ private standards, bought for a pre-agreed price. Many domestic growers are unlikely to meet these demands because of small landholdings, lack of inputs, lack of knowledge on good agricultural practices and low harvest volumes. Owing to weak enforcement mechanisms, contract farming under a pre-agreed price remains risky and unpopular, even for most high-value crops. Survey results from a 2014 German Development Institute (DIE) study on retail liberalisation in Andra Pradesh/India show that large farms were found to be better able to supply retail chains as it appears to be easier for them to change production practices in order to comply with demands. Large retail chains were also found to prefer to buy from large farms because of the reduced transaction costs involved in negotiating with larger units. However, in India, large domestic retailers such as Reliance and Heritage were observed to relax this policy in order to have agrifood in their portfolio by any means, as land is highly fragmented in this country. Both supermarkets had to lower their fresh produce standards into simple “size” and “colour” categorisation in order to be able to purchase fresh produce from local farmers. High transaction costs of dealing with each grower were unwanted but could not be avoided.

That smallholders are left behind in the retail modernisation process is bad for the host country because it is missing out on an excellent opportunity for inclusive economic growth. Retailers also suffer because dependency on agrifood imports impacts the stability of supplies, creates insecurity due to currency risks, and bears negatively on their local image and credibility. The logical solution would be to upgrade traditional smallholder production capacities such that they could supply to supermarkets. However, evidence shows that the upgrading of production capacities of large numbers of traditional smallholders, even if it is assisted, is extremely difficult. For example, a couple of years ago, Massmart, one of South Africa’s biggest wholesale and retail companies, together with Technoserv, a non-profit organisation, attempted to train around 100 poor farmers who had never supplied supermarkets before. By providing loans to finance the purchase of seeds, fertilisers, pesticides, labour, electricity, packaging and transport, the objective is to transform the farmers into Massmart’s main suppliers of fresh produce after a three-year period. Farmers benefited from the support they received during the crop growing trials and from Massmart’s purchase of their produce. They were taught financial recordkeeping that allowed them to access formal bank loans. The construction of packhouses meant easier market access for all participating smallholders. However, the high quality of fresh produce standards set by Massmart meant that most of the farmers’ produce was rejected. As part of the agreement, Massmart paid low prices to farmers, which resulted in many of them going into debt. Some farmers resorted to selling the fresh produce to other buyers, which led to disputes because the production was being subsidised by Massmart. At the end of the project, only four of the original 100 farmers ended up supplying Massmart, and in addition, the company had to write off the debts incurred by most of the participants. The experience of Massmart shows how huge the challenge is to upgrade traditional farmers and integrate them into modern value chains. Post-project evaluation by Technoserv estimates that even with intensive coaching, a minimum of five years is necessary to allow farmers to adapt to and comply with modern retailers’ standards.

What development co-operation can do

Supermarkets, however, are not inclined to wait this long and will continue with international expansion whether smallholders are ready or not. Fortunately, developing country governments have a lot of freedom in shaping the supermarketisation process. What are the policy options for developing countries? Altenburg et al. (2016) reviewed several policy options for developing country governments that would allow retail modernisation to be more inclusive for domestic suppliers. A sequenced and assisted approach where retail sectors gradually open while governments assist domestic producers in coping with structural change seems to be promising. Here, governments are encouraged to capture the benefits of the entry of retail chains into the economy while supporting local suppliers in adapting to change. However, since no comprehensive strategy of this type has been found anywhere, development agencies are encouraged to provide support and guidance in this regard. Three possible strategies have been identified for donors and development agencies’ engagement in developing countries. These strategies could be used independently or in combination:

1) Create and implement an integrated impact assessment framework for retail modernisation that combines market and profitability assessments with development criteria. This framework is best developed through a multi-stakeholder approach, for example, involving government, research institutions, donors and retailers. 2) Provide evidence of successful and failed retail modernisation policies, specifically of policy options for governments and donors, their impacts, and design of public-private partnerships between governments and international retailers, and 3) Act as facilitators and brokers in multi-stakeholder processes. Pockets of successful examples of donor and private sector engagement in the upgrading of the capacity of smallholders to adapt to and comply with supermarkets’ standards are available. In Russia, for example, the United Nations Industrial Development Organisation (UNIDO), in partnership with Metro Cash and Carry, supported local fresh produce suppliers to comply with the requirements of the food safety certification schemes recognised by the Food Safety Global Initiative. In South Africa, USAID, in partnership with Pick n Pay, trained small producers of squash and sweet corn in farming, processing and delivery modes. In Bangladesh, the UK’s Department for International Development (DFID), in partnership with Agora Stores, set up a supplier development programme for small and medium-sized fresh produce suppliers. Evidently, such interventions are unique, one-off co-operation projects designed for specific crops, specific farmers, specific value chain nodes or specific supermarkets.

How governments can help

Although local sourcing is in the retailers’ interest, retailers are unlikely to invest towards inclusive value chain development owing to the threat of failure, as the Massmart example shows. Locally, government agencies have a lot of freedom in supporting farmers in upgrading production and being included in modern value chains through various policies and mechanisms. For example, encouraging farmers to convert or include high value crops in their portfolios complements most labour-intensive traditional agricultural practices. The rise in consciousness among consumers makes it promising for governments to assist farmers in developing organic or fair-labelled brands. In both cases, governments could support farmers by financing or training schemes that lead to organic or fair trade or regional labelling. Since retailers tend to avoid negotiating with numerous smallholders, organising farmers into farmer groups and co-operatives would reduce the number of suppliers involved in the discussions. This would lower transaction costs and persuade supermarkets to link up with smallholders. While compliance with retailers’ private standards remains a huge challenge, slowly introducing the benefits of good agricultural practices is a first step. Governments could also provide financial and technical support to farmers who are in the process of certification or assist farmers’ groups with being jointly certified. Finally, involving farmers in specific stages of the post-harvest process such as washing, sorting, cutting and packaging may help increase their share of profits. Governments could support this by providing necessary capacity building for farmers and by subsidising investments in machinery for communities.