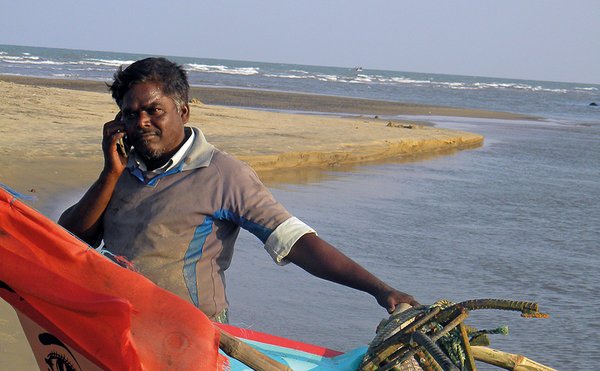 A fishermen from Velankanni uses his mobile phone to check weather conditions before entering the sea.
Photo: S. Balasubramanian

Sailing out to sea in the morning and returning without a catch in the evening is now a thing of the past for many Indian fishermen. A satellite-based information system shows where they can find rich fishing grounds.

It’s 5 pm in the village of Velankanni in the southern state of Tamilnadu. Arumugam Nagaraj prepares his boat for fishing in the sea. He casually looks at his smart phone and checks the GPS location to find his way to fishes. Confidently, he steps into his boat, ready to catch fish for the day.

Like Arumugam, about seven million people spread across the 8,100 km coastline in India depend on fishing for their livelihood. In the past few years, unpredictable weather patterns and non-availability of fish in the usually available locations has, however, raised questions on the future of fishermen’s livelihood. Nagapattinam district, where Arumugam lives, faced the serious wrath of tsunami in 2004. “Since the tsunami devastated this coastal region, the fish catch and availability has changed, and so have the wind movements,” says Arumugam. “We used to go long distances into the sea, only to come back empty-handed. Today, with the ‘potential fishing zone’ advisory, we know the GPS location of the places where fishes can be found.”

What fishermen say
“PFZ advisory has changed the way we catch fish. We used to go to the fishing locations, using time-consuming old practices to find fish. Not only did we lose time, but we wasted fuel and were not even sure if we were going to find fish. Then I came to know of PFZ advisory and used the audio message to find the fishing location. Following the GPS points in the PFZ, I caught fish worth Rs 80,000 at one time.”
Kutti Andi, a fisherman from Nagore, Tamilnadu

The science behind PFZ

Scientists from government research institutes on Earth Sciences, Space and Fishery Sciences collaborated to bring a unique fishery service called Potential Fishing Zone (PFZ) advisories in the 1990s. A potential fishing zone is identified on the basis of sea surface temperature (SST) and chlorophyll concentration. “This information, which is received through satellite, indicates us where fish aggregation happens,” says Nagaraja Kumar, a scientist at the Indian National Centre for Ocean Information Services (INCOIS). “The fishes need food to survive, and to find it, they will come to places where there is chlorophyll concentration.” The Centre provides the advisory for the fishermen on a daily basis to 586 fish landing centres in 14 states along the Indian coast at no cost. A hundred thousand fishermen have been using this advisory until now. The information is given throughout the year except during the marine fishing ban imposed by the Government of India. The ban was for 45 days last year, but this year it has been increased to 61 days. The time of the ban varies across the East and West Coast of India. Says Nimit Kumar from INCOIS, “On the basis of monsoon observations, it has been found that the fish breeding season coincides with the south west monsoon period, when the ocean condition is hostile.” A fishing ban is imposed because of bad weather conditions and to conserve fish species during breeding time. The forecasts are not given during adverse conditions like cyclones, high waves, tsunamis, etc. either.

What fishermen say
“I used PFZ on few occasions, and it is 80 per cent accurate. Once I got fishes worth Rs 75,000 in a single day, which helped me pay my debts. With scientific awareness, we are confident of catching fishes. Also, with additional information like wind speed and weather conditions, we know what to expect when we go to the ocean.”
Arumugam Nagaraj, a fisherman from Velankanni, Tamilnadu

The advisories are in the form of PFZ maps and text with details on direction, distance, depth, latitude and longitude, and GPS location of the place where fishes could be found. Due to the changing nature of the ocean, the fishing zones identified on the maps could shift from the marked location. Hence, to guide the fishermen on the probable shifts in PFZ, information on wind speed and direction is incorporated in the PFZ maps. This information helps the fishermen in locating the PFZ identified in the maps, even if they reach it a day later. This information is not different from what is used in traditional ways of finding fish. A study on satellite-based PFZ in Tamilnadu and the Union Territory of Puducherry indicated that fishermen who used this information correlated their traditional knowledge with scientific data. For instance, fishermen traditionally use natural indicators such as water colour, wind speed and direction, tidal fluctuations and bird aggregation.

PFZ advisories were found more beneficial to artisanal, motorised and small mechanised sector fishermen engaged in pelagic fishing than to activities such as ring seining, gill netting etc. Typically, the information given on pelagic fishes is traced through chlorophyll concentration via satellite. These fishes are found in upper water levels. Satellite information will only be available as far as light penetrates the ocean, which is where pelagic fishes live.

INCOIS has partnered with NGOs, industry, government and private organisations to disseminate the satellite data to fishermen. For instance, the MS Swaminathan Research Foundation (MSSRF), one of INCOIS’ partners, downloads real time information from the INCOIS website and converts the data into content for easy use by fishermen. The information is given through their Village Knowledge Centres and Village Resource Centres. “We get information for today and tomorrow at major fish landing centres, and this is given in the native language and local measurements the fisherman understand,” says S. Velvizhi, a scientist at the MSSRF. Nagaraja adds: “Initially, fishermen were reluctant to accept the technology, but over time, we succeeded. This happened with the support of NGOs, who made this information available to fishermen on the ground.”

What fishermen say
“On a single trip, I spend ten days for deep-sea fishing. I take 2,000 litres of diesel, and one trip will cost me 1,000 litres. Before using the PFZ advisory, we went to the same location twice if we didn’t find anything, spending more fuel and time. Now, I save ten hours of time and almost 100 litres of diesel since I know where the fishes are, and I take my boat directly to the place.”
Rajkumar Selvaraj, a fisherman from Nagapattinam, Tamilnadu

The information is given through diverse information, communication and technology (ICT) tools including a fisheries helpline number, audio messages, community radio, mobile applications, email, electronic display boards, local television networks, newspapers and text messages. In a survey done in 2012, it was found that over 77 per cent of the fishermen across Tamilnadu and Puducherry were receiving PFZ data through mobile-based text messages provided by MSSRF village resource centres. It was also found that information exchange among fishermen played a huge role in sharing PFZ location, which in turn is benefiting the community.

According to Nimit, the most important aspect of this advisory is that it is not about catching more fish, but about catching fishes efficiently, through environmentally responsible ways to reduce the time spent on searching and cutting fuel consumption. All the regions, whether deep sea fishing practised by large trawlers, or fishing close to shores by smaller fishermen are treated as an equal playground. Advisory is given to both these types of fishermen. Says Nimit: “When we give advisory for larger trawlers, they directly move into the ocean, taking the pressure off the coastal regions. This gives room to smaller and traditional fishermen to pursue fishing close to the coast, sufficiently fulfilling their requirement. Also, smaller fishermen now venture further into sea, using catamarans. Considering that only a tenth of fishermen are currently using it, there is no risk of overexploitation.” And Nagaraja adds: “To prevent overexploitation of fishes, we only give information on pelagic fishes, which are found throughout the year. This is given for reasonable locations and productive areas where there is high probability of getting fishes.”

The study done on PFZ users in Tamilnadu and Puducherry in 2012 reveals that 60 per cent of fishermen using trawlers benefited from the information. Small craft fishermen constituted a whopping 40 per cent, indicating that smaller fishermen were making significant use of the PFZ advisories.

PFZ advisory leads to a 30 to 70 per cent reduction in time spent to catch fish, and as a result, this adds to saving fuel and thus reducing carbon emissions. The National Council of Applied Economic Research (NCAER) estimated in December 2010 that annual net economic benefits due to PFZs based on satellite data would be in the range of Rs 340 billion to Rs 500 billion.
Over a decade, fishermen, who have taken technology in their hands, have witnessed a change after using PFZ advisory. It has not just made their livelihood more reliable, but has also contributed to savings in time, reducing fuel consumption, higher income, and preventing themselves from venturing into the sea in adverse conditions.