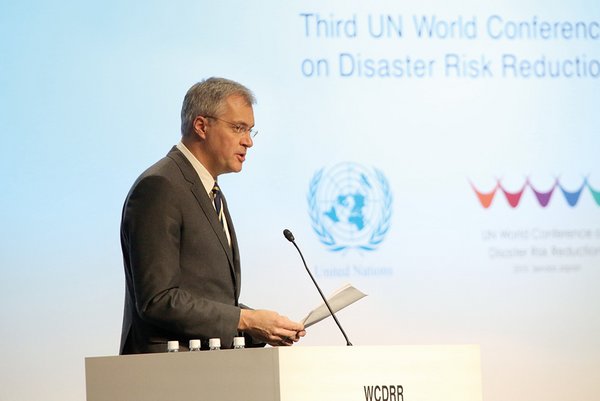 Dominique Burgeon, speaking here at the Third UN World Conference on Disaster Risk Reduction in Sendai, Japan, in March 2015, is Director of the Emergency and Rehabilitation Division of the United Nations Food and Agriculture Organization.
Photo: FAO

In the summer of 2014, the UN Food and Agriculture Organization (FAO) launched a programme in response to the Ebola disease outbreak in West Africa. We asked Dominique Burgeon, Director of the FAO Emergency and Rehabilitation Division, about initial results.

Rural 21: Mr Burgeon, have the fears over the impact that the Ebola outbreak has had on food security in the region materialised?
Dominique Burgeon: FAO, together with WFP and governments of the region, conducted a rapid assessment of the impact that the Ebola Virus Disease (EVD) outbreak has had on agriculture and food security in the three hardest-hit countries. The findings of the rapid assessment indicated that the EVD outbreak resulted in a serious shock to the agriculture and food sectors. Lack of access to food caused by the outbreak’s impact on household incomes has had the most negative effect on food security. In the areas affected, markets, agricultural and livestock sectors and sources of income such as agricultural labour, small shops and hunting and selling bushmeat have suffered most from Ebola. In Guinea and Sierra Leone, price levels are similar to those of a normal year. In Liberia, rice prices are higher than usual. Trade activities have declined significantly in all three countries, particularly in quarantined districts.

The outbreak of EVD in the major production and transhumance areas has resulted in the closure of borders and livestock markets and confinement of goods and persons. All these factors have led to a decline in the purchasing power of the stakeholders in the agriculture sector and a drop in sales of livestock products (eggs, meat, manure, etc.), with a negative impact on farmers’ income.

According to this assessment, crop production in Guinea has dropped sharply, particularly in affected areas. National rice production, the main food staple for Guinea’s population, fell by four per cent in 2014. Production has been affected by the drop in agricultural exports. For example, potato exports to Senegal fell by 91 per cent from August 2013 to August 2014.

In Liberia, the epidemic has severely depressed production in the agriculture and forestry sector, which accounts for about one quarter of GDP and half of the country’s workforce. In November 2014, about 630,000 people, or 14 per cent of the population, were estimated to be severely food insecure, with the EVD impacts accounting for 170,000 people. The disruption of agricultural activity reduced the supply of agricultural commodities and substantially increased their prices. The prices of rice and cassava increased by 41 and 63 per cent respectively.

The agricultural sector in Sierra Leone, which accounts for around 41 per cent of GDP, was also hit by the epidemic. About 450,000 people, or 7.5 per cent of the population, are estimated to be severely food insecure as of December 2014. Aggregate food crop production decreased by five per cent compared to production in 2013.

The FAO launched its Regional Response Programme in summer 2014; 90,000 households that are affected or at risk are to benefit from the measure. Can you already draw an initial balance?
Thanks to the funds received, FAO has provided assistance to 36,000 households in Guinea, Liberia and Sierra Leone. Crucial activities comprise community campaigns to help stop the spread of the disease and increase understanding and awareness among affected and at-risk populations, including rural communities who rely on bushmeat as a source of livelihood and food; strengthening savings and loan schemes, particularly those involving women; and the provision of in-kind or financial support to vulnerable households to safeguard livelihoods and incomes.

How have the activities related to the provision of bushmeat alternative gone down with the population? What is your long-term forecast for success?
The FAO multidisciplinary mission to Guinea in November 2014 highlighted the progressive implementation of adaptation strategies to withstand the loss of income caused by the ban on selling bushmeat and the seizures that went with it. Some women who usually make a living from trading meat have been able to convert to selling other products such as dried fish, or market gardening. These alternative strategies to bushmeat are adapted to the local context and seem to be accepted by the rural population. They therefore have every chance of being successful.

Setting up safety nets is a long-term objective. Where do you think it poses the biggest challenges?
One important challenge is likely to be that of strengthening the governments’ institutional and administrative capacity to design and manage effective safety nets for the most vulnerable segments of the population in the region. This will not be easy because the Ebola epidemic overwhelmed the institutions and public sectors of Guinea, Liberia and Sierra Leone.

Another challenge connected to governance will consist of securing funds to set up and maintain national safety nets. This could be problematic as the economies of the three countries are still struggling to get back on track. In the first stage of recovery, donor assistance will be critical in meeting governments’ financial gaps.

Governments will also face the challenge to define target populations. When a big portion of the population is below the poverty line, and the differences in income among poor households are minimal, there will be a need for cost-effective and easy-to-implement methods to identify the poorest and most food-insecure households.

The provision of assistance could be further complicated by the inaccessibility of those rural areas poorly served by the road network. During the rainy season, the roads that provide access to these places regularly become impassable.

FAO is ready to assist the governments in the region especially with regard to the design of safety nets targeting the subsistence farmers still facing the negative repercussions of the agricultural shortfalls caused by the Ebola outbreak.

One of the items in the Response Programme is the strengthening of co-ordination at regional and national level. What has been achieved in this area?
FAO played an important co-ordinating role at subregional level, particularly through the formulation of a regional Ebola response programme, food security monitoring and participation in surveys and analyses within the countries, resource mobilisation and technical support, and co-ordination with regional humanitarian partners based in Dakar, Senegal.

At national level, interagency co-ordination was key to responding to the epidemic and materialised through the establishment of UNMEER, the UN Mission for Ebola Emergency Response. In the area of food security, FAO and the World Food Program co-ordinated their efforts to respond to the negative impact of the disease on the agricultural sector and on food security. FAO co-operated with other UN agencies and government institutions in the frame of social mobilisation, training and awareness raising activities, using FAO networks of extension services and animal health workers.

What options are there to link rehabilitation and development?
The FAO approach is to build resilience and capacity of vulnerable households, families and communities and systems to face the adverse impact of Ebola and other emerging crises as well as to recover and adapt in a sustainable manner. This can be done by ensuring pro-poor growth through investments in social protection programmes and establishing a long-term risk reduction strategy that reduces vulnerability and builds the resilience of communities to future outbreaks.

How can the population’s resilience be strengthened in the medium and above all in the long term?
Strengthening the resilience of poor rural households and their livelihoods to Ebola and other disease shocks requires enhancing the capacity of the rural poor to manage the risks they face and lowering their level of exposure and vulnerability. Designing strategies to increase resilience may include the following actions:

FAO estimated a total of 30 million US dollars for the Regional Response Programme. Has this money been raised?
Given the adverse impact of EVD outbreak on the agricultural and livestock sectors and food security and the livelihood conditions of the affected population, in January 2015, FAO revised the funding requirements in order to scale up response activities in the most affected and at-risk countries and appealed for a total of 42.5 million USD to provide direct assistance to 170,000 vulnerable households in Guinea, Liberia and Sierra Leone and at-risk countries.

So far, FAO has been able to mobilise resources for a total amount of nearly 11.9 million US dollars (equivalent to 28 per cent of the appealed amount). In addition to this funding, FAO has received the support of the United States Agency for International Development under the Emerging Pandemic Threats (EPT-2) and Global Health Security Agenda (GHSA) global programme to conduct studies in twelve countries in East, West and Central Africa to identify potential carriers of Ebola and Ebola-like viruses, and shed light on the possible role of livestock, if any, in transmitting the disease. The programme supports a great amount of capacity building in laboratory diagnostics, surveillance and value chains analysis, and helps countries develop risk mitigation strategies.