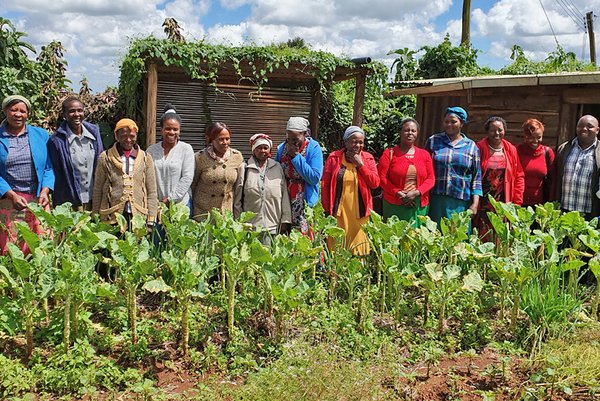 Some of the women farmers from Murang’a County who participated in the Focus Group Discussions, together with the discussion facilitators and the Nutrition Officer from Kigumo Sub-County.
Photo: Irene Kadzere

Nutrition and health: farming women in Kenya’s Murang’a speak out

As a rule, women play a major role in determining household dietary practices and nutrition. In agricultural rural areas, they are actively involved in food production as well, and thus also play a crucial role in terms of food availability. But what are the factors determining the dietary practices which women opt for? And is it important whether they engage in organic or conventional farming?

Kenya is among the triple burden global  hotspots for malnutrition given its high levels of childhood stunting, anaemia and the growing problem of overweight in adult women (Global Nutrition Report, 2018). While women are a vulnerable group nutritionally, they are long known to play a major role in determining family/household dietary practices and nutrition in both rural and urban settings of Kenya. In agricultural rural areas, they are directly involved in family food production and in making choices and decisions on food procurement and preparation for their families. Organic agriculture has been gaining importance among women and men farmers in Kenya, but there is scarce information on the role that organic farming plays regarding transformative sustainable nutritional practices, decisions, and fulfilment of healthier and safer diets among smallholder farming families in Kenya. A project on dietary diversity and nutrition (see Box at the end of the article) takes a look at these aspects.

In the course of the project, we held Focus Group Discussions (FGDs) in December 2019 with farming women ‘perceived’ as practising organic farming though not being certified (herein referred to as organic) and conventional farming women (3 groups with 12-15 farmers each for each category) from Murang’a County in Kenya. Subsequently, individual interviews were conducted with a selection of farmers from the county. The objective was to understand the prevailing situation regarding household nutrition (food types and sources, roles of women and some decision-making processes), perceptions on nutrition – the health/food safety – agriculture nexus, and information needs related to nutrition and health.

Overview of findings in relation to human nutrition and health

Organic or conventional. The women farmers were first of all asked why they practised organic or conventional farming. Clear differences emerged regarding the reasons, which we clustered as “health risks”, “production related reasons”, “status quo and knowledge of alternative farming practices”, “environmental protection” and “marketing prospects”. They are given in the Table. 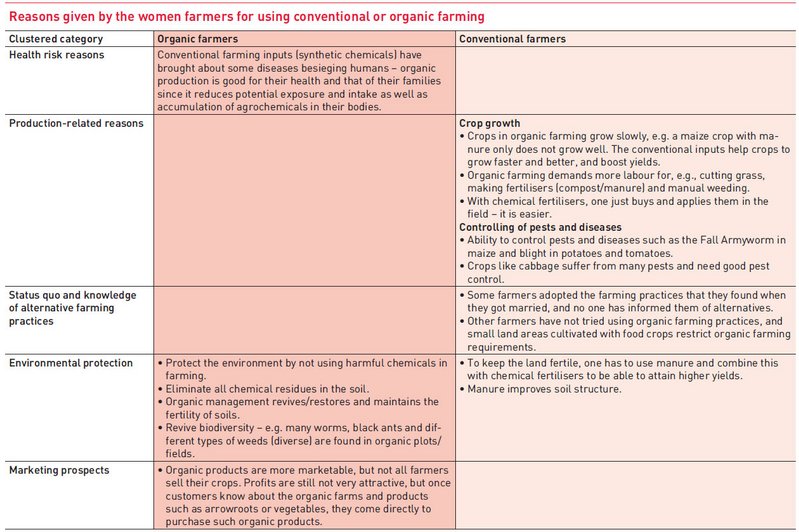 Food production and purchase. As to the important types of household food crops (excluding tea) and livestock spontaneously mentioned in their top ten lists, there were no striking differences between the organic and conventional farmers. Maize was the most important cereal food crop followed by cabbage, common beans, and kales (other than cabbage). The top three types of livestock reared for food and income were cattle, chickens and goats/sheep. The top ten foods most purchased by both organic and conventional farmers could be categorised into legumes, vegetables, tubers, fruits, cereals, oils, sweeteners, condiments, beverages and meats.

Most nutritious foods and terms mentioned to define human nutrition. Foods perceived spontaneously as the most nutritious for women were from the following food groups: legumes (e.g. black beans, pigeon peas, groundnuts), vegetables (including some traditional ones such as amaranthus, pumpkin leaves and African nightshades), tubers (e.g. arrowroots, sweet potatoes, yams, cassava), fruits (e.g. cooking and dessert bananas, avocadoes, apples, oranges) and cereals (e.g. unrefined maize flour and mixed flours porridge). Although among the most purchased, meat (and other animal products) was, surprisingly, not frequently mentioned spontaneously. The organic and conventional farmers used more or less similar terms to define human nutrition, except that organic farmers also mentioned ‘foods that do not contain chemicals’. The term ‘balanced diet’, with or without a specification of nutrients such as carbohydrates, proteins, vitamins, etc., was mentioned by all the groups. Other terms used referred to energy-giving food, health and/or disease resistance, consumption habits, food utilisation and good body growth.

Priority to food consumption in the household. All the organic and conventional groups indicated that women had the primary responsibility to prepare and share food in a household. In cases where the women were sick, the men could prepare the food. On the other hand, women had the lowest priority when it came to serving food, giving their husbands and children, respectively, higher priority except when guests were present, in which case they would be served before the husbands and children. This practice has potential implications for nutrition adequacy for the women during periods of hunger, when families do not have enough to serve and/or consume.

Perceptions on food safety, and concerns. The women’s perceptions of a safe food showed some similarities and differences regarding the organic and conventional farmers. Both categories considered own-produced food (or food from organic farming neighbours in the case of the organic category) as the safest, as they could ‘guarantee’ the production, preparation, ingredients/additives, and hygiene practices. However, it is noteworthy that even some conventional farmers perceived foods grown without chemicals to be safer. On the other hand, the conventional farmers also pointed out that the food which they produced using synthetic inputs was safe, too, because they said that after pesticide application, they refrained from harvesting the crops until the required pre-harvest interval period had elapsed. Food that was properly stored, such as maize grain kept in dry conditions, was also considered safer, as this prevented biological contamination, e.g. from aflatoxins. For purchased foods, some farmers often checked for expiry dates as a safety precaution. When it came to the safety of foods produced by other farmers, all groups clearly raised concerns regarding the safety of such foods. Primarily, they all did not trust, i) what (and when) had been applied to the food during production or storage – whether the food was agro-chemical free or contaminated, ii) the hygiene and handling of the food, iii) storage practices, and iv) the risk of undesirable ingredients having been used. Even the conventional farmers were also wary of the potential risk of other producers failing to observe the safe intervals for harvest after spraying.

Perceptions on potential nutrition and health impacts of agriculture. From among a provided list of human diseases, mostly non-communicable, cancer was the most feared in general by both farmer categories during the subsequent individual interviews. Food production practices which were perceived to lead to cancer were avoided by organic farmers – indeed, conversion from conventional to organic was motivated largely by human health concerns. This finding is in line with the increasing incidences of various types of cancers in Kenya, some of which are diet-related, according to Maiyoh and Tuei (2019). Some responses were specific to either farmer category; see the left and right boxes below. Organic farmers mentioned some positive links, while conventional farmers spontaneously referred to negative attributes. In the middle box, the responses that were common among both categories are highlighted, and relate to the strenuous nature of smallholder farming, possible accidents and allergies.

A strong need for information

The focus group discussions and interviews revealed that information on nutrition and health was in high demand among the women farmers. Their questions and information needs can be clustered as follows:

Organic farmers specifically mentioned the need to detoxify chemicals which they believed accumulated in their bodies over the years when they consumed conventionally grown food. Some conventional farmers also wanted to know how to convert to organic farming. It is not surprising that both farmer categories brought up weight control-related information needs. In Kenya, overweight and obesity are increasing, and are driven to a large extent by the transitions and shifts in nutrition from traditional diet patterns high in fibre and micronutrients to westernised diet patterns high in salt, fat (energy dense) and refined carbohydrates, but low in fibre and vital micronutrients.

To sum it up

The interviews revealed that organic and conventional farming women from Murang’a,  Kenya, produce largely similar crops and livestock types and purchase more or less similar types of foods. However, it also became clear that different aspects come to bear in their choice of production modes. Whereas human and environmental health considerations, food safety (chemical-free food) and market prospects appeared to be key motivating factors for organic farming, those among conventional farmers included the need to boost crop yields through use of agrochemicals and synthetic fertilisers while reducing labour inputs into farming. Cancer was the disease most feared by both organic and conventional farming women, and the link between food production practices and health spanned the chain from production to consumption. Furthermore, it was revealed that the women are keen to learn and receive information and training on a wide range of nutrition and health-related topics.

In Murang’a County, the Swiss Research Institute of Organic Agriculture (FiBL) and partners in Kenya such as the Kenya Agricultural & Livestock Research Organization  (KALRO), the International Centre of Insect Physiology and Ecology (icipe) and the Organic Agriculture Centre of Kenya (OACK) have been conducting comparative research on productivity, profitability and sustainability of organic and conventional smallholder farming systems through the Farming Systems Comparison in the Tropics, ProEcoAfrica and Organic Food Systems Africa (OFSA) projects.
More information: systems-comparison.fibl.org; www.proecoafrica.net

Acknowledgements
The authors of this article would like to thank the Focus Group Discussions participants, the enumerators, Marian Kamau and Paul Kiuru – senior scientists from KALRO, David Gathuka Karanja – Programme Manager from OACK, James Karanja and Chrysantus M. Tanga – senior scientists from icipe, Douglas I. Mwangi – a Nutritionist Officer at Kigumo Sub-County of Muranga, Peter O. Mokaya – a Public Health Physician and Development Practitioner from the Organic Consumer Alliance (OCA) in Kenya, and Noah Adamtey – a senior scientist from FiBL for their invaluable contributions to the study. Funding from the Ekhagastiftelsen to undertake the nutrition studies as part of the ongoing SysCom, ProEcoAfrica and OFSA projects is also acknowledged.

Irene Kadzere and Christian Schader are senior scientists at the Swiss Research Institute of Organic Agriculture (FiBL).
Anne W. Muriuki is a senior scientist in the Kenya Agricultural & Livestock Research Organization (KALRO).
Marlene Heeb is a Programme Officer in the Global Programme Health of the Swiss Agency for Development and Cooperation (SDC).
Isabelle Herter-Aeberli is a senior scientist in Human Nutrition at the ETH Zurich Department of Health Sciences and Technology.
Contact: irene.kadzere@fibl.org.