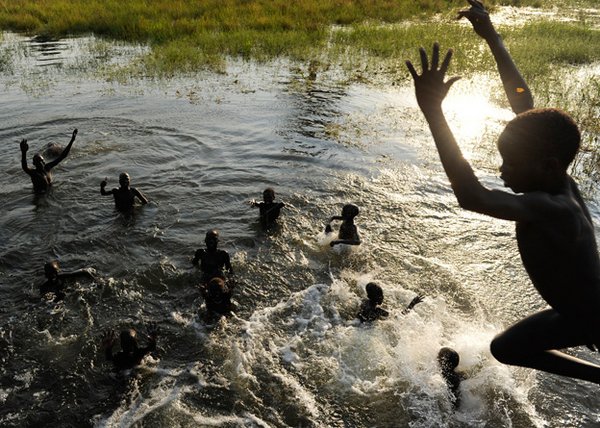 Malaria, schistosomiasis & Co.: The scourge of the “bottom billion“

As a Millennium Development Goal (MDG), the fight against malaria has enjoyed high priority during the last fifteen years both in the countries affected and around the world. Today there are 37 per cent fewer new cases each year than in 2000. In the same period a 60 per cent reduction in the number of deaths has been achieved – thanks to the use of impregnated mosquito nets to prevent infection and to the treatment of sufferers with the combined preparations now commonly available. Despite this, according to figures from the World Health Organization (WHO), of the 214 million people who contract malaria, there are currently still 438,000 deaths every year.

Lymphatic filariasis is also transmitted by mosquitos, but in this case the disease is caused by worms (mainly Wucheria bancroftii). Its larvae block the lymph flow of those infected and causes painful local inflammation. In chronic cases filariasis leads to painful and often grotesque swellings of the limbs, which is why it is also known as elephantiasis. In men the scrotum is often affected as well. People with the disease frequently suffer permanent disability and social exclusion as a result. WHO estimates that approximately 1.23 billion people are currently living in areas where filariasis is rife, 120 million are infected and 40 million suffer from severe disabilities caused by the disease. Yet lymphatic filariasis can be controlled with bed nets and by regular preventive treatment of the whole population (MDA: mass drug administration) with worm medication (such as albendazole). If this treatment is carried out over a number of years the transmission of filariasis can be prevented completely and the disease eliminated. In endemic areas around 33 per cent of the people affected currently receive this preventive therapy on a regular basis.

Onchocerciasis – or river blindness – caused by the threadworm (Onchocerca volvulus) is widespread in 31 countries in Africa, but endemic foci also exist in Latin America. Transmission of the larvae of threadworms from person to person occurs through a bite from a blackfly. This fly breeds in fast-flowing rivers and streams in remote rural areas with fertile agricultural land. After infection takes place, the worm larvae form nodules in the subcutaneous tissue and develop into adult worms. On reaching sexual maturity the adult females produce new larvae, also known as microfilariae, which migrate through the connective tissue and eventually die. The physical symptoms brought on by the infection include severely itchy scaly or thickened skin and inflammation of the eyes which, left untreated, can lead to blindness. Onchocerciasis is tackled by controlling the blackfly and by preventive mass drug administration with the worm medication ivermectin. According to WHO figures, up to 99 million people in endemic countries – mainly in Africa – are now receiving this therapy on a regular basis, with coverage currently at 76 per cent. WHO estimates that this programme prevents around 40,000 cases of onchocerciasis-related sight loss every year. Some Latin American regions have already succeeded in interrupting the transmission of onchocerciasis and eliminating the disease.

In terms of the disease burden, schistosomiasis (bilharziasis) is the most significant tropical disease after malaria. It is caused by infection with blood flukes, worms of the genus Schistosoma, which are transmitted by infected freshwater snails. The water is contaminated by the excretions (faeces and urine) of humans carrying the infection. These parasites penetrate the skin and migrate through the body. The inflammation resulting from Schistosoma eggs mainly damages the intestines and the urogenital system, becomes chronic and is in some cases fatal. Poor hygiene conditions and water-based activities make children particularly vulnerable to infection. Children who have been infected often suffer from malnourishment and therefore frequently lag behind in their physical, intellectual and academic development. A sustained severe attack of schistosomiasis can cause lasting damage such as fibrosis of the liver, bladder cancer and kidney failure. The medication praziquantel is used in mass administration to control schistosomiasis. Figures from WHO show that around 261 million people – mainly in Africa, but also in parts of Asia and Latin America – currently need this preventive treatment on a regular basis; however, only about 14 per cent of these are reached.

These last three conditions are among the so-called neglected tropical diseases (NTDs), the infectious diseases which affect the “bottom billion” in particular: the approximately 1.4 billion people in the world who still have to get by on an income of less than 1.25 dollars per person per day. The World Health Organization includes seventeen quite separate diseases transmissible by bacteria, protozoa, worms and viruses in the NTDs and in 2008 developed a realistic plan to tackle them. The fight against the NTDs gained particular momentum in 2012 as a result of the London Declaration on NTDs. Here the CEOs of 13 drug companies, representatives from governments of countries affected by NTDs, from the United States, the United Kingdom and the Gates Foundation, as well as from the World Bank and WHO, together with numerous other health organisations working all over the world, agreed a common platform to control and, where possible, to eliminate ten NTDs.

At present programmes to tackle NTDs are under way in 74 countries, targeting different diseases according to local epidemiological conditions. The medicines needed for this work are donated to the programmes by the drug companies party to the London Declaration. In 2014 the German Network against Neglected Tropical Diseases (Deutsches Netzwerk gegen vernachlässigte Tropenkrankheiten, DNTDs) was founded by representatives of academia, NGOs and industry. One of its aims is to raise the profile of NTDs in the media, and especially in research and development cooperation. In January 2015 the organisation warned against neglecting the poverty-related diseases and NTDs in the wake of the fight against Ebola.