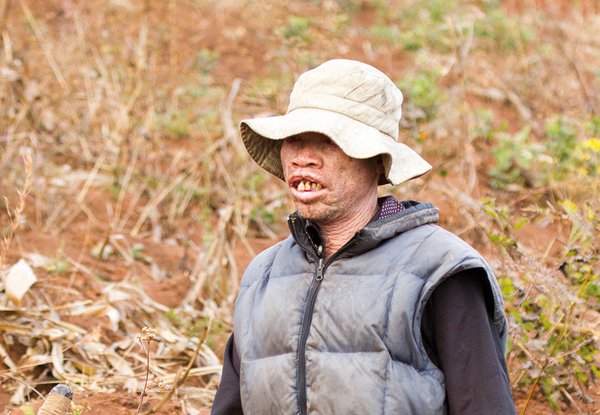 Leave no one behind – mainstreaming disabilities in national public works programmes

The Government of Malawi is supporting inclusive growth by integrating persons with disabilities (PWDs) in its Public Works Programme. A recent pilot showed that including PWDs in such schemes allows them to earn income and contribute to creating community assets. This article presents some lessons learnt in the pilot and makes recommendations on how to include PWDs in national public works schemes.

Persons with disabilities (PWDs) and their families are among those most vulnerable to chronic poverty and social exclusion. According to the Malawi National Policy on Equalisation of Opportunities for Persons with Disabilities (2006), “poverty often causes disability and disability increases poverty”. Therefore, PWDs are among the most worthy recipients of social protection.

However, discrimination and stigma can make it hard, if not impossible, for people with disabilities to participate in social protection programmes. But if these programmes do not reach PWDs, this can exacerbate their disadvantage and trigger further exclusion, compromising long-term poverty reduction and development goals.

Where social protection programmes do reach PWDs in Malawi, cash transfers are the most prevalent form of support. This is based on a simplistic view that PWDs are unable to participate in productive activities and are, therefore, best served with welfare support. However, according to the 2008 Malawi Population Census, a large proportion of PWDs are farmers (72.4 %). This indicates that there is potential for other types of social protection programmes, such as public works, to include PWDs. Including PWDs in public works reflects that they are not only social welfare recipients but can also contribute to the development of their communities.

How does the government include PWDs in its Public Works Programme?

The Government of Malawi, specifically Dedza District Council and Malawi Council for the Handicapped (MACOHA), has implemented a pilot project that systematically included PWDs in its Public Works Programme in five pilot areas in Dedza district in the central region of Malawi. The pilot was conducted from October 2015 to March 2017. In the five areas, a total of 157 PWDs, approximately five per cent of the total number of beneficiaries, participated and still are participating in the Public Works Programme. PWDs are active in the same public works projects as other beneficiaries are. These include the rehabilitation of roads, the planting of trees and vetiver grass, the rehabilitation of gullies and the construction of irrigation schemes.

Running awareness-raising meetings addressing district officers, community extension workers and members of the community about the rationale for and benefits of including PWDs in public works programmes formed a major element of the project. These meetings focused on the messages that “Disability is not Inability” and that PWDs can also contribute to the development of their community. In addition, it was stressed that they have the same rights as everyone else. As it was observed at the beginning of the pilot that PWDs themselves as well as their family members did not believe that PWDs could engage in any physical labour, special sessions were conducted with them. These sessions aimed at changing their mindset about the ability of PWDs to undertake physical labour, but also at giving them the option to nominate a proxy worker in the case of severe disability, such as severe mobility impairment, very strong epilepsy or complete visual impairment. Throughout the pilot, community extension workers supported the process of inclusion of PWDs in the programme.

Further, as part of the design of the pilot, PWDs received regular wages for their work alongside other public works beneficiaries. They were also linked with Community Savings and Investment Promotion (COMSIP) groups, allowing them to save and invest their earnings and acquire skills in order to improve their livelihood. Finally, the pilot suggested options for how to mainstream persons with disabilities in public works programmes.

What was learnt from the pilot?

A recent evaluation of the pilot found that, if given the opportunity, most PWDs are able to contribute effectively to public works programmes and community asset creation. The evaluation indicated that the main participation barrier is access to the programme. Among other reasons, this is because PWDs are not seen as able to undertake physical labour. This view is widely held by district officers, community members and even the PWDs themselves. Another obstacle is long distances to the work place. However, these barriers can be overcome through awareness-raisings, by showcasing to communities that PWDs can conduct physical labour and by ensuring that PWDs are located to projects close to their houses. The evaluation stressed that once these access barriers were overcome, the majority of PWDs did not face major challenges in actually doing the work. This shows that constant awareness raising is needed at all levels to change people’s mindset about PWDs and convince them that ‘disability is not an inability’.

The evaluation also found that once PWDs are enrolled, some flexibility is required regarding the type of work they do, the location of the workplace and the working hours. For example, a person with mobility impairment should be assigned to filling tubes for a nursery rather than constructing roads. For those with severe disabilities, the opportunity of sending a proxy to work on their behalf should be provided. Further, it was found that if transfer levels are adequate and linked to other services, such as COMSIP groups, PWDs working in public works programmes can become more economically empowered and contribute to their households. Apart from buying food, some PWDs participating in the pilot were able to procure livestock and improve their houses.

“We now know that the government considers us useful in community development. By allowing us to work in the public works programme, we now know that government also counts us as important citizens.” (Female beneficiary with a disability, Mtantho Catchment, Dedza District)

Finally, it was shown that levels of discrimination towards PWDs within the community decreased, as community members gained more understanding and appreciation of their contribution. Thus, PWDs have been able to use this programme as a stepping stone to inclusion in wider community processes, including village government structures.

How can the inclusion of persons with disabilities be promoted?

One way of mainstreaming disabilities in public works programmes is to introduce quotas to ensure a minimum level of participation by PWDs. This can allow for inclusion on a large scale and at a low cost, and can be a first step towards changing mindsets. Quotas are best combined with frequent and intensive awareness raising on PWDs during public works meetings at community and district levels to change people’s perception of PWDs from mere recipients of social welfare to productive community members. Mainstreaming can also be supported by integrating questions on PWDs into public works monitoring forms and by collecting disability-disaggregated data. In addition, it is recommended to adapt the national guidelines for public works programmes so that they integrate the different activities that persons with different types of disability are able to do.

With respect to the pilot in Malawi, a special feature was the use of existing government structures to integrate PWDs into public works and finance their wages. This has opened up the possibility of scaling up the pilot to all districts, rather than creating specialised or parallel programmes for PWDs – which is a ‘good practice’ example of inclusive social protection. It is likely that a combination of these options will be required to successfully mainstream PWDs in public works programmes and ensure that they are not left behind.

In sum, the pilot has demonstrated that persons with disabilities can be successfully integrated into productive social protection programmes, which will enable them to earn income and contribute to community asset creation alongside their peers without a disability. PWDs should be rightfully viewed as productive members of the community who can contribute to long-term poverty reduction and development goals.

Social protection describes all public and private initiatives that provide income or consumption transfers to the poor, protect the vulnerable against livelihood risks and enhance the social status and rights of the marginalised, with the overall objective of reducing the economic and social vulnerability of poor, vulnerable and marginalised groups.

Public works programmes (PWPs) usually provide temporary employment for low wages to mainly unskilled workers on labour intensive projects, such as road construction, soil conservation and waste disposal. The main objectives are to provide income security to the most vulnerable, while at the same time developing public infrastructure and assets that promote social and economic development. They are often implemented in response to a crisis or as part of a long-term, counter-cyclical employment strategy.