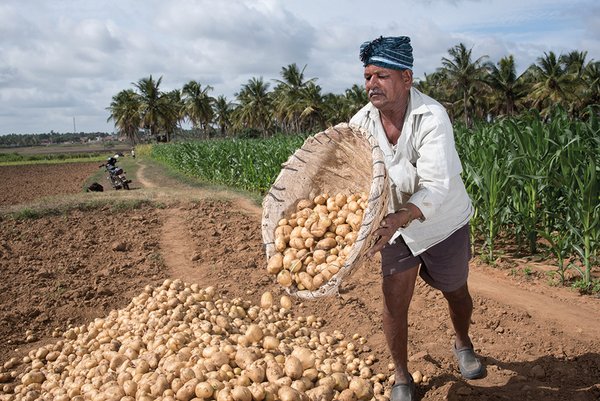 Different countries, different needs but the same challenges – creating synergies is key to addressing common problems in order to improve the current situation. This also applies to the Green innovation centres for the agricultural and food sector run under the One World – No Hunger initiative. Taking the potato value chain as an example, our author demonstrates how exchange can be supported and mutual learning can be achieved.

The Green innovation centres for the agricultural and food sector are a focal area of the One World – No Hunger initiative run by the German Federal Ministry for Economic Cooperation and Development (BMZ). In seven of the countries participating in the initiative, Deutsche Gesellschaft für Internationale Zusammenarbeit (GIZ) is currently concentrating on the potato value chain. All of these projects deal with innovative measures to increase yield, generate employment in the sector and diversify the local food supply. In 2015, the working group on potatoes was founded to establish knowledge transfer and co-operation among the participating countries, including Germany (see Box at the end of the article).

Why potatoes? Extensively produced in the highlands of Africa and India, with a low level of irrigation or mechanisation for soil preparation, planting and harvesting, the potato is a high input and low output crop under current practices. Thus, potato production is becoming a less and less attractive source of income for young generations. 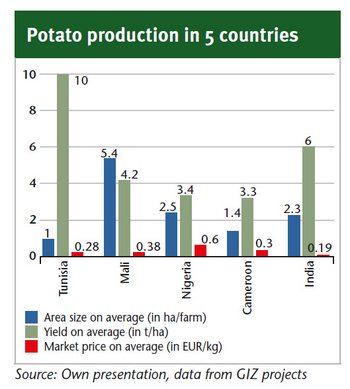 In East Africa, the potato is a staple crop, whereas in North and West Africa and India, it is mostly consumed as a vegetable. Although continuously increasing, its per capita consumption of 13 kg in Africa and 19 kg in India is very low compared to Europe’s 87 kg. The diagram shows a choice of indicators of potato production in selected countries. It clarifies, for example, that in Tunisia, while having the smallest field sizes of less than one hectare, yield is highest. The reason for this is that farmers use drip irrigation, as potato production demands a lot of water. Drip irrigation improves the efficient use of water and at the same time minimises the risk of fungal diseases such as late blight (Phytophthora infestans). This in turn reduces the rate of pre- and post-harvest losses. Since drip irrigation is expensive and access to water is indispensable, other countries use this technology only partly.

To a great deal, certified seed varieties are imported from Europe. Some of the varieties, such as Sahel, which is planted in Mali, are more tolerant to climate change. Furthermore, the regional branches of the International Potato Centre (CIP) in Kenya and India work on climate adapted and high quality seed varieties. Climate change will negatively influence the potato production. Plant diseases and pests such as white flies and tuber moths will increase and reduce the yield. According to Mans Lanting, team leader at Agriculture & Finance Consulting (AFC) and entrusted with the implementation of the potato production module of the Green innovation centre in India, losses caused at national level by climate change are estimated to reach more than nine per cent by 2020 if no mitigation and adaptation measures are introduced to get away from the business-as-usual approach. The farmers still harvest by hand, a task mostly left to women. But the use of hand hoes during the harvest damages the tubers, making them highly vulnerable to diseases. In addition, as yet, there are no cold storage systems to prevent fungal infections that result in high post-harvest losses.

To improve the situation, the innovation centres are establishing innovation farms and farmer field schools where different varieties and other new approaches are tested and results are visible. “The farmers are proud of their results and would like to share their experiences with other farmers,” remarks Ravindra Reddy, technical advisor at ETC Group, Green innovation centre India. In 2016, yields doubled in Mali, Cameroon, Tunisia, India and Nigeria thanks to trainings in good agricultural practices and improved irrigation. The limiting factors are lacking adequate machines and the small size of the fields. Therefore, Cameroon and Nigeria are establishing service provision in the mechanisation sector. The fertilisers currently used are not eligible for potato production. The projects improve the availability of adequate fertilisers. Furthermore, the application of pesticides needs to be improved. Common practice shows an uncontrolled use in terms of appropriateness of pesticides and their doses.

A potential for improvements in marketing and trade

In the countries of the working group, there are two ways to market potatoes: contract farming and direct marketing. The approaches vary depending on different local circumstances. Only a few of these countries produce for supermarkets, such as Nigeria for South Africa’s Shoprite. The majority of the countries prefer direct marketing strategies because of the missing trust between farmers and middlemen. Since storage facilities do not exist, it is essential to sell the crops as soon as possible to receive adequate revenues. The potato is also known as the semester crop in Uganda and Kenya, since the potato harvest usually falls in line with the date when the school fees are due. At the same time, harvesting results in a seasonal oversupply, which implies volatile prices. Owing to a lack of storage facilities, the farmers are forced to sell their yields in a narrow window to avoid post-harvest losses.

Farmer producer organisations are weak negotiating partners with little influence on market prices. The bargaining power is thus with various middlemen who buy the potatoes and arrange transport to the urban markets. In Kenya, potatoes are traded in unit ‘bags’, Meshack Ronoh, technical advisor at GIZ Kenya, explains. Middlemen negotiate a certain price per bag, but afterwards bring along their own big bags. The biggest bag Ronoh has seen weighed 180 kg. Rima Gmati, technical advisor at GIZ Tunisia, says that the Tunisian government is strengthening farmers’ organisations to overcome this problem. Now the farmers are organised and sell their potatoes at the same prices, which empowers them vis-à-vis the middlemen. Furthermore, potato production has been extended to different highland regions to ensure a continuous supply throughout the year, which ultimately stabilises the prices.

Import taxes and procedures in Nigeria, for example, slow down trading of imported potatoes, which implies a comparative advantage for local production. Table or processed potatoes need a continuous cooling chain and are thus less profitable to import under these circumstances.

Cameroon is the only country which exports to neighbouring countries. Its large highlands, fertile soils and good infrastructure in terms of national roads linking Cameroon with its neighbour countries clearly point to its comparative advantage. “Thanks to good agricultural and climatic conditions and high yields, Cameroon exports to Gabon, Chad, Equatorial Guinea and the Central African Republic,” explains Laetitia Soussou Wama, technical advisor at GIZ Cameroon.

The working group on potatoes consists of 23 members. The countries participating are Tunisia, Mali, Nigeria, Cameroon, and India, with its Green innovation centres. And then there is the cross-border project “Promotion of Nutrition Sensitive Potato Value Chains in East Africa” in Kenya and Uganda. Regional branches of the International Potato Centre (CIP) in Kenya and India are co-operating partners.

The working group focuses on the exchange of innovations along the entire value chain: access to seed varieties, production aspects (irrigation, fertilisation, mechanisation, plant protection and diseases control), training of farmers, business models for marketing and farmers’ organisations. Moreover, the group has shared the Farmer Business School (FBS) approach, which is in use in Nigeria and has already been adapted for Mali, while Cameroon is preparing to use it. In FBS, farmers get trained in entrepreneurial modules but also in good agricultural practices. Furthermore, the Kenyan team has developed business models which are shared with the group. In addition to knowledge transfer on good agricultural practices and lessons learnt as well as the development of training material, the working group is compiling a monography of the seven countries and establishing an online communication platform. This year, working group meetings have been and are to be run in India (July 2017) and Kenya (November 2017). The German Agricultural Society (DLG) is responsible for overall coordination and moderates the working group.