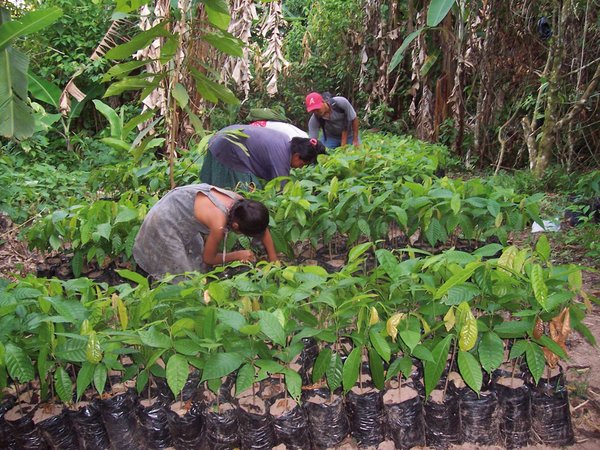 A native bean nursery in the Ecuadorian Amazon. Higher investments in research into non-commercial crops could make a major contribution to food security.
Photo: L. Ringhofer

The discussion on the type of land investment and agricultural intensification that best address both food security and sustainability should be based on a broad definition of “investment” which accommodates the realities of smallholder farming.

The tremendous production growth in the second half of the last century was underpinned not only by scientific plant breeding but also by oil-based mechanisation and the increased use of agrochemicals. It is becoming clear that, for all its successes in terms of yield, the agricultural model which is based on these drivers comes at a very high social and environmental cost. Not only has it led to an extreme concentration of land and other natural resources in many regions, but it has little to offer small-scale farmers and is increasingly destroying its own resource base. Soil degradation affects 33 per cent of cultivated areas worldwide to a greater or lesser extent (FAO 2012) and the number of chronically undernourished people has increased in recent decades. The growing consensus is that, in order to both feed a growing global population and also retain our resource base, we have no option but to intensify crop production and at the same time make the transition to true sustainability. In this context there is increasing discussion on the types of land investment which are called for.

What kind of efficiency are we talking about?

The argument about the need to increase production is still being bandied about in an effort to justify the current wave of large-scale land investment: 870 million people are already going hungry. Our ability to feed 9.1 billion people by the year 2050 depends on additional food production without the expansion of cultivable land. As “big” is equated to “efficient”, it is argued that land leases on a completely new scale are called for. It is true that as far as productivity per unit of work is concerned, there is a world of difference between large-scale industrial agriculture and small-scale, under-capitalised family farming. Today the ratio of productivity is 500:1 and, as a result of mechanisation, has increased 50-fold in less than a century (Mazoyer/Roudart 2006). But what kind of efficiency are we talking about here?

The current debate on land investment has so far ignored an important theory discussed by agricultural economists since the 1960s: that there is an inverse relationship between farm size and land use efficiency. This theory, which originates from Russian agrarian economist A. V. Chayanov, suggests that as farm sizes increase, yields per hectare decrease. The overwhelming majority of empirical studies to date on this issue confirm his assumptions. For instance, Unal (2008) analysed the data from a World Bank household survey of more than 5,000 farms in seven regions of Turkey. On average the smallest households (less than 2 ha) were nine times more productive per unit area than the largest agricultural holdings. Drawing on this study, Unal is highly critical of the market-based land consolidations imposed in Turkey since 2001 under the Agricultural Reform Implementation Program (ARIP). Instead she recommends land redistribution in favour of smallholdings, accompanied by technical and financial assistance from the state. Other studies have confirmed this finding (e.g. Eastwood et al. 2010 fundamentally, Caletto et al. 2010 for Uganda, Thapa 2007 for Nepal). Several reasons are quoted for the greater efficiency of small farms, including:

However, a clear distinction must be made between the greater efficiency of land use in the narrow sense and input-output relationships in the broader sense. By and large, major investors in land can operate much more profitably than small family farms as they have better access to factor markets and target markets. Nevertheless if we wish to cultivate our increasingly scarce fertile land efficiently in the future, we must achieve the maximum output per hectare rather than the maximum output per unit of work – for which small-scale operations are better suited than mega-farms. The crucial question is how to best support and capitalise small farms? At the same time this means that appropriate investments are required in order to realise their considerable potential to increase productivity.

Investment in land must be resource-efficient. This is the reason behind increasing efforts by agribusiness groups on policy forums to have their own “key technologies” recognised as guarantors of sustainable soil management. Whether it is the development of genetically-modified rice with an enhanced capacity for photosynthesis, the use of drought-resistant maize (Collins/Chandrasekaran 2012) or forms of conservation agriculture – non-plough tillage combined with the wholesale use of genetically-modified crops and herbicides (Misereor 2011) – new technologies are constantly being hailed as the silver bullet to bridge the great divide between sustainable resource management and production intensification. What these technologies have in common is not only that they tend to define sustainability in very narrow terms (e.g. soil protection at the cost of on-farm biodiversity) but also that they are promoted by powerful global actors who wield great influence over political decision-making processes (e.g. the Gates Foundation).
In contrast, however, there are approaches and investments which address productivity increases and resource management with a variety of measures which are adapted to local conditions. Such investments are frequently of a non-monetary character, but are knowledge-intensive and in many cases also labour-intensive. They include the production and use of natural fertilisers, the erection of protective hedging compatible with the landscape, terracing, the construction of water retention systems, agro-forestry practices, water-saving irrigation, integrated plant protection and participatory forms of seed production and distribution. There is growing empirical evidence for the tremendous potential of these forms of intensification (e.g. Godfray et al. 2010, Altieri 2012). However, in many cases they are of a non-monetary nature and rarely appear in official statistics; this impedes the scaling-up of such measures.

Land investment does not occur in a vacuum. It is made with the aim of selling cultivated crops on markets. When evaluating various land investments with a view to food security, target markets need to be taken into account, along with the food systems (local, regional, supra-regional) in which the investment is embedded. Discussions often ignore this simple fact. Aggregated global or national yield data is then put forward to simplify the argument. Large-scale investment in the cultivation of rice for export by Asian investors in Africa, for example, can do little to help local food security, except perhaps by creating jobs. In order to fight hunger, it is vital to prioritise investment in food production which reaches those regions where food security is particularly at risk. A large proportion of the rural population in developing countries still lives in marginalised regions. These include regions with difficult natural conditions, mountainsides and arid areas, but also those which are a long way from major input and output markets. It is estimated that 45 per cent of rural communities in the developing countries live at least four hours by car from major markets (Oxfam 2009). Farmers in these areas are often extremely adept at adapting to their precarious natural environment. Land investment in these regions rarely achieves the yields of high-potential areas, but is often more important in relative terms because it occurs where food is scarce and it is vital to generate extra income. Frequently these investments are in non-commercial crops such as rice, beans, cassava, purslane, sweet potatoes or millet, which are fundamental to food security in certain marginalised regions. However, as these crops are traded on informal markets there have so far been very few programmes and very little research on intensifying their cultivation. Such intensification could provide a tremendous boost to local food security.

In summary, the debate on land investment needs to take the following issues into account: first, the optimal farm size for high per hectare yields lies in the domain of the small family farm; second, non-monetary as well as monetary forms of investment in cultivation are key; third, investments should be assessed according to locality and then according to the market structures in which they are embedded.

What type of language should policy-makers cultivate to endorse specific local solutions as an investment in resilient farming, and to promote their spread? The requirement to develop a broadly-defined and yet discerning appreciation of “investment” in agriculture is proving a major challenge. The FAO’s Voluntary Guidelines on the Responsible Governance of Tenure of Land, Fisheries and Forests could offer a good basis for an open and non-ideological debate. They point out that governments should not just respect and protect informal land use rights, but should also actively promote investment in small-scale farming. In addition they emphasise redistributive land reforms as an option. Above all the current debate about agricultural investment must take into consideration that the 1,500 million small farmers around the world form the backbone of the food system in most regions. Country studies in Bolivia, Ecuador and Brazil have shown that 60 to 80 per cent of the staple foods and more than 50 per cent of dairy and meat products come from smallholder farms (Quan 2011). There is no doubt that agriculture must become more productive and at the same time more sustainable. But these solutions must be developed by the farmers and with the farmers, not against them.