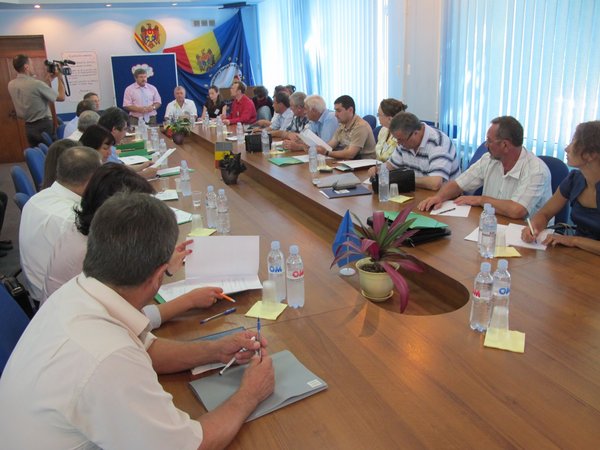 The authors were part of an international team that entered uncharted territory by designing and implementing a participatory and integrated development planning approach in a post-Soviet country with a legacy of central planning – the Republic of Moldova. The article traces the pilot process of facilitating broad-based participation in planning for improved water supply and sanitation at district level while simultaneously bringing together stakeholders at all levels in a national policy dialogue.

The Republic of Moldova is in the middle of a profound socioeconomic restructuring process that has a particular effect on rural areas. After the breakdown of the Soviet system, state revenues were cut dramatically, which reduced the ability of the government to provide adequate and effective public services such as water supply and sanitation (WatSan).

Today, the country is considered to be the poorest European economy. As part of an attempt to close the gap in meeting public demands, responsibility for efficient public services provision was handed over to local government units. However, the decentralisation reform to strengthen sub-national development capacities is still underway. In parallel, a regional development policy has been adopted to overcome disparities and the uneven distribution of economic activities across regions. Since 2009, regional development institutions have been developing integrated strategies and bringing together a multitude of actors across different levels and sectors.

There is an unambiguous correlation between the quality of services and the degree of public participation during local development planning. Due to the legacy of centralised planning, there is not much experience with inclusionary planning in post-Soviet countries. Low levels of political efficacy have led to political disengagement of the civil society. The transfer of planning tasks to lower levels of government remains a huge challenge.

Nevertheless, the planning paradigm in the Republic of Moldova has substantially changed from top-down and technocratic to participatory today. Although planning is a bureaucratic activity in need of technical expertise, there are various reasons to promote meaningful engagement of citizens in the planning process. It is recognised as contributing to Good Governance, enhancing the transparency of decision-making, and providing planners with crucial information on local realities. The question is whether citizens in post-Soviet Moldova actually want to be involved in decision-making. Or does the image of planning have a negative connotation stemming from the era of Soviet central planning?

This article results from experiences made during the pilot implementation of a participatory approach for integrated district development planning in the Republic of Moldova. WatSan sector planning documents in the Republic lack both a coherent, transparent prioritisation of infrastructure investments and realistic, measurable targets. To assist the district administrations with their mid-term strategic planning for WatSan infrastructure development, GIZ (Deutsche Gesellschaft für Internationale Zusammenarbeit) commissioned the SLE (Seminar für Ländliche Entwicklung) to carry out a field assignment from August to October 2011.

As part of SLE postgraduate studies, an interdisciplinary team of junior advisors designed a participatory approach for integrated planning and supported its implementation in two pilot districts, Cahul and Riscani. It should be noted that some final results of this pilot process are still pending. The aim of the whole endeavour is to guarantee a more efficient and needs-responsive resource allocation at district, regional and national level for the implementation of water and sanitation development activities. Using Stakeholder Dialogues as a tool, relevant stakeholders were brought together to set priorities for WatSan investments in the two pilot districts, and to align district planning with regional and national strategies. This kind of vertical interaction within integrated planning is a dimension of multi-level governance, which goes hand in hand with decentralisation.

Status quo of participation in decision-making

The institutions regulating and facilitating public participation in issues pertaining to the governance of the physical and socio-economic environment are only poorly developed in the Republic of Moldova. This is why participation in public decision-making has so far only been executed sporadically on the level of communes and towns, initiated by international development organisations. Resource allocation and decision-making characterised by informal processes is a result of low public involvement and a poor level of transparency in development planning. Hence the approach tested by the SLE team was a venture into uncharted territory. The essence of the approach is the unification of national strategies with local priorities at the interface between national and commune level: a development plan for the district.

In the future it shall integrate all public service domains (horizontal integration), although, for the time being, it is focusing on the most pressing ones. The approach for participatory development planning at district level has been designed by the team to serve all domains of public service provision. In this case, it incorporated the identification of national WatSan policy goals and was proposed to national decision-makers to complement these goals with locally adapted district priorities. These district priorities were seen as making the difference between increased attention for disadvantaged areas, or the concentration on extending and upgrading existing service provision in already better-off zones.

Organising and designing participatory planning at the district level

Three issues surfaced while the team organised the Stakeholder Dialogues. First, the mode of selection for the stakeholder representatives, and corresponding repartition of the major groups: a) district administration, b) mayors of rural communes, and c) civil society representatives. This selection is supposed to be driven by bottom-up processes: delegation of representation for a specific task as opposed to self-appointment of traditional elites, or top-down selection by the next higher government level.

A second, complex issue was that of stepwise, transparent and strategic decision-making in the field of WatSan services. While participatory planning is not complex in technical terms in principle, the concrete subject of water and sanitation service provision (in this pilot process) is. Technical options, respective investment and recurring cost need to be made transparent for the stakeholders to take well-informed decisions. The main input of the SLE team's support to the newly established regional development agencies was the facilitation of exchange between the stakeholders, starting with the formulation of objectives, and leading to weighted priorities. The regional development agencies are the ones responsible for the facilitation of broad-based participatory strategic planning.

A third domain of challenges concerned logistics. On the one hand, it relates to the timely and comprehensive availability of accessible information on the current state of WatSan infrastructure, service provision, and potential costs. The other aspect concerns the gathering of people from a larger area, within a limited timeframe.

Despite the pioneer character of joint, strategic planning the responses and involvement of delegates were very positive, claiming that learning about the respective counterpart’s point of view was very valuable. This is true both for representatives of the national level as well as mayors of remote communes. However, balancing the need for efficacy (through delegation) against the will to give ‘everyone’ a say has been questioned by stakeholder representatives and non-participants alike. Most stakeholders were not familiar with special questions regarding WatSan service provision. In addition, delegates have little experience with decision-making. Due to the approach being applied for the first time, the issue of delegation had not been given as much attention as would have been desirable: members of the facilitation team and the district administration chose delegates.

Hence, there was a mixed response among the representatives to the pilot run of a participatory planning process. While for the majority of representatives, being a delegate was part of their everyday lives as mayors, actors from civil society organisations were thrilled to be invited to join full-time politicians in their decision-making. The wider public, however, remained uninformed about the process due to insufficient communication and media involvement. In addition, since comprehensive data on the WatSan status quo had not been readily available at the time the Stakeholder Dialogue had been conducted, there have been signs of reluctance to carry on with the process. Some stakeholders have called for a ‘pragmatic’ delegation of the planning to experts.

Not least due to rising pressure by the people, and constant lobbying by international partners, there had been a paradigm shift from a centralised, top-down model of planning towards a participatory approach to strategic planning in post-Soviet Moldova. The approach suggested adds transparency to politically sensitive decisions on resource allocation for water and sanitation development activities. Implementing participatory district development planning, however, revealed that expectations of immediate project selection and funding remained high among some participants.

Others took a rather passive role of presence during the stakeholder dialogue. In addition, until the last step, some participants were not clear about the expected outcomes. In this case, working in smaller, more focused groups was conducive to the clarification of questions. Our experience has shown that the key principle is to continuously inform stakeholders about the objective and status of the planning process. This holds true especially for stakeholders not acquainted with this form of joint decision-making, to avoid feelings of being disadvantaged in terms of the outcome. Yet, it remains to be seen how the results will look like in a couple of years.