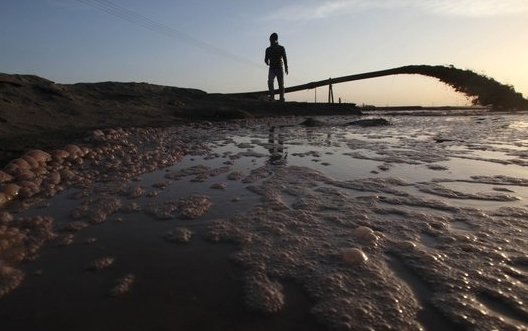 Outflows from a pipeline into a "rare earth lake" formed by the cumulative emission in the nearby of Xinguang village in Baotou, Inner Mongolia.
Photo: W. Huan/ChinaFotoPress

The real price of rare earths

Lanthanides, or rare earths, as they are usually referred to, have found widespread use in modern technology, also for regenerative energy systems. However, their extraction and processing tends to be a rather messy business, spoiling crop yields and rendering vast expanses of rural and forestry areas barren. Worse still, toxic and radioactive substances from processing dumps and mine tailings have claimed the lives of many locals. Government regulations can at least stamp out especially devastating wildcat mining activities, although government involvement as such by no means implies that all is well with rare earth mining.

Opposition to an Australian rare earth processing plant in Malaysia is mounting just as China’s restrictions on exports of the much sought-after metals threaten to bite. Among the locals, fears of contamination have been fuelled by the disastrous environmental and health record of rare earth processing in Inner Mongolia, and also by memories of the major health scares that a rare earth plant operated by a Japanese firm caused in the 1980s.

Rare earths are relied on extensively in modern high-tech equipment. For instance, they are used in cell-phones, flatscreen televisions, rechargeable batteries, magnets, and also solar panels and wind turbines. They also play a role in sophisticated arms technologies. But these metals are not really rare. The problem is to find deposits rich enough to be exploited. China is particularly fortunate in this respect. Although it only has 35 percent of the world’s known rare earth deposits, it accounts for 95 percent of global production.

The catch in mining and processing rare earths is that it entails severe environmental pollution and health problems. Rare earths often occur in conjunction with radioactive elements that which can cause grave health problems. The mining and processing of rare earths involves toxic chemicals such as ammonia nitrogen and vitriol ammonia. Rare earth exploitation in China’s Jiangxi province brought in 4.89 billion dollars, but clearing up environmental pollution in Ganzhou, one of the cities in the province involved in the rare earths industry, could cost a staggering 6.05 billion dollars. Entire forests have died in the region.

Two thirds of China’s deposits are mined in Baotou, in Inner Mongolia, where the Gobi Desert starts. The mining dumps have put a heavy toll on the environment – and on people’s health. Radioactive thorium and uranium contained in the tailings have led to cancer and birth defects among the locals. A total of 66 cancer deaths relating to the rare earth operations were officially recorded from 1993 to 2005. Crop yields fell substantially in the period. Poisoned fields have since become barren. Nothing will grow in the district.

China’s response to the situation has been to toughen controls on the industry. New regulations put into force last year have at least curbed the activities of small companies making quick profits and then simply disappearing, a manager of one of the larger companies maintains. But the problem itself remains. Jamie Choi, toxics campaign manager for Greenpeace China, says that “there is not one step of the rare earth mining process that is not disastrous to the environment”.

Choi maintains that the impact of the government crackdown will depend on whether it is “implemented properly”, although one consequence has already become quite clear. In 2009, the country announced reductions in its export quota, and further restrictions in exports of rare metals were subsequently imposed causing prices to soar. Other countries have since sought new options to obtain the metals or revive facilities previously shut down because of cheap supplies from China. Among them are Brazil, Tanzania, South Africa, Australia, Greenland, Canada and the USA.

The Mountain Pass mine, located in California, USA, covered most of the world’s demand for rare earths between the mid nineteen-sixties and mid nineteen-nineties. The mine closed in 2002, facing not only tough Chinese competition but also environmental restrictions after a major radiation leak. Wastewater had been piped to the Ivanpah Dry Lake, in the Mohave Desert, 14 miles away. Removal of scale in the pipe had caused ruptures. The scale contained radioactive thorium and radium, both of which occur naturally in the ore. Federal authorities stated that in all, around 600,000 gallons of radioactive waste flowed into the desert. The mine reopened again in 2011, following extensive cleanup measures, warnings of the USA’s defence supply chain being dependent on China, and the granting of a permit for another 30 years of operation. Mine owners Molycorp hope to attain full production again this year.

A joint venture in Malaysia formed by Mitsubishi Chemical Industries with other regional companies, including a state-owned enterprise, started a rare earth processing plant in Bukit Merah, Perak, Malaysia, in the early 1980s. Known as Asian Rare Earth (ARE), the plant handed on its waste to Perak Government, with a view to its potential as a source of nuclear energy being taken advantage of in the future. With China now considering the development of a new generation of thorium-fuelled nuclear power plants, such waste dumps could indeed eventually turn into gold mines.

Toxic and radioactive waste in the dumps caused cancer rates to soar in the district, notably the incidence of leukaemia among young people. Also, an unusually high number of congenital birth defects, miscarriages and infant deaths were recorded, with lead poisoning from the tailings playing a role as well. Persistent and strong public pressure eventually forced ARE to stop operations, and the Bukit Merah plant was closed down in 1994.

Work on a proper storage facility for the waste only started in early 2010. And as late as June that year, former Malaysian premier Dr. Mahathir Mohamad, an opponent of nuclear power in the country, stated that “in Malaysia, we do have nuclear waste which perhaps the public is not aware of. We had to bury the tin tailings in Perak, deep in the ground. But the place is still not safe. Almost one square mile of that area is dangerous.” Outspoken though ex-Premier Mohamad may have been, his remarks were not entirely correct. For an inspection of the 80,000 drums containing the radioactive waste in the dump revealed that they were in fact loaded with thorium hydrochloride, not tin tailings.

In Malaysia, continuing public protest has delayed the opening of a rare earth refinery plant by Australia’s Lynas Corporation in Gebeng, Kuantan. The plant, originally scheduled to start operating last year, would be the largest of its kind in the world. The plan is to process lanthanide ore shipped in from Mount Weld Mine, in Western Australia.

A temporary operating licence (TOL) granted last year has been suspended by the authorities. “We need the TOL as fast as possible to prove this plant is safe,” says Lynas Malaysia’s Managing Director Mashal Ahmad. Despite the widespread public protest in the wake of the Buket Merah disaster, Ahmad is confident that Lynas will eventually get the go-ahead for the plant.

Asked why the Gebeng site was chosen, Ahmad refers to the problem of water supply for refinery plants in Western Australia. “Even in Perth, it is very difficult to get sufficient amounts of water. The water in the region comes from desalination plants,” he explains. “Water is expensive in Western Australia. It would not be economical to build the plant there. But there is water in Kuantan.”

Another argument in favour of a Malaysian plant that Lynus have persistently put forward is that it would provide the country with a local rare earth source for its burgeoning high-tech industry. However, one aspect that Lynus representatives prefer not to refer to is the much tighter environmental regulations that a refinery plant would be subject to in Australia.

Occupational health and safety specialist Dr. T. Jayabalan heavily objects to the new Gebeng plant, referring to toxic waste that can travel for miles in winds. “It creates a path of harm,” he says. “And people are unaware what this harm is.”

Obviously, governments imposing tough regulations on mining and processing operations can at least help stem the spread of wildcat mines and their disastrous effects. But state intervention is no ultimate guarantee that pollution will be prevented, as the long history of the Buket Merah disaster shows.

Wherever the optimum locations for the world’s chief sources of rare earths turn out to be in the end, the prospect of green energy technologies becoming widespread in the industrialised countries at the expense of the environment and people’s health elsewhere seems rather worrying. And it seems ironic that the waste from processing input for the new technologies could serve the revival of one of the very technologies they were supposed to render obsolete: nuclear power.