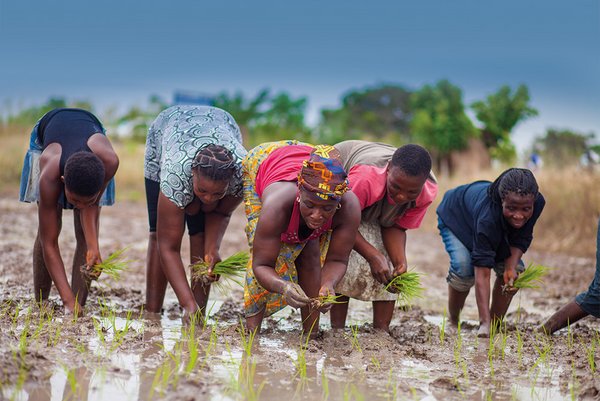 Women are key actors in rural development but also face numerous challenges when working as smallholder farmers. The German Association of Rural Women (Deutscher LandFrauenverband, DLV) has taken up the task of strengthening Ghanaian women smallholder farmers to achieve gender equity and equal participation in the agriculture and food sector – a project from rural women for rural women.

Over 60 per cent of Ghana’s roughly 29 million inhabitants derive their livelihood from the agricultural sector. Women in rural areas are mostly engaged in unpaid family work. They are key actors in the agricultural sector, where they constitute more than 50 per cent of the labour force and produce 70 per cent of the country’s food stock. Similarly, 95 per cent of those working in the agro-processing sector and 85 per cent of the workforce in food distribution are women. However, women are constrained by low education attainment, limited access to productive resources such as land and credit and to the market, technology and extension services. Moreover, they have to cope with overwhelming workloads. Clearly, women are critical stakeholders in the agriculture, food security and nutrition sectors, and they deserve adequate support.

As a recent study shows, a lack of economic opportunities is causing people to migrate from rural to urban regions (see on page 23). Especially youth seeking better conditions are moving to towns and cities, but with an underdeveloped industrial sector, the urban areas offer no decent jobs. The majority of migrants (both temporary and permanent) tend to be men. Women in the rural areas are then left behind and have to see to the farming and household chores and take care of the children. Thus, migration results in lower agricultural production in the rural areas while aggravating social problems in the urban areas – the overall impact is food insecurity and chronic poverty in both rural and urban areas.

Rural to rural migration and its implications

Apart from this general situation in rural Ghana, many farm families from northern Ghana migrate to the south to benefit from two cultivation seasons instead of just one in the north. North-to-south migration leads to considerable ethnic diversity, with migrants forming the overwhelming majority in farming communities where land is available. This is the case, for example, in Krachi East District in northern Volta, whereas the majority of farming communities in the more southern districts of the Volta region are locally indigenous people. Limited farmland combined with a growing population has resulted in local differences in the ethnic, social and traditional setting of farming communities. But the farming families from northern Ghana mainly stay within their new community settlements in the southern regions, whereas indigenous tribes keep to themselves.

The migrating women and their husbands get access to farmland from landowners through leasing agreements, sharecropping or purchase. However, because the men move first and their wives and other members of their families follow later, landowners prefer to deal with families through the men. As a result, migrating women access farmland through their husbands. Since they are more disadvantaged in taking independent decisions, this implies a constraint to their empowerment.

Gender equality is a key development topic and a crosscutting issue. Gender inequality in the agricultural sector undermines the achievements of sustainable agricultural development because programmes and projects have not sufficiently assessed the needs of men, women and youth within traditional settings to make responsive interventions. In this context, two sister projects of Deutsche Gesellschaft für Internationale Zusammenarbeit (GIZ), the Market Oriented Agricultural Programme (MOAP) and the Green Innovation Centre Project (GIC) Ghana, conducted a study in collaboration with the Ghanaian Ministry of Food and Agriculture in 2017 on “Promoting Gender Equality and Mainstreaming within the Traditional and Cultural Settings of the Operational Areas of Selected Value Chains of GIZ, MOAP and GIC in Ghana”. The study was carried out in three regions in southern Ghana (Volta, Central and Brong Ahafo).

It shows that in the Volta region, women mainly grow vegetables and other labour intensive crops, while men are mostly in charge of cultivating cash crops such as maize, rice, yam and cocoa. This is because men have relatively large acreages and more financial resources than the women. However, the women contribute labour in cultivating these crops. Rice cultivation was seen as a women’s crop in Akpafu Odomi in the Volta region.

Furthermore, the study reveals that farming is more difficult for women because the cost of labour is high and women lack small farm implements and access to resources such as farm inputs, land, labour and credit. Study results show that women had a considerably lower acreage of land than men with an average half to two acres for rice and maize, compared to the men's six acreages.
The study concluded that amongst other things, there was a need to form and strengthen groups, especially women farmers’ based organisations through which women can get better and more independent access to resources. Furthermore, a design of agricultural extension systems, fabricating labour and cost-saving technology with specifications favourable to women as well as support to women’s agricultural processing, storage and marketing efforts could enhance gender equity. In addition, education on reproductive health and nutrition to reduce maternal and child deaths is a key element to strengthen women, especially in rural areas.

Based on the study findings its sister projects, the German Association of Rural Women (DLV) has taken up the task of strengthening Ghanaian women smallholder farmers to achieve gender equity and equal participation in the agriculture and food sector.

The goal of the DLV activities is to strengthen the professional interests of women in Ghana’s agricultural and food sectors and to contribute to an equal participation in economic and personal development opportunities of Ghanaian women in rural areas. The objective is to increase the income of smallholders, to increase employment in rural areas as well as to improve regional food supply by strengthening women in rural areas. Given north-to-south migration, DLV works with mixed ethnic groups in their communities to empower them to develop themselves and their community, thus reducing the risk of further migration.
The activities focus on gender equity through a multi-level approach using four components: rice processing, nutrition education, strengthening smallholder women interest groups in rural areas and exchange programmes with Germany.

The income of beneficiary rice farmers and processors in the Volta region is expected to increase by minimising post-harvest losses such as breakages of grains during milling. This will be achieved by processing locally produced rice to parboiled rice. Thanks to its specific characteristics, parboiled rice is more nutritious than straight-milled white rice and less susceptible to pest infestations. Its reduced cooking time also means that less fuel will be burned. Local partners will provide support to the women when marketing their parboiled rice. Introducing these innovative techniques in processing rice will create alternative employment opportunities and new jobs along the rice value chain, thus creating attractive prospects for young women to stay in the Volta region.

Nutritional deficiencies and malnutrition in smallholder households are expected to decrease significantly in the project region. German and Ghanaian women act together as facilitators to improve food security and nutrition trainings. This is where the knowledge of Ghanaian and German agricultural and nutrition experts meets. In co-operation and exchange with each other, innovative training modules for multipliers will be developed. The aim is to teach a basic understanding of healthy and balanced nutrition centring on locally available food. Furthermore, a women’s network for nutrition education was established through regular exchange meetings of the trained multipliers. Now it will be possible to enhance food security and reduce maternal and child deaths.

Representation of interests of women smallholder farmers in rural areas

In addition, the DLV activities are strengthening women farmers’ based organisations as group formation in general facilitates women’s access to resources (land, credit and farm inputs). Selected representatives from the rice and maize supply chains in the programme regions will be supported in their efforts to improve political and social framework conditions. Seminars on lobbying and advocacy are aimed at empowering women to better represent their interests in order to improve their social conditions. This includes gaining influence on government policies.

Exchange and training in Germany

As part of the DLV activities, women professionals as well as female decision-makers from the agriculture and food sector in Ghana participated in seminars in Germany in order to develop innovative approaches for local adaption in rural areas. Seminars focused on women leadership and organisational development as well as innovative approaches in agriculture. They also included field trips to farms led by female farmers in Germany. This offered the opportunity to exchange knowledge and experience among Ghanaian and German rural women, among Ghanaian rural women as well as among women from Ghana with women from other countries of the Green Innovation Centres for the agriculture and food sector.

Through these activities, the empowerment of women and the creating of awareness for gender-sensitive project designs that are also necessary in accordance with the result of the gender study and rural development can be promoted as rural women are key actors in the agricultural sector – in Ghana, in Germany and world-wide.

The German Association of Rural Women (Deutscher LandFrauenverband, DLV) was officially founded in 1948 with the aim of improving the social, economic and legal situation of women in rural areas in Germany. DLV has internationalised its activities and is committed to implementing a project in Ghana.
The DLV project in Ghana is part of the “One World – No Hunger” initiative of the German Federal Ministry for Economic Cooperation and Development (BMZ) and is implemented by Deutsche Gesellschaft für Internationale Zusammenarbeit (GIZ).