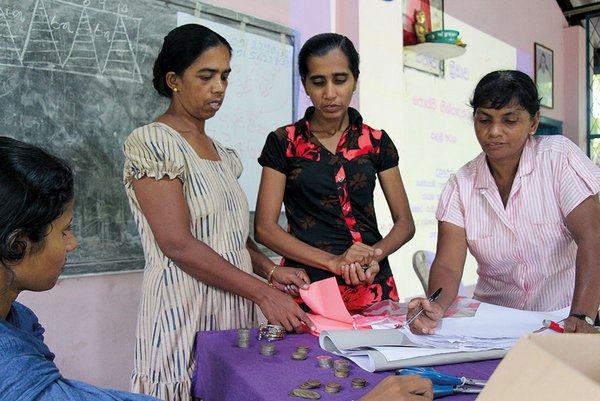 In Sri Lanka and Nepal, many migrant families struggle to make ends meet instead of being able to save part of their received remittances for an investment that would allow them to build the basis of their livelihoods at home. Based on empirical data from labour migration projects implemented by Helvetas Swiss Intercooperation in Sri Lanka and Nepal, this article demonstrates that financial literacy is indispensable for a more sustainable use of remittances.

Across the globe people move within and between countries in search for a better future. Various factors contribute to the decision to migrate for work. Many others are forced to migrate because of difficulties to sustain livelihoods, natural disasters, violent conflict, persecution or the need to escape unhealthy family situations. According to the United Nations Department of Economic and Social Affairs (UNDESA), 244 million people world-wide have moved to another country. This figure includes migrant workers and refugees. Consequently, remittances are an important source of income for millions of families in developing countries across the world. In the past three decades, the flow of remittances to developing countries has constantly been growing. The World Bank’s latest figures confirm that 429 billion US dollars (USD) in remittances were sent to developing countries through official channels in 2016, an amount substantially higher than Official Development Assistance and more stable than Foreign Direct Investment.

Similar trends are observed in the contexts relevant to Sri Lanka and Nepal. The continuously growing economies of West and East Asian countries such as those in the Gulf, but also Malaysia, attract millions of workers not only from South and South-East Asia but beyond as well. Sri Lanka, for example, has witnessed a continued increase in foreign employment since the 1980s. While at that time a mere 15,000 people migrated for employment, they today amount to 260,000. In 2015, remittances reached 6.9 billion USD. Overseas employment is the largest foreign exchange earning source for both the Nepalese and the Sri Lankan economy. Since formal labour migration commenced, it has generated substantial and continuously growing inflows of remittances, while at the same time relieving pressure on unemployment. In Nepal, barely 2,000 people registered as migrant workers 20 years ago, but in recent years, on average, around 500,000 Nepalese have been leaving the country for foreign employment annually. Remittances have continuously increased and reached 6.3 billion USD in the Nepalese fiscal year 2015/2016, which equals 30 per cent of the GDP.

What is the money used for?

Whether migration indeed has beneficial impacts on long-term sustainable development of the migrant families depends on a wide range of variables, such as the local context, type and extent of migration and the size of remittances. More concretely, the main impacts depend directly on patterns of expenditure, investment and labour allocation in migration households, or in other words whether the income is used on production or only consumption. Similar to the discussions on the magnitude of the positive impact of migration on development, literature has debated the productive versus the consumptive use of remittances, as summarised by Bhandari and Chaudhary (2016). One line of research suggests that migration and remittances contribute positively to the migrant families and their communities through initiating development dynamics by lessening production and investment constraints in the economy, creating an environment for risk diversification, helping migrants to establish businesses, poverty reduction, and through investment in human capital development. Other scholars argue that remittances are primarily used to cover consumption expenses.

Research from Sri Lanka and Nepal supports both lines of argumentation. The International Labour Organization (ILO) sheds light on the use of remittances in Sri Lanka and finds that the major areas include housing, children’s education, personal assets and consumption. Migrant families’ expenditures on a range of unproductive and consumable assets have increased after migration. In addition, such equipment oftentimes leads to a subsequent increase in recurrent expenditure as most of the devices consume energy or fuel and require costly maintenance. In the surveyed area, less than five per cent of the returnee migrant workers have invested in productive assets, such as land, housing, three wheelers, and, to a smaller extent, small businesses.

These findings from Nepal and Sri Lanka are not surprising when taking into account that many migrate due to the lack of economic opportunities close to home and out of the need to provide food, shelter and clothing to their families. Furthermore, knowledge of financial literacy, including financial planning and budgeting, financial services and concepts of savings are often lacking. Financial literacy incorporates knowledge, skills and attitudes “to make informed judgements and to take effective actions regarding the current and future use and management of money. It includes the ability to understand financial choices, plan for the future, spend wisely, and manage the challenges associated with life events such as a job loss, saving for retirement, or paying for a child’s education, as a US Government Accountability Office report describes. The importance of financial literacy for sound remittances management has been confirmed by field experiences gathered in the context of implementing a Helvetas project.

When designing measures to support migrants and their families interested in establishing small businesses as a productive investment of their remittances, it became evident that most families in the targeted areas in Sri Lanka and Nepal were not able to save remittances and establish alternative income sources. On the contrary, many families remained indebted, did not manage to pay back loans and became dependant to different degrees on income from labour migration. In order to address these issues, financial literacy interventions were designed to empower migrant workers and their families to set explicit and realistic financial goals and work towards achieving them. A sound understanding of the financial options, money management and available services (savings, credit and loans linked to remittances) is a stepping stone to long-term and sustainable economic development.

Participants start to reflect on their expenditure patterns, optimise them and thereby increase savings. Anecdotal evidence confirms that participants have most benefited from reflecting on their expenditure patterns and optimising them by establishing and comparing budgets. For example, families decided to sell not needed electricity-consuming equipment, consequently reducing recurrent expenses. Bulk purchasing of food products is another successful strategy adopted by many participants. Keeping records of income and expenditure and practising participatory family decision-making and goal setting also contributes to enhance trust and build better relationships among the migrant and his/her family, as well as among the (extended) family members who benefit from remittances.

Additionally, participants are sensitised on remittances as hard-earned money and sacrifice not only by the family left behind, but also by the migrant living and working under what are often harsh conditions. One broader goal is thus to reduce family tensions associated with control over and (mis-)use of remittances. Furthermore, beneficiaries were less susceptible to loan sharks providing easily accessible loans at high interest rates for migration-related expenses. Those who had already obtained loans were supported in establishing repayment schedules and transforming the informal loans into formal ones with banks. Most importantly, in both countries, around 50 per cent of the participants started engaging in income-generating activities, and in Sri Lanka, these were specifically trained on a number of trades such as tailoring or sweets production.

In both countries, Sri Lanka and Nepal, many of those who had started their own income generating activities expressed that they did not consider a re-migration necessary. However, they would continue with the business as a family, and expand where possible. In addition to the financial benefits, most families reported that family conflicts had decreased. The reasons for this are seen not only in reduced financial problems, but also in increased and better communication within the family. Financial questions have been taken as entry points to foster an open communication which subsequently also allowed to address further issues. Whether better financial management results in fewer conflicts or joint family financial planning leads to a more open communication and better relations is difficult to determine conclusively.

Return and reintegration of migrant workers into their home communities gains importance for both governments in Nepal and Sri Lanka and requires concrete programmes. Achieving this is only possible when return and reintegration is considered from the beginning of the migration cycle. The basis for successful economic reintegration is sound remittances management – right from the start. In the context of Sri Lanka and Nepal, this can only be achieved by low-skilled labour migrants and their families if they have the relevant knowledge, skills and attitudes of financial literacy. It is key to include financial literacy for migrant workers and families left behind as a stepping block in any policy targeting return and reintegration. This must be followed by adequate financial products provided by banks and micro-finance institutions and ultimately by a favourable framework for small-scale investments. The recently passed Sri Lankan Sub Policy and Action Plan on Return and Reintegration of Migrant Workers recognises the importance of financial literacy and sets an indicator accordingly.

The Helvetas project experience in Nepal and Sri Lanka has demonstrated the importance of financial literacy in the frame of safer migration. It is a key aspect contributing to maximise the benefits of labour migration and reducing its risks and negative impacts. It furthermore lowers dependency on remittances and makes (re-)migration more often a choice than a mere necessity for survival.