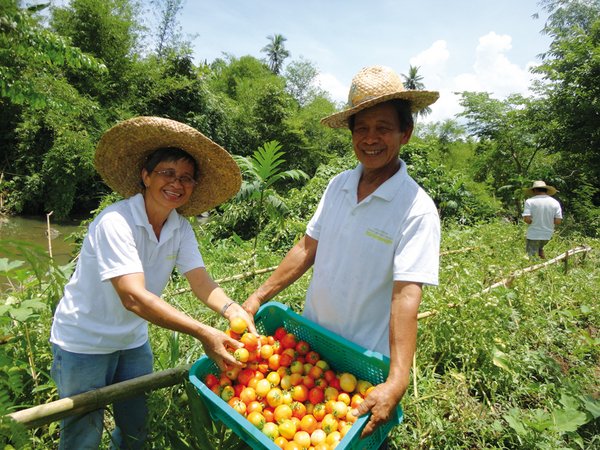 Farming with a conscience

Initiated by non-governmental organisations and private citizens in the mid 1980s, organic agriculture is still in its infancy in the Philippines. Today, the government is providing the means towards a globally competitive yet sustainable organic industry. In this context, the Organic Agriculture Program of the University of the Philippines Los Baños supports vegetable production by smallholder farmers.

“This patch of vegetables is for our home consumption, so I don’t use pesticides here. That bigger vegetable area is for selling ... of course I use pesticides and fertilisers to ensure good harvests and income.”

A common response from a conventional vegetable farmer.

Greater consumer awareness of human health and environmental hazards caused by the indiscriminate use of pesticides and fertilisers has increased the demand for safe organically produced food in the Philippines. In response, the private sector, non-governmental organisations (NGOs), government agencies, local government units and people’s organisations have engaged in various activities geared towards organic farming.

The University of the Philippines Los Baños (UPLB) initiated its Organic Agriculture Program in 2007. It focuses on spreading organic vegetable production among smallholder farmers not only as a technology but also as “farming with a conscience”, an alternative way of life that includes personal and social responsibility. The project aims to promote safe and healthful food, protect human health and the environment, support sustainable livelihoods and harmonise the participation of government agencies and the civic sector. From 2007 to 2010, it was funded by the National Economic and Development Authority under the Philippine-Japan Grant Assistance for Underprivileged Farmers. It was piloted in three selected towns in Southern Luzon. Phase 2 of the project is currently being funded by the Department of Agriculture Bureau of Agricultural Research in another two adjacent towns from 2011 to 2013. There is collaboration with the farmers’ associations, municipal and provincial authorities, government agencies, NGOs and the private sector.

What has been reached?

Building farmers’ capabilities: Knowledge-building among farmer groups has included training series and seminars on various aspects of organic vegetable production and marketing. Leadership and organisational strengthening have been addressed, too. Field trips, cross-farm visits, attendance of conferences and actual selling in trade fairs have boosted farmers’ knowledge, skills and confidence, broadening their minds towards networking and collaborating with other agencies and the private sector. Cross-farm visits have encouraged farmer-to-farmer exchange of knowledge and techniques. Farmers have realised the value of team work and joint decision-making to overcome challenges. The initial group of 20 farmers has now grown to about 50. They are farmer leaders in their respective villages and have promoted both organic vegetables and rice farming.

Farmer partners have been trained as farmer trainers so that even if the project ends, they will be able to pass on their knowledge of organic farming to others interested. The project has produced visual aids, booklets, handbooks and a video in the local language that the trainers can use and distribute. They now regularly conduct training and seminars for new members as well as for other farmer associations, schools and civic groups. They have been invited to local and national radio programmes and national television to share their success stories on organic agriculture.

Farmers have learnt how to deal with documents, write project proposals and negotiate for funds. As a result, they have, for example, obtained livelihood funds from several government programmes.

Early on, the farmers themselves decided to install a group savings fund. They agreed to pay a minimal amount as monthly dues and set aside part of their profits from sales of organic vegetables and vermicompost.

More food security, lower production costs. Thanks to the diversified cropping system, farmers are able to harvest vegetables they can consume or sell almost every day. The calendared planting and harvesting of vegetables enables a virtually year-round supply of vegetables.

Together with the farmer groups, the UPLB team has standardised the formula of organic fertiliser from fermented chicken manure. Now able to meet the registration requirements of the Fertilizer and Pesticide Authority, the farmers hold a license to manufacture, distribute and sell their organic fertiliser.

With vermicomposting, farmers can save fertiliser costs while earning income from selling compost and the worms. The project team has also successfully collaborated with the solid waste management office of two towns in the project site. Vegetable and fruit peelings from the town market are used as substrate for vermicomposting.

To ensure the source of worms (African Night Crawlers) for vermicomposting, a “pay forward” system has been introduced. An initial ten farmers receive a kilogramme each of worms to culture in prepared vermicomposting bins. After about three months, the worms have doubled in number. The farmers have to pay forward one kilogramme of worms to another interested farmer and so on, ensuring a built-in source of worms even if the project stops.

More income from direct sale. Organic vegetable production and marketing have increased household incomes thanks to increased productivity per unit area. The farmers can easily sell their organic products at prices 10 – 30 per cent higher than conventional ones on local markets. Organic Product Centers were set up as the UPLB team linked the project farmers’ groups to the Department of Agriculture’s Agribusiness and Marketing Assistance Division which also provided start-up capital for the shops. In one of the project sites, the town mayor provided counterpart funds. Linkage with the Department of Trade and Industry has resulted in marketing assistance and free training for farmers on entrepreneurship.

In addition, farmers have been exposed to trade fairs and festivals where they can sell their organic vegetables at higher prices. Here, they meet and link up with other organic farmers and potential customers. For a year now in Quezon province, the provincial governor has organised a Friday organic market which has been attracting organic farmers and buyers from nearby towns. One of the farmer groups has been invited by its town parish priest to sell organic products in the churchyard at least once a week.

Assuring organic product quality. The project initially organised workshops to install internal control systems for project sites to ensure that organic products conform with certification standards. A manual was developed to serve as a guide for farmers towards group certification under the Organic Certification Center of the Philippines (OCCP). However, the process and documents became too complicated and expensive for the smallholder farmers. So the project team shifted to the Participatory Guarantee System (PGS; see article on pages 18-21). The UPLB team collaborated with the Office of the Provincial Agriculturist and MASIPAG, a local NGO recognised by the International Federation of Organic Agriculture Movements (IFOAM).
A series of stakeholder workshops gave birth to the development of a set of organic standards and a manual of operations for the province of Quezon. Later, a PGS committee was created by workshop participants. Quezon is now the first province in the country to establish a PGS at provincial level. Farmer inspectors and members of the Evaluation and Approval Committee have already been trained. The PGS is currently being pilot-tested in three towns of Quezon province.
To further ensure product quality, a modified rapid test kit was developed at UPLB to detect pesticide residues in vegetables. Selected agricultural technicians and farmer inspectors were recently trained and given sample test kits to assess ease of use and reliability in the field. Refinements will be done based on their feedback.

Despite much progress already made, a number of challenges still have to be mastered:

Adaptation to climate change. Erratic weather has negatively affected production and hence year-round availability of organic vegetables. Greenhouses and rain shelters can protect crops from excessive rains. Rainwater can be harvested, stored and released during the dry periods through drip irrigation. However, these methods require capital that our smallholder farmers cannot afford.

Easing up labour demand. Organic farming requires high labour input during establishment. But with most rural youths preferring jobs in the cities, labour is hard to come by. Land cultivation could be much easier and faster with portable hand tractors and other small farm machines. But smallholder farmers cannot afford them. Credit and a form of “machinery sharing” can be explored. In some cases however, the relatively more intensive labour needed in organic farms has actually created job opportunities in the rural areas. Women have been involved mostly in seedling production, weeding, care and maintenance, harvesting, sorting, grading and selling.

Scaling up to meet growing demand. The project initially linked farmers with an assembler company which supplies organic vegetables to the big Manila supermarkets. But farmers cannot meet the demand due to production constraints mentioned above and the growing demand within their villages and towns. Farmers get better prices and thus prefer direct sale in their towns to sending their vegetables to assemblers.

Linking smallholder farmers to export markets. Increasing production volume and value-adding is needed for smallholder farmer groups to join the export market. There are some local NGOs in Central and Northern Philippines which have helped farmer groups to export organic raw sugar (muscovado), rice, bananas and coconut products. Unless they are processed, the export of highly perishable products like organic vegetables is a big challenge.

Need for research and development. Many organic farming technologies being practised and promoted lack a sound scientific basis. Research should document and evaluate claims they are based on and also lead to the discovery of new products, methods or processes useful for organic farming. Currently, the Philippine National Standard (PNS) for Organic Fertilizers as well as the PNS for Organic Agriculture are being updated. Scientific research results will serve as a critical basis for the new standards and policies.

Review of existing agriculture programmes. At the national level, the department of agriculture runs programmes for conventional and organic farming. The aim is to provide options for both types of farmers. At the field level however, this has created uncertainty among agricultural technicians. Farmers are becoming confused because the agriculture technicians advocating organic agriculture are  the same people distributing GMO seeds, urea fertilisers and pesticide samples.

Timeline of organic agriculture development in the Philippines