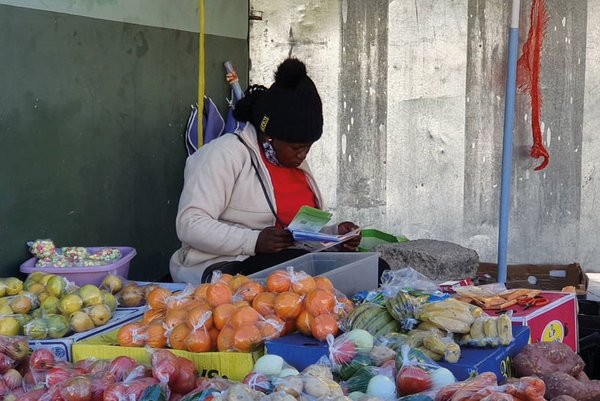 Civil society’s engagement for better nutrition – the case of Namibia

Just like in many other countries, the COVID-19 pandemic has revealed the weaknesses of the food system in Namibia. And it has shown that the multifaceted causes of malnutrition can only be tackled by coordinated multi-stakeholder action. Our author describes how existing structures can be revitalised for this purpose and the role that the newly founded Nutrition and Food Security Alliance of Namibia is playing in this context.

Namibia, the second most unequal society in the world according to World Bank data, is particularly challenged when it comes to hunger and malnutrition. In 2018, an ongoing economic recession escalated into a depression, while at the same time Namibia was experiencing one of the worst droughts in its history, with provisional crop harvests almost 50 per cent below the 20-year average production.

Poverty levels among Namibia’s population of ± 2.5 million remain disproportionately high and over a third of the population are unemployed. The Namibia Labour Force Survey from 2018 found that this particularly affects the youth, with 46.1 per cent under 35 years and 59.9 per cent under 25 years without employment. In addition, Namibia carries the heavy double burden of malnutrition, with a quarter of children (± 24%) stunted, chronically undernourished and at risk of insufficient brain development. Such stunting then again contributes to GDP losses of up to 16.5 per cent, hereby generating a vicious circle.  At the same time, Namibia – a meat-loving country with high sugar and fat consumption, where healthy diets are not yet all too popular – has adult obesity rates of almost 20 per cent.

All of the above was already the reality prior to COVID-19 and had serious implications for people’s health and lives, and these were the very painful symptoms of huge societal inequalities, as well as a clear lack of proper nutrition education and awareness. When the pandemic reached Namibia in March 2020, the country went into lockdown, hereby delaying the first wave, which is about to hit the country very soon, with an expected peak in cases around September. These measures sent the country’s economy – with tourism as a critical sector – into steep decline and have caused many people to lose their jobs. This particularly hurt those who were already not earning much and had no savings at all. They are among the 25 per cent of the population who can only afford to live in shacks in one of the urban informal settlements. The situation in rural areas is similarly dire, and sometimes even worse.

At the same time, however, countless private initiatives from companies and committed individuals – such as Co-Feed Namibia – across the country started collecting and distributing food to those in need, resulting in an unexpected wave of solidarity and support among Namibians from all walks of life. This also led to a growing awareness of the already existing huge inequalities, as people realised that many had to “stay at home” for weeks, with their whole family in a one-room shack, with only an outside toilet, and with no source of income and no food supplies.  In this regard, the Namibian government and international partners also put a variety of measures in place to reduce the heavy impact of Covid-19 on people’s lives and livelihoods, hereby also realising Namibia’s high dependency on food imports.

A national coordination structure for food and nutrition security

Already since 2017, the Namibian government had actually engaged multiple stakeholders to revive its multi-sectoral and multi-stakeholder Food and Nutrition Security Coordination Structures alongside an updated Food and Nutrition Security Policy and an accompanying Implementation Action Plan. All of these are expected to be finalised, approved and active before the end of 2020.

The new national coordination structure will receive high level support from Cabinet and the Prime Minister’s Office, with the Ministry of Agriculture, Water and Land Reform fulfilling critical function as the National Secretariat, which is to collaborate closely with sub-national secretaries. Attention was paid to not unnecessarily create costly new structures, but to build on existing ones, while focusing on improved communication, especially with the Ministry of Health and Social Services and other Government offices, ministries and agencies, as well as with non-government stakeholders and partner organisations. Such a complete overhaul of the system was necessary because Namibia’s very first multi-stakeholder platform, the Namibian Alliance for Improved Nutrition (NAFIN) through which the country joined the Global Scaling Up Nutrition (SUN) Movement in 2011, had become dormant in recent years.

It was against this background that in late 2018, the SUN Movement Pooled Funds offered support to Namibian civil society, academia and private sector in coming together and strengthening civil society’s involvement in nutrition-related matters. A 1.5 year-long participatory process led to the establishment of the Nutrition and Food Security Alliance of Namibia (NAFSAN) in late 2019. NAFSAN will be a key partner within the national coordination system at national and sub-national level and has contributed to the development of the future structure, policy and action plan. Together with its future members, NAFSAN will also play a key role in implementation, monitoring, reporting, educating and advocating for better nutrition and sustainable food security.

At this point, the private sector is not much involved in areas of nutrition and food security. Only the companies Namibia Dairies and Namib Mills have actively participated, for instance in food fortification. Hence, for the time being, the private sector has been included in NAFSAN as a civil society alliance, until there are a sufficient number of committed private sector organisations to establish an independent yet interdependent nutrition business network.

Overall, NAFSAN was only officially established in March 2020. It is therefore still in its infancy stages and needs to grow its membership base. Yet, in early April, prompted by the first COVID-19 cases in Namibia, NAFSAN collaborated with UNICEF and the Ministry of Health and Social Services in adapting existing national nutrition guidelines within the context of the new pandemic. Posters and flyers on Nutrition and Food Safety during COVID-19 were developed, and thanks to the fast and unbureaucratic financial support from various Namibia projects of Deutsche Gesellschaft für Internationale Zusammenarbeit (GIZ) they could be translated and printed in twelve local languages. Since April, and also now that the incidence of COVID-19 is on the rise, various local and international civil society organisations, academic institutions and UN agencies are supporting the distribution of these materials into the various regions and communities. NAFSAN’s proposal for initial funding towards organisational development and sustainability was approved by GIZ in June, so that operations for the first year until June 2021 are now approved. Simultaneously, NAFSAN has also officially become an active member of the SUN Civil Society Networks at a global and regional South and Eastern Africa level.

From permaculture gardening to mini-Zoominars

With such strong institutional support and financial security, NAFSAN is now able to focus on solidifying its internal good governance structures and tackling the tasks it has set itself: supporting the establishment of the national coordination structure, policy and action plan, reaching out to future members at national and sub-national levels, continuing to inform and educate the public through media appearances and a variety of educational information materials, and involving national and international high-level nutrition champions and influencers. Furthermore, it can now develop practical and participatory nutrition training especially for young people from marginalised communities, seek additional funding for practical projects that will be implemented by its member organisations, as well as secure funding for sustainably establishing itself at national and sub-national levels.

One of NAFSAN’s first practical projects currently in the pipeline is the development of a holistic, sustainable and scalable approach to combining permaculture gardening with practical nutrition in poverty-stricken informal settlements, in collaboration with already established and experienced member organisations who are known for their innovative approaches.

Overall, reaching and working with communities in urban and rural areas across the country through its member organisations is therefore one of the Alliance’s major focal areas. At the same time, information sharing, education, communication (IEC) and advocacy at national level are also crucial. Some IEC materials have already been developed, and Miss Namibia 2019 and the musician Kalux have already come on board as national nutrition champions/influencers. In this regard, one upcoming project is going to shed more light on Namibia’s nutritional landscape, some of its key role-players and their areas of work. It will be a series of short regular mini-Zoominars, scheduled for September and October, whereby all recordings are to be made available on NAFSAN’s website afterwards.

Until recently, Namibia was one of only nine African nations classified as upper-middle-income countries, which significantly reduced Namibia’s access to ‘soft loans’ and has led to a massive withdrawal of minor and major international donors and development partners, especially affecting the most vulnerable of Namibia’s population. However, now that Namibia has been re-classified as a middle-income country since mid-2020, its odds of receiving the support needed to address the humungous tasks ahead of successfully addressing severe hunger, malnutrition and major inequalities are starting to look much better again. This is something that is possible with transparent and collaborative efforts from within the country and with support from international partners and friends.

Ben Schernick is a social worker and mediator by profession who is based in Windhoek, Namibia. He has worked with civil society and international development organisations, as well as academic and government institutions in training, curriculum development, consulting, facilitating dialogue processes and project management. As from October 2018 he has facilitated the process leading up to the establishment of NAFSAN, and is currently serving as acting Director of its Secretariat.
Contact: info@nafsan.org; www.nafsan.org