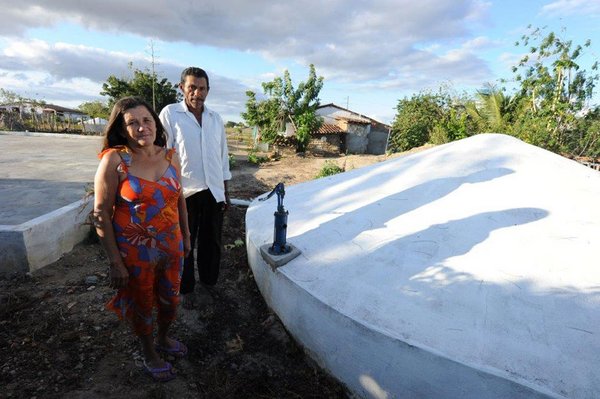 Family farmers Paulo and Josefa with water resource infrastructure on their farm in the Paraiba semiarid.
Photo: AS-PTA

For several decades, the organisation AS-PTA has been campaigning for sustainable rural development and family farming in a number of Brazilian Federal States. Knowledge exchange between farmers plays a crucial role in this context.

For over 35 years, AS-PTA – Agricultura Familiar e Agroecologia (family farming and agroecology) has been working, as a non-governmental organisation to promote patterns of sustainable rural development and the strengthening of family farming in Brazil. AS-PTA implements its actions via local programmes in the states of Paraná, Paraíba and Rio de Janeiro. The accumulated experience of the organisation throughout the years allowed it to provide evidence on how the agroecological approach helps family farmers to address the challenges that agricultural sustainability presents.

AS-PTA has advocated for the creation of several civil society networks, such as the National Coalition for Agroecology – ANA, aiming to promote sustainable rural development. While these civil society organisation (CSO) networks constitute spaces for collective learning, they also allow articulated actions by the organisations and social movements to advocate for the formulation, implementation and monitoring of public policies. At local level, this dialogue process takes place with distinct actors: in Paraíba, with the Borborema Pole, in Paraná, with the Triunfo Collective and in Rio de Janeiro, with the State Coalition for Agroecology, all of them networks formed by the community associations, organisations and unions of family farmers.

These local collective actors constitute the organic partners of AS-PTA regarding the implementation of projects and the participation of actors in all stages of planning, monitoring and management of the initiatives. AS-PTA’s work is based on sharing the management of the programmes with the farmers’ organisations, whether they are formally or informally constituted. It is in these processes that one of the rationales of AS-PTA’s work becomes more visible: valuing farmers’ local knowledge in their forms of organisation and management of their production but also regarding the management of their agroecosystems and their production techniques. Promoting farmer-to-farmer exchanges (see quote in Box), several actions are strengthened and gain recognition in the territory. It is also through valuing knowledge that AS-PTA promotes interdisciplinary exchanges to advance agroecological knowledge with partners in research institutes and universities.

In Paraíba state, AS-PTA develops its action in the Borborema Territory, covering 15 municipalities and directly reaching 6,200 farmer families in 404 farmer communities. The territory is located in the Brazilian semiarid region. The Brazilian semiarid is characterised by 63 per cent of its overall territory consisting of areas prone to desertification. Caatinga is an exclusive biome in Brazil. It has the most diverse biota in the world in terms of semiarid vegetation, although today, 68 per cent of its area  is already anthropised at several levels and is exposed to processes of environmental degradation.

Ninety-nine per cent of the municipalities in the areas prone to desertification still record Human Development Indices (HDI) that are inferior to the Brazilian average. The Brazilian semiarid concentrates 750 of the 1,000 with the lowest HDI and two thirds of Brazil’s poor. AS-PTA’s work experience in the region demonstrates that the poorer segments are not only exposed to more socioeconomic vulnerability but are also more excluded from the benefits of public policies for the region. These segments consist of families with little access to land (with farm units of up to three hectares). Women in general face strong obstacles to participating in the management of production systems and income access. Despite successes in developing several agroecological innovations, a patriarchal culture has remained dominant both within the family and in organisations. The inequality between men and women has been a barrier to full implementation of agroecology across the region, although a women’s movement for autonomy has been growing stronger over the last 15 years (for experience gathered by the network of women farmers in Paraíba state, see article in “Farming matters”).

Promising achievements in the region …

The following highlights some of the most significant results reached by AS-PTA Paraíba Programme in the last few years:

… and at national scale

At national scale, the following results ought to be mentioned:

For the development of public policies that promote sustainable food systems and sustainable patterns for rural development, AS-PTA has also taken action to create democratic spaces that allow CSOs and farmers to be heard in the formulation of policies. In 2012, PNAPO – the National Policy for Agroecology and Organic production – was launched, representing an important victory for civil society’s demands in the struggle for agroecological approaches to public policies. Programmes such as ATER Agroecologia (directed at extension services for agroecology) and ECOFORTE (support for territorial projects of agroecology networks) are included in the National Plan for Agroecology and Organic Production. Policies such as PNAE and PAA, established prior to PNAPO, also have shown an impressive impact on fomenting agroecology, family farming and nutrition and food security.

In the very recent context of political crises in Brazil, the programmes addressing agroecology have faced significant budget cuts and winding up of institutional bodies responsible for policy implementation. In spite of this, AS-PTA and civil society agroecology networks in Brazil have remained strong in their commitment to democratic legitimacy, a rights-based State and citizenship – for it is only under such circumstances that agroecology can be developed and scaled up.

“„The first step in implementing AS-PTA’s local development programmes was to talk with local farmer organisations and other kinds of groups, like church community groups, that could be interested in our proposals. The second step was to identify the main problems and potentials of the farmers’ agroecosystems and make an analysis of the main causes of the difficulties they identified. Through these participatory rural appraisals, farmer participants and technicians developed a common view of farmers’ problems and their possible causes, and a ranking of the more general and more important ones was established. Broadcasting the results of these operations as frequently as possible through local radio and television stations provoked curiosity in other communities not yet involved. Demands for visits to farmers interviewed in the media began to flood the community organisations’ network and required AS- PTA to take a systematic approach. The technicians created a group of farmer facilitators who were responsible for supporting these farmer-to-farmer exchanges.”
A founder of AS-PTA

Bruno Prado is a technical advisor and project manager in AS-PTA. He holds a master’s degree in social sciences and is also a researcher at CERESAN – the Reference Centre on Food and Nutrition Sovereignty and Security (CPDA/UFRRJ).
Contact: bruno@aspta.org.br