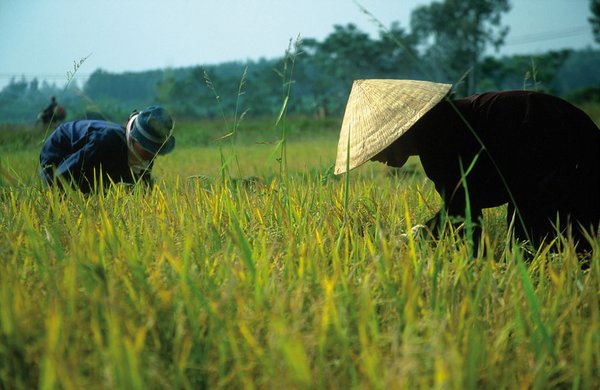 Most of the rice crop is consumed by the farming household.

A representative household study in north-western Vietnam shows that increasing maize output prices had a positive impact on net household income. In fact, this increase outweighed the negative impact of rising rice consumer prices in the past five years. During the same time, however, maize production had massive fluctuations of maize net revenue as well as sharply increasing input costs.

High world food price levels in the past five years and the recent food price increase in 2011 give reason for concern about pushing millions of poor people in low-income countries into hunger. However, not only do rural households in low-income countries spend a large proportion of their income on food, but most of them also generate a major share of their income from agriculture. Hence, the net impact of changing consumer and producer prices on household welfare can be positive or negative, depending on whether a household is a net buyer or net seller of agricultural commodities. The input intensity of agricultural production can further determine how changes in input cost impact on net revenue. In addition, rural households face increasing income variability. This escalates the risk of agricultural production, likely increasing pressure on households’ coping capacity and consumption stability.

Against this background, a representative household study at the University of Hohenheim (Stuttgart-Hohenheim, Germany) as part of the Uplands programme funded by the German Research Foundation (Deutsche Forschungsgemeinschaft – DFG) focuses on the impact of increasing rice and maize prices as well as increasing input costs on household income in a region in north-western Vietnam.

In the past five years, both rice consumer and maize producer prices increased considerably, by approximately 15 and 27 percent annually, respectively. The average impact of rising rice prices on household net income was moderately negative for net buyers (- 3 % per year) and slightly positive for net sellers (+ 2 % per year). On the other hand, all households benefited to a larger extent from rising maize producer prices. The joint effect of rising rice and maize prices on net household income was + 13 percent per year, on average.

In assessing the real change of household crop income, the development of input prices is as important as the development of output prices. Since 2006, fertiliser prices increased 10 percent and seed prices 19 percent annually, on average. The hike in input prices was severe, with the largest price leaps occurring in 2008 and 2009. In addition, the steady upward trend in maize prices exhibited a small decrease in 2008. Besides price changes, maize production was also impacted by regional weather events, such as a major drought in 2010. Consequently, net maize income in real terms was highly volatile, with a rise of about 84 percent in 2007 and a decrease of 18 percent the year after. However, even with a strong increase in input prices, maize price development in most of the years since 2006 has been sufficient to either keep net maize income at the same level or to even improve net maize income year by year (see Figure).

How did households cope with this volatile income? For households with low consumption and with limited access to insurance mechanisms, as is common in low-income countries, price shocks can lead to a depression in consumption if they are not mitigated by coping strategies. Hence, the impact of the 2008 maize income shock on household consumption expenditures in the post-harvest period was analysed. The analysis did not find a negative impact from the shock on household consumption expenditures. On the contrary, households were able to increase their consumption expenditures compared to the previous year. The most likely explanation is that the decline in income in 2008 cannot be understood as a shock to households given the large maize income increase the year before (2007), but rather constituted a drop to a normal level after a good year. This can be underlined by the fact that 88 percent of affected households did not engage in any coping strategy to deal with the decline in maize income. Households that did apply a coping strategy postponed making a long-term investment, such as purchasing a working animal or motorcycle, or were taking out a loan. It can therefore be assumed that households invested the extra income in 2007 into durable goods rather than in everyday consumption.

A notable difference in marketing maize since the price increase has been when producers decide to sell maize. Households actively tried to sell maize later in the season when maize prices were increasing. Following a repetitive trend of an intra-seasonal increase in maize prices, from 2006 to 2008, households gradually prolonged the time between the onset of the maize harvest and the selling time by about two weeks. Since traders come to villages, almost all farmers can negotiate with several traders and can therefore choose to wait for an acceptable price.

Options for farmers to adapt to maize price fluctuations remain limited. Generally, they have to sell their maize soon after the harvest to avoid severe post-harvest losses, obtain cash for their daily needs and pay back loans. Hence, policies are needed that help improve post-harvest management.

In particular, farmers in remote areas which are not well-connected to main roads can, in general, achieve rather low maize prices. Thus, maize market integration must be improved for areas facing structural disadvantages. Attention also needs to be given to improving formal rural financial institutions in the area. Even though informal input loans are widely accessible and farmers make use of them, prices paid for inputs by using a loan are 22 percent higher than the direct price. Furthermore, poor households have to pay a 21-percent higher interest rate on informal loans than better-off farmers. Increased access to formal credit and savings could improve the risk-coping capacity of households by providing insurance and supplying investment capital to advance maize production and promote income diversification.

Nonetheless, the high specialisation in maize production is a relatively risky income strategy given the high input intensity and the large maize income fluctuations observed. Production risk is further aggravated by severe soil erosion in the mountainous area, threatening the sustainable production of maize. Therefore, income diversification should be fostered in the long term.

The results from north-western Vietnam show that increasing maize producer prices could outweigh the impact of rising rice consumer prices on household income and that maize net revenue increased despite sharply rising input costs. However, maize net income proved to be highly variable. Therefore, policies are needed to improve the rural infrastructure and market environment and to support the adaptive capacity of households and their risk management strategies. In this regard, with its relatively uniform land distribution, basic infrastructure (roads, phones), basic education level, and access to inputs and a competitive maize market which enables farmers to benefit from increasing price levels, the area researched is already better off than many other low-income countries.