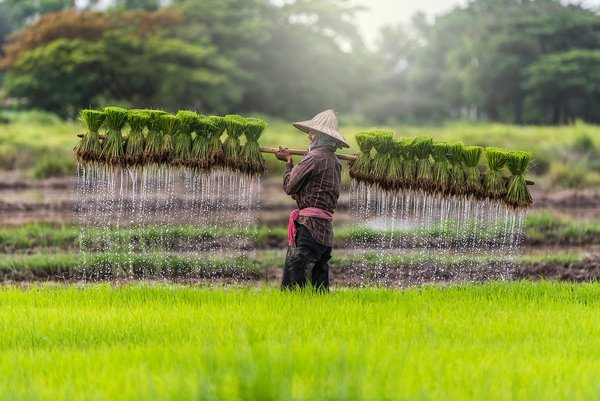 Rice plants are taking up more and more arsenic via their roots. Arsenic levels in groundwater are above all rising in Asia owing to increasing use of fertilisers.
Photo: ©Shutterstock

Rice cultivation bears the risk of contamination with arsenic, which can get into the rice grains via the plant’s roots. In tests of more than 4,000 rice varieties, a German-Chinese research consortium has now discovered a plant which can tolerate this toxin.

Agricultural cultivation of the staple food of rice bears a potential risk of contamination with arsenic, which can enter the rice grains via the plant’s roots. A German-Chinese research consortium headed by Professor Doctor Rüdiger Hell of Heidelberg University’s Centre for Organismal Studies (COS) in Germany and Professor Doctor Fang-Jie Zhao of China’s Nanjing Agricultural University studied  more than 4,000 rice varieties and have come up with a plant which tolerates the toxin. Although it thrives in fields contaminated with arsenic, its grains contain significantly less arsenic than other rice plants. And this variety has high levels of the trace element selenium.

As the researchers conducting the survey explain, especially in Asia, increasingly big quantities of the metalloid arsenic are entering the groundwater, for example as a result of large-scale fertilising or through sewage sludge. Since rice is cultivated in fields submerged in water, it absorbs particularly large amounts of arsenic via its roots. One of the results of this is that the potentially carcinogenic substance thus enters the food chain. According to Hell, levels of arsenic contamination are so high in some Asian soils that they are leading to substantial harvest losses, for arsenic is also poisonous for plants.

In their research project, the scientists exposed more than 4,000 rice varieties to water containing arsenic and followed their growth. Only one of the plants which they examined proved to be tolerant to the poisonous metalloid. This rice variety, called astol1, is distinguished biologically by a so-called point mutation in just one protein.

“This protein is part of a sensor complex and controls the formation of the amino acid cysteine, which is an important basic substance in the manufacture of phytochelatines. These substances bear a decontaminating effect and are formed by plants in response to harmful substances in order to neutralise them,” explains Hell, who is examining the role of this sensory complex with his team. Neutralised arsenic is stored in the plant’s roots before it can enter the edible rice grains and pose a threat to humans.

Field trials revealed that astol1 rice grains contain a third less arsenic than conventional rice grains which were also exposed to water with an arsenic content. In addition, the researchers detected a 75 per cent higher level of the vital trace element selenium, which is involved e.g. in producing thyroid gland hormones. In terms of grain yield, astol1 is no different from conventional high-yield rice varieties. This plant is therefore particularly suitable for agricultural use.

“In future, rice plants such as astol1 could be cultivated in regions contaminated with arsenic to provide the population with food while simultaneously contributing to combating food-conditioned selenium deficiency,” Dr Sheng-Kai Sun hopes.

Junior scientist Sun played a key role in discovering the rice variety while doing his doctorate at Nanjing Agricultural University. Since last year, supported by an Alexander von Humboldt Foundation grant, he has been conducting research on the sensory complex of astol1 at the Centre for Organismal Studies in the research teams of Hell and Doctor Markus Wirtz.

The research results have been published in the specialist journal “Nature Communications”.