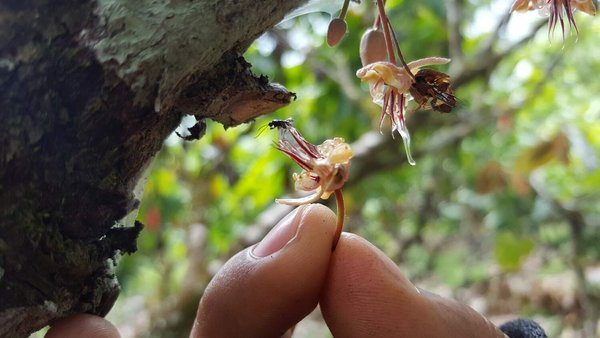 Cocoa, a major commodity globally, depends on insects for pollination. However, the cocoa pollinator’s identity is largely unknown and there are important knowledge gaps regarding landscape and farm-level management driving pollinators.

The importance of pollinators to ensure successful harvests and thus global food security is widely acknowledged. However, the specific pollinators for even major crops – such as cocoa – have not yet been identified and many questions still remain about sustainability, conservation and plantation management to enhance their populations and, thereby, pollination services.

Now, an international research team based in Central Sulawesi, Indonesia and led by the German University of Göttingen has found that in fact ants and flies – but not ceratopogonid midges as was previously thought – appear to play a crucial role. In addition, they found that promoting biodiversity-friendly landscapes, leaf-litter and trees providing shade in agroforestry systems were important to enhance tiny cocoa pollinators. The research was published in the journal Biological Conservation, in May 2021.

The team, in collaboration with Tadulako University in Palu, Indonesia, carried out two separate experiments involving 42 cocoa agroforestry farms in the Napu Valley of Central Sulawesi. The work included applying a sticky glue to over 15,000 flowers in more than 500 trees for an eight-month period and recording the identity and abundance of captured flower visitors.

In one experiment involving 18 farms, they investigated the effect of the distance between the forest and the farm, and of the amount of canopy cover from shade trees, on the abundance of the main pollinators. In the second experiment in 24 different cocoa farms, they measured the effect of leaf-litter management on pollinators. In both experiments they quantified the amount of forest and agroforests surrounding the 42 cocoa farms.

The researchers found that ants were the most common flower-visitors. This highlighted their potential as pollinators whether directly (by transporting pollen), or indirectly (by disturbing pollinators and promoting their movement).

The study also shows that preserving biodiversity-friendly landscapes, such as forests and agroforests, and promoting agroforestry systems are crucial for pollinator conservation. This in turn promotes pollination and sustainable cocoa production.

“We were surprised that we did not capture any ceratopogonid midges, even though these tiny midges were considered the most important pollinators of cocoa. This emphasizes that cocoa pollinators are more diverse than previously known but also that there is still much to learn,” said Dr Manuel Toledo-Hernández, from the University of Göttingen and first author of the study. “Current global cocoa initiatives should consider the role of biodiversity-friendly habitats for the conservation of pollinators, because their pollination services are an ecological alternative towards current commitments on combining high yields with conservation,” added Toledo-Hernández and his co-authors Teja Tscharntke and Thomas C. Wanger.